Learning from the Best: C. Auguste Dupin and Sherlock Holmes

"The trouble is that as usual you are so engrossed in the fact that you are oblivious to its environment."
- Nero Wolfe (Fer-de-Lance, 1934)

"Dupin was a very inferior fellow" and "by no means such a phenomenon as Poe appeared to imagine," opined Sherlock Holmes in A Study in Scarlet (1887) after his trusty companion, Dr. John Watson, mentioned that Holmes reminded him of Dupin – remarking that he had "no idea that such individuals did exist out of stories." Holmes may not have recognized an equal in Dupin, but the trick his Parisian counterpart employed to deliver the killer in "The Murders in the Rue Morgue" to his doorstep still worked for Holmes half a century later. No. I'm not referring to their first case.

First we've to go back to Paris, 1841, where the terrific shrieks rouse the inhabitants of the Rue Morgue to the doorstep of Madame L'Espanaya and her daughter, Mademoiselle Camille L'Espanaye, but the premise is secured from within and the gateway had to be forced with a crowbar. The cries had ceased by this time, however, when they moved upstairs they hear a pair of rough voices, but when the second and last door was broken down there was nobody there that was alive to tell them what had happened. Madame L'Espanaya was decapitated, Camille stuffed up the chimney and a crime-scene that resembles a battle field without an apparent escape route for the murderer – leaving the police baffled. All except for Dupin, who sees the plain truth in the sheer impossibility and brutality of the case as well as some great deductive reasoning on the multilingual perception of the voices that were heard from the locked, upper floor room.

One of Sherlock Holmes' cases of lesser repute, "The Adventure of Black Peter," collected in The Return of Sherlock Holmes (1903), provided the Great Detective with a problem that featured similar outré characteristics and his method echoed Dupin. 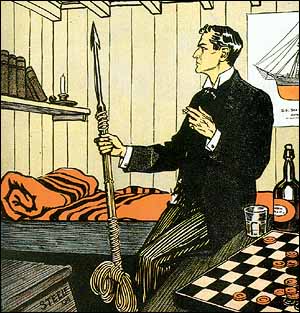 The retired Captain Peter Carey earned his nickname, "Black Peter," for his villainy and was known the flog his wife and daughter through the park in the dead of night and had a private retreat, a wooden outhouse he called the "cabin," which is where he died – pinned to the wall like a butterfly with a harpoon. Naturally, Holmes is ahead of the police, who arrest the wrong man along the way, reasoning where to look for the killer based on a pouch of tobacco and the strength needed to pin a rugged, ill-tempered seaman to the wall.

I don't want to cast any aspersions on Conan Doyle's character, but I suspect him of having had a bit of fun at the expensive of his readers who've read "The Murders in the Rue Morgue." I've always got the impression from this story that Doyle wanted to put the suggestion into the readers head that he's going for a similar solution, from the background of the characters to the force needed to pull off the crime, before presenting a far more rational answer as opposed to Poe's fancy solution – which made the whole story really nightmarish. That image of the murderer wielding a razor blade like a mad barber is perfect for a Tim Burton movie. With Johnny Depp as Dupin, of course!, and Jude Law as the nameless narrator. Just to screw with the Sherlock Holmes movie franchise. But seriously, I would love to see a Burton/Depp adaptation of Poe's Dupin.

At the end of the day, Dupin and Holmes reasoned truth from different clues that told in essence the same story, but their understanding of the physical strength involved made interpreting everything else all the more easier. And based on their deduction, Holmes followed Dupin's example to place an ad that lured the culprit to their rooms. But this begs the question... was remembering that story what made Holmes dash off to the butcher's shop, in the wee hours of the morning, for an experiment (we know he read Poe) and did he acknowledge this by using Dupin's ruse to ensnarl the murderer?

Well, I guess we simply don't have enough data to make a solid brick, but I always felt this story was as much in the Dupin/Poe spirit as "The Speckled Band," collected in The Adventures of Sherlock Holmes (1891), and The Sign of Four (1890) - even though it does not contain a locked room or an atmosphere of horror.
Geplaatst door TomCat on 5/11/2013