Closing the Gates of Hell

The name of Evan Hunter's alter ego, "Ed McBain," has become more noticeable, while perusing reviews and other related blog material, after having read Killer's Wedge (1957) – a story that warranted a follow up. One of the later novels in the 87th Precinct series, Tricks (1987), lured me with an appetizing synopsis of a Hellish shift on All Hallows' Eve. 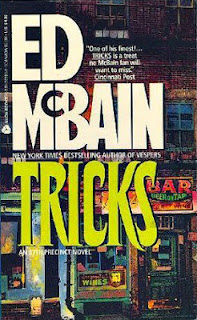 "Halloween ain't what it used to be," reflects Andy Parker in a police squad room that has not been that quiet probably since the construction of the building, and bored policemen with too much time on their hands begin to nurture work distorted fantasies of becoming (crime) writers. Before the dawn of the next day, those peaceful moments of them reminiscing in the squad room has become as distant a memory as the old cases they were talking about.

The first problem that's plaguing them is the disappearance of The Great Sebastian, who was reported missing by his wife, Marie Sebastiani, after discovering that her husband's van was gone and their stage props discarded on the sidewalk. And their apprentice/jack-of-all-trades, Jimmy Brayne, has vanished alongside the great magician himself. A fitting case for Halloween, but far more ghoulish is the murderer who's cruising the streets for spots to dump body parts, even posing a waist with a pair of trouser clad legs in an elevator, and these two plot treads represent the classics and weaved a traditional pattern that I very much appreciated – even if I caught on almost immediately to the tricks that were being played. Granted, McBain did not exactly made a secret out of the solution, especially if you know your classics, but I nonetheless enjoyed this part of the story and loved the Columbo-like pouncing at the end. But there's more!

A gang of costumed children are wreaking havoc on the streets, sticking up liquor stores and they shoot before dipping into the cash registry, which leaves a trail of bodies that lead the police to a blonde woman, who drives the kids around, and puts Carella and his men in the line of fire – wounding two of them. Obviously, not as traditional a crime story as the other threads, but hats off to McBain, he had me fooled on one aspect until they did something peculiar during the second (or was that third?) robbery. It's something you easily miss on an evening like Halloween.

Character-wise, the main protagonist of Trick was Eileen Burke, who's the bait in an undercover operation at Larry's sleazy bar at the Canal Zone, but on a previous assignment Burke was raped and the guy they’re after now is about as dangerous – and the question is if she can face her demons and not lose her head on this job. But the scenes between the murderer, a self-styled comedian, with first Sheryl, a regular of the district who may've been the next victim of The Ripper in Stitches (*rib poke* get it?), and than Eileen laughing at his jokes, while buying them drinks, gave this storyline an unusual angle. But, oh, how annoyed I was at foreseeing that there would be moment were Eileen was doubting that his intentions, even after feeling a knife in his pocket.

All in all, Tricks is a nice bag of treats with enough different flavors to satisfy a good portion of the readers huddling under the umbrella of crime/mystery fiction, from traditional puzzles to a character invested thriller story, and I think McBain is a great example of a writer who updated the detective story to modern standards without shrieking and repelling at the thought of having to plot as well.

In short: McBain is a keeper!