A Grave Must Be Deep

"A zombie, m'sieu, a zombie is one who has died but is not yet dead. A corpse resurrected by witch’s doctors magic from the grave."
- Comte de Limonade (Theodore Roscoe's Murder on the Way, 1935)

After posting my review of Sharyn McCrumb's Bimbos of the Death Sun (1987), a breezy detective story taking place during a Sci-Fi and Fantasy Con, I learned of a sequel with another outlandish title – Zombies of the Gene Pool (1992). I checked for the book and it was available, but what made it a grabber was the synopsis outlining a plot reminiscent of one of those pesky, untranslated neo-orthodox Japanese mysteries that Ho-Ling and Mousoukyoko blog about from time to time. 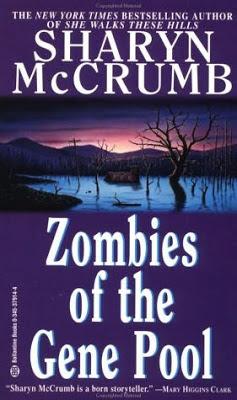 Zombies of the Gene Pool centers on a group of SF-writers/fans, who shared a farmhouse in Wall Hollow, Tennessee, and a dream of becoming celebrated fictioneers in the field they loved. In commemoration of their stay at the farm, they bury a time capsule, filled with handwritten stories, letters and memorabilia – like pulp magazines and a film poster of The War of the Worlds. That was back in the 1950s and some succeeded in catching up with their dreams, and over the decades, the anthology of unpublished stories grew in notable names from the realm of Sci-Fi. Unfortunately, the groups initial plans to retrieve the capsule in 1984 was thwarted when the valley, shortly after their departure, was flooded and turned into an artificial lake. Oh, well, cue sera, sera.

Fast forward to the early 1990s and maintenance work to the dam requires the lake to be drained and brings the farmhouses and dormant ghosts of the valley back to the surface. In a weird kind of way, it felt like a collision of Reginald Hill's On Beulah Heights (1998) and Charles Ardai’s "The Last Story," collected in The Return of the Black Widowers (2003), which also revolve around a drowned valley and an unpublished Sci-Fi anthology.

Dr. James Owen Mega from Bimbos of the Death Sun is referred to in this book mainly by his penname, "Jay Omega," and he still has a relationship with the sharp-tongued Dr. Marion Farley of the English department – and a colleague of theirs, Prof. Erik Giles, asks them a favor. Omega and Farley are invited as guests to a reunion, because they're the only ones who know about Giles' skeleton in the book-closet: he wrote science-fiction.

I have to mention here that the first two-thirds of the story concerns itself with fleshing out the characters, telling back stories of the failed attempt at attending Worldcon and the time capsule, peppered with critical satire of the fan community of the time, but nothing of the mundane and kept me reading at a steady pace. On the other hand, I feel forced to draw the conclusion that, from paper fanzines and dial-up bulletin boards to what we have now, we have not grown along with our technology. Yes. That conclusion is based solely on the depictions in this work of fiction and a casual glance at the internet. And I, for one, will welcome our new robotic overlords.

Anyway, one of the extraordinary things to happen, before the reunion is well under way, is the reappearance of the bêta noire to the community of SF-fans, Pat Malone, presumed to be among the dead for decades. Malone was the author of a single novel, River of Neptune, but achieved ever lasting notoriety when many within the community of fans felt his barbed tongue in his underground publication entitled The Last Fandango. Interestingly, McCrumb includes reproductions from old fanzines discussing Malone's death and, again, judging solely by this book, they were paper blogs that published reader comments on the previous issue. Technology appears to be the only difference between fanzines then and blogs/websites now.

Well, Malone has risen from the grave, but more as a malevolent specter than as zombie, because he's as spiteful as ever and knows what each member of the group has the hide from the world. This is still a mystery novel and with a hundred pages left to go, they find Malone slumped on the bathroom floor of his hotel room – victim of an apparent heart attack. While the group makes their expedition to the remnants of the farm to retrieve "The Dead Sea Scrolls of Science Fiction," Jay Omega crosses miles of land on the digital highway in a relative short time to gather information on Malone and piece together the puzzle before confronting all the suspects. The drawing out of the culprit was not as originally done as in Bimbos of the Death Sun, but as a mystery, Zombies of the Gene Pool was a richer story with a more involved plot and just enough clues not to make you feel cheated.

Another recommendation and enough to warrant a look at some of her other mystery novels.
Geplaatst door TomCat on 5/05/2013