Out of the Tidy, Clipped Maze of Fiction: More Real-Life Locked Room Mysteries

"Yet once or twice the miracle occurs; the scissors snip a rounded pattern; and with all its orchestra a-blare, life fashions a mightier melodrama than any we have dreamed of."
-  John Dickson Carr (The Murder of Sir Edmund Godfrey, 1936; "a Preface for Connoisseurs in Murder.")

If you remember from about a month ago, I compiled a summary of instances where "that tired old plot device," the Locked Room Mystery, crossed the line from fiction into reality and were, surprisingly, domestic in appearance – from a mystery writer's cat showing Edgar Allan Poe how the trick is done to a wizard who does not believe in miracles. 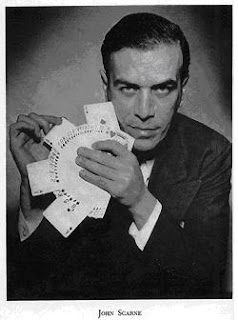 I know this place probably won't erupt in shrieks of surprise when I say that I wanted to do a follow up, but you'll be amazed when you learn of the treasure I found. A case that was cut in the rounded patterns of fiction, featuring a real-life example of a plot device that's even more unrealistic than an impossible crime, namely, an amateur detective who explains the miracle-crime.

John Scarne was a magician and author with a wealth of knowledge on gambling and con games, which helped him put a stop to the Blondie mob, five young women, who roughly scammed a $1 million from Los Angeles bookies in the 1940s. One particular bookie had what he called a "Horse Room," a sealed and soundproof room, where regular customers are entertained and encouraged to bet on horses. The bettors are sealed inside the room to prevent them for getting information on races before the bookies and the only communication with the outside is a single telephone-line, used to take outside bets and getting the results, which makes cheating impossible. Well, a blonde woman has won a hundred grand on bets and the bookie hired Scarne to see if, and how, she managed to cheat when she was locked-in like everyone else – and cut-off from outside communication.

One afternoon, it took Scarne one afternoon, to clear up the case and report to his employer that the person who has been supplying the blonde woman with the winning numbers was none other than himself! Before the inside woman placed a winning bet on, lets say, horse number 8, the bookie received a phone call from a confederate of the blonde, who knows the result of the race, to place three bets on another horse in a different race (like $10, $50 and $20) and asks him to repeat her bet – which leaves the other woman with nothing more to do than knocking off the zeroes and adding up what's left to know the number of the winning horse. It's a detective story that wrote itself! You can read an online account of this case here.

Not as nearly well documented and shrouded in obscurity is the time that the late Edward D. Hoch, King of the Short Stories, was engaged as a private consultant to look into a seemingly impossible theft that took place in mid-air. Steve Steinbock (now holding court in the Jury Box of the Ellery Queen Mystery Magazine) reported on this story on his now dormant blog, The Vorpal Blade, when Hoch passed away 2008. Here's the excerpt from that blog post:


"Ed once told me a true story of how a foreign government once hired Ed to consult on a real life impossible crime: cargo was apparently stolen from an airplane's locked cargo hold - while the airplane was in flight! Ed wasn't able to catch the thieves, but the incident was the inspiration for his story "The Liverpool Kiss" featuring master spy Jeffery Rand."

Ha! Ed wasn’t able to catch the thieves. Yeah, right. I’m sure that foreign government, full of embarrassment, kept everything under wraps after Hoch wandered into the hangar, sipping coffee and biting a donut, strolled around the airplane and told them how it was done. If Hoch had been given a few more years, Steinbock would’ve been given "a small libation," and sneaked in a Sherlockian quotation, "I did not know you quite so well in those days," before explaining how the cargo was purloined all those years ago.

And with that we're back into the tidy, clipped maze of fiction.
Geplaatst door TomCat on 5/10/2013