The Night Can Keep a Secret

"I often think that the night is more alive and more richly colored than the day."
- Vincent van Gogh.

John Dickson Carr's The Bride of Newgate (1950) represents his first foray into historical mysteries, taking the reader to the grimy and overcrowded Newgate Prison in 1815, where we intrude on the final hours of Dick Darwent's life – as he waits for the hollow tread of the hangman's boot that will escort him to the gallows for the murder of Lord Francis Orford. 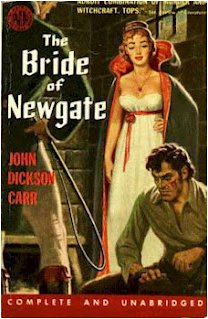 The official reading of the murder of Lord Francis Orford tells of a duel fought during the wee hours of the morning, but the defendant had a different story to tell. At first, anyway. Darwent declared that he was snatched from Hyde Park by a coachman, wrapped in a dirty coat stained with graveyard mould, and dropped off at the estate of Ordford, Kinsmere House, where he was shoved into a room occupied by the now departed Lord of the Manor – skewered to his chair with a French rapier. Next time Darwent opened his eyes, he was lying not far from his fencing school and next to him was the body of his supposed opponent. They do a check-up on Darwent's story, however, when the room is investigated they come to conclusion that it has been untouched for the past two years and because a room can't grow thick with dust and cobwebs overnight he's penciled in for an appointment with the hangman.

A less talented mystery writer would have had his hands full in coming up with a way to establish Darwent's innocence and explaining away a room that never was, but Carr was never a writer who preferred to side-step a problem and allowed Lady Caroline Ross and Sir John Buckstone to knock on the door of Dick Darwent's cell with an obscene proposition. Caroline wants to cash in on her grandfather's inheritance, but the old man's will states that she has to be married before her 25th birthday and this brought her to the condemned cell. She offers the fencing master fifty pounds to marry her on the eve of his execution and plans to enjoy widowhood with a champagne breakfast, as she watches how her husband is led to the scaffold and dropped through the trap-door with a stiff rope tied around his neck, and with nothing to lose (and intending to leave the money to his mistress, the actress Dolly Spencer) he agrees to become her husband for the remaining hours of his life.

I think the opening chapters of The Bride of Newgate form the strongest portion of this book. It not only sets-up a platform as strong as a gallows structure for the plot to stand on, but also gives us some solid, individual characterization as that dark, dismal prison cell seems to burst when the different personalities of the weakened Darwent, the haughty Sir John Buckstone, the ice-cold Caroline and the Reverend Horace Cotton, Ordinary of Newgate who stands up for Darwent, collide with one another and shows that John Dickson Carr was so much more than just a mere genre writer.

Of course, the trouble, for everyone who's involved in this case, really begins when Darwent's lawyer, Mr. Mulberry, appears with a last minute repeal and his clients not only finds himself a free man again but also a titled man with a wife he doesn't know and a mistress whose health has become a matter of grave concern – as well as fighting duels with gleaming swords and hand wrought dueling pistols and participating in a full-out riot at the Opera. Duels and brawls appear to be a staple of Carr's historical fiction and can also be found in such novels as The Devil in Velvet (1951) and Fire, Burn! (1957).

There's also the problem of the room that dilapidated and blackened with age over the course of a single night and an explanation for this miracle may provide them with a key that could unlock all of the answers for them. The solution is not bad, but, as is the case with the seemingly impossible disappearances of large objects (like trains and houses), the range of possible solutions are limited and this one sticks out not for coming up with something different, but how carefully and cleverly it was constructed. Because it's not just the problem of how to make a room disappear, but also finding a reasonable explanation why a room should disappear and I think Carr did an admirable job at providing an answer for that little side-puzzle.

All in all, this may very well be one of Carr's finest attempts at using the ghosts of past centuries as a backdrop for one of his ingenious schemes and the vividly sketched images of the condemned cell, the early morning duels, the brawl at the Opera and that eternal triangle between Darwent, Caroline and Dolly also makes this book stand on itself as a historical novel. In short, it's a little bit more than just your average detective story, but without throwing any of the fun or cleverness overboard.
Geplaatst door TomCat on 5/07/2012