A Smattering of Crime

Yesterday, I was condemned to kill a few hours and the gentle breeze rustling through the leaves of the trees in a sun soaked park seemed to beckon me, which would have been a perfect spot to crack open a detective story, were it not for the fact that I forgot to take one with me. Well, I remembered taking a book with me, however, I had accidentally stuffed a few magazines with me. Hey! Absentmindedness is a sure sign of genius, I think. After all, unconsciously, I had the brilliant foresight to take few random issues of Ellery Queen Mystery Magazine with me instead, part of a pile that I wanted to read for eons, so I settled down with an iced coffee, a bottle of iced water and a croissant and read the following stories. 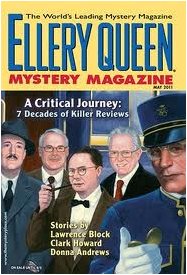 Oh, and no. I did not spend hours reading only this handful of stories, but, after a while, there was nothing left in them I wanted to read and decided to snoop around in a nearby bookstore. But more on that in the next post and now on to the stories:

The first of this batch of stories comes from one of today's champions of the locked room mystery, Paul Halter, whose "The Man with the Face of Clay" combines a curse, imported from the Middle East, with a miraculous murder offered up as proof. It begins when Archilles Stock tries to chalk up a lost on the record of his friend, Owen Burns, by inviting Miss White to their rooms to tell the tale of her late employer – the archeology enthusiast, Sir Jeremy Cavendish. On one of his latest digs, Sir Jeremy is cursed by one of the locals and upon his return to England he's visited by a creature, whose face resembles a grotesque mask molded from clay, after which he apparently commits suicide. The door was bolted from the inside and the French window, which was ajar, opened up on a sea of unbroken mud and freshly raked and undisturbed flowerbeds. Unfortunately, the solution is of a variety that never fails to disappoint me – no matter how well it was brought or motivated. But I have to say that Halter's strengths dominate his weaknesses when he's writing short stories. And having a good translator helps!

Keith McCarthy's "The Invisible Gunman" has another impossible crime for the reader to work their brains over: a master clock maker is shot to death in his shop and the murderer must have been his brother, they hated each other, but witnesses can place him inside his shop (across the street of his brother) at the time of the murder. Dr. Lance Elliot, his girlfriend Max and his eccentric father try to sort out this snafu. It has some clever misdirection and the solution gives us a neat twist on an otherwise hackneyed plot device. 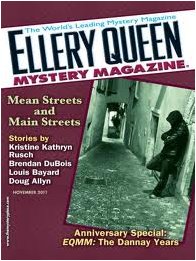 Norwegian author Richard Macker also penned a locked room story, "The Intell Club," in which Detective Inspector Rolf Owre takes a closer look at a suspicious suicide at a club for the intellectually gifted. The host of that night's meeting, Roger Aspvik, apparently locked himself up in the den and tasted cyanide before shooting himself. The story and setting are interesting, recalling the Columbo episode The Bye-Bye Sky-High IQ Murder Case (1977), but the solution was of exactly the same variety as the Paul Halter story.

One of the magazines also contained a re-print of Ellery Queen's "The Uncle from Australia." EQ is approached by the quintessential Australian uncle, who made a small fortune Down Under and returned to unload his wealth on either one of his two nephews or his niece. The only girl also turns out to be only one who will inherit, but her beneficiary is beginning to have second thoughts, afraid that the prospects of all that money might proof to be too tempting, and the brassy-looking Oriental paperknife in his back confirms his fears. The ending is a nod to a very famous whodunit and has the added bonus of a believable dying message.

Shamus Award winner Mike Wiecek, writing under the penname of "Mike Cooper," probed the problem of a murder committed in a hermitically sealed room, while the victim was alone, in "Whiz Bang" – which is the name of the complex where a retired billionaire was shot in a locked and moving elevator. A simple, but good, locked room mystery.

Yes, I picked the first cover for the sole reason that it has a portrait of all of the Armchair Reviewers on the front (including Carr and Boucher). The second cover is of the issue that has the Ellery Queen and Richard Macker stories.
Geplaatst door TomCat on 5/25/2012