Just Another Face in the Crowd

"With your ordinary sort of adversary, yes. But, given an enemy endowed with a certain amount of cunning, the facts are those which he happens to have selected."
- Excerpt from Maurice Leblanc's The Hollow Needle (1909).

Yesterday, a package arrived with the novel The Fiend with Twenty Faces (1936) by Edogawa Rampo, translated by Dan Luffey, wonderfully illustrated by Tim Smith 3 and prefaced by fellow mystery blogger Ho-Ling, which forced me to commit the blasphemous act of putting aside a John Dickson Carr novel to read this new acquisition before it ended up on that pile of unread mysteries for the next year or so – like was the case with the last Japanese mystery writer I tackled. 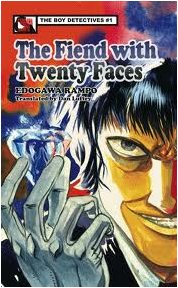 Well, first of all, I have to mention Ho-Ling's preface, in which he briskly sketches how The Boy Detectives series came into being, against a backdrop of ever-tightening government censorship, as well as drawing some interesting comparisons with the works of Maurice Leblanc and Gaston Leroux. It conveys a clear picture of what the series is about without spoiling any of the fun and gives you some understanding of its place in Japanese culture. I say "some" because a far, far away land where you can still hear the names of "Twenty Faces" and Akechi Kogoro on the streets of any neighborhood, not to mention bookstores everywhere stuffed with detective stories, impresses me as one of Chesterton's fleeting daydreams he had on a lazy afternoon when he dozed-off while imagining a new Father Brown story.

Anyway, I'm also glad that Ho-Ling penned this introduction because it gives me an opportunity to point out the atrocity that prefaced the Dybbuk Press edition of Israel Zangwill's The Big Bow Mystery (1891), which is a gem of an example of someone who hasn't the faintest idea what he's talking about or even seems aware of Google and Wikipedia. Inspector Poirot?! Really? In my opinion, it's the end-all argument in favor of taking away the right to freely write introductions for detective stories unless you can scroll through a list of names on the GADWiki without starting to look like a fish gasping for water. But on the review, shall we?

The Fiend with Twenty Faces was originally published as a serialization in Shonen Kurabu (Boy's Club), a magazine for children that began its circulation in 1914, and the battle-of-wits between the master detective Akechi Kogoro and the fleeting figure of the criminal with even more crimes than faces to his name has captured generation of readers ever since. "Twenty Faces" is a crook with the same old-school courtesy as his French counterpart, Arsène Lupin, when it comes to warning his victims before harvesting the paintings from their walls and ripping statues from their plinths – which is exactly what Mr. Hashiba found between his mail at the opening of this book.

Mr. Hashiba has in his possession a handful of diamonds, once encrusted in the crown of the House of Romanov, functioning now as their family heirlooms and wants to hold on to them, but they are swiped from underneath his nose effortlessly, however, the escape of the titular thief was a bit more problematic thanks to Mr. Hashiba's son Soji. Naturally, this does not bode well with the master criminal and kidnaps the boy to demand another one of the Hashiba's family treasure's as compensation and desperately the family summons Akechi Kogoro to their home, but the detective is abroad and in his place comes his assistant – a boy of ten or twelve years named Kobayashi Yoshio. However, do not allow his size and age to fool you as he's unusual bright and came very close to single handily defeating "Twenty Faces" before his mentor stepped into the picture.

What ensues is an adventure that reminded me at times of Tom's run-in with a gang of kidnappers in J. Jefferson Farjeon's Holiday Express (1935) and this book can be recommended to readers who enjoyed that particular story and to fans of Eoin Colfer's Half-Moon Investigations (2006), but I don't think, to be completely honest, that the book will excite the crowd of hungry mystery fans craving for more translations of Soji Shimada and Seichi Yokomizo. As fun as The Fiend with Twenty Faces is, it's also a bit too cute when it throws "twists" and "surprising revelations" around that you foresaw one or two chapters before officially being led in on the secret. No doubt this is engrossing stuff if you are 8-10 years old, but without the cultural or nostalgia factor it will do very little for older western readers, I'm afraid. Still, it's a nice book to indoctrinate the more impressionable minds among our families and friends and help them cultivate an appreciation for detective stories.

You have to admit that you were not expecting a review of this book from me anytime soon, now were you Ho-Ling? :)
Geplaatst door TomCat on 5/04/2012