A Whiff of Gunpowder

“By the pricking of my thumbs,
something wicked this way comes.”
- William Shakespeare’s Macbeth (Act IV, Scene I)

We're going to extend our stay in the London of the Georgian Era and Regency Period to cover the events in A Wicked Way to Die (1973), a historical mystery penned by "Jeremy Sturrock," the nom-de-plume of Ben Healey (1908-1988), who wrote a slew of detective novels set during the dawn of the 19th century and follows the career of a well-known, womanizing and raunchy Bow Street Runner named Jeremy Sturrock.

I pumped more than one search engine for information on either Sturrock or Healey, but the results that were returned to me were meager to say the least. A rather late-bloomer in the genre, Healey did not publish his first detective novel, The Village of Rogues, until 1972 and they were distributed in the United States under the penname J.G. Jeffreys – which is sort of ironic if you think about it. Having a character share an alias with their creator always struck me as something typical American (e.g. Ellery Queen and Anthony Abbot) and the one Briton who does it gets re-branded before entering the Americas. I'm kind of curious as to what triggered this departure from series (written as if it was a first-hand account from Jeremy Sturrock himself). Was it a conscious decision to distance the stories away from their predecessors or because his publisher feared that American readers would be confused? 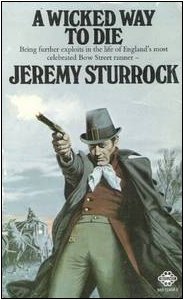 Anyhow, on to the review of A Wicked Way to Die, which refers to the circumstances in which actor Bob Mytton exchanged the interim of life for the eternal slumber of death and the backdrop for his final act is behind the locked door of the women's dressing room of the Theatre Royal, Drury Lane, where the thespian apparently shot himself in the mouth during a performance. The death of Bob Mytton has all the earmarks of a suicide, but Jeremy Sturrock suspects murder based on the fact that his eyes were closed and that the victim had his forefinger on the trigger instead of his thumb.

From this brief description, you could make the assertion that Healey's output is closely related to the historical romances penned by John Dickson Carr, but having read The Bride of Newgate (1950) and A Wicked Way to Die back-to-back I can assure you that this is not the case. Carr was a romanticist while Healey was merely bawdy and coarse, which, perhaps, gives a more accurate picture of London life in the early 1800s, but it was also far less fun and clever – in spite of working with a lot of themes that are a staple of Carr's (historical) fiction (including an unexciting duel). The set-up to the locked room was intriguing, but the solution he proposed should only be uttered by a Hastings-like character before it's dismissed as nonsense, however, I have to give him props for using the locked room as a clue that helped identify the guilty party. This was even pointed out in an EQ-like Challenge to the Reader:

"I have set down everything most precisely for your consideration and being a lady or gentleman of near enough as good wit as my own—else you would not be reading this book; which I pray you have purchased honestly and not merely borrowed or stolen—you will by now know as much as I did at this turn. So no doubt you will have seen through that trick of the locked door, the only way it could be done, thus perceiving that I had five or six interested parties from which to choose the villain or villains..."

All in all, this is not to say that I don't like Healey, who obviously had his heart in the right place as a mystery writer, I just think (based on my reading of this book) that he wasn't very good at it, however, I would still recommend this novel to people who read historical fiction for their period settings and characters.
Geplaatst door TomCat on 5/09/2012