"But when I was there it was strange – I suddenly had this feeling that everything was connected. It was like I could see the whole thing; one long chain of events... It was like a perfect pattern laid out in front of me and I realized that we were all part of it, and all trapped by it."
- Eric Finch (V for Vendetta, 2006)

According to the summary biography on the back cover of his detective novel Good Night, Sheriff (1941), Harrison R. Steeves was a professor of English at Columbia College who moonlighted as a literary-legal consultant and appeared in a number of settlements over literary property in that capacity. He wrote his sole detective story after he had recuperated from an unspecified illness and the book was published on his sixtieth birthday. The inspiration for the book came when he was on the road to recovery, which was paved with dozens of mystery novels, leaving him convinced that he could pull a better trick and I'm glad to report that it wasn’t half bad – making me somewhat curious as to whom Steeves had been reading when his sickness bound him to his bed and books. 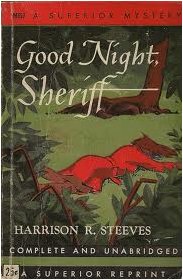 Good Night, Sheriff sets about several weeks after the unfortunate passing of Mrs. Agnes Earlie, wife of Dr. Thomas Earlie, who was found dead in an open clearing alongside the road soaked from the torrents of rain that followed in the wake of an unseasonably sultry day in early November – felled by a bullet to the head. The general consensus is that Mrs. Earlie was accidentally hit by a "lost bullet" from a hunter's rifle, after all, it had happened before many years ago, but the insurance company who has to cough up twenty grand to Agnes Earlie's dying sister, Olivia, have their doubts and send Dr. Patterson to Mercer to look into the matter.

Dr. Patterson is also the story's narrator and interestingly enough, he was nameless for the first quarter (or so) of the book and this raises an interesting question: was he meant to be a nameless detective? Steeves dedicated the book to everyone who provided him with criticism and this effectually "knocked about, chopped, kneaded and hackled" the plot until it was in its present form, which, once again, according to Steeves himself, differed quite a bit from the first fair copy of the book. I can easily imagine one of his proofreaders suggesting that an anonymous narrator puts a distance between the character and the reader. The name Patterson is mentioned only a dozen or so times over the course of two-hundred-and-fifty pages and it sometimes struck me as if the name was wedged in between the text as an afterthought.

Nevertheless, Patterson proves himself to be an excellent, semi-official investigator as he sifts through the evidence, building up theories and talks with the people who are involved (like a local woodsman and the victims brother-in-law) – making this a very slow-moving and mostly sedentary detective story. No car chases and shoot-outs between the pages of this crime novel. Heck, the final seventy pages basically consist of one long conversation between Patterson and the person he tagged as the murderer. It's a fascinating accumulation of chapters, in which clues (both physical and psychological) are analyzed and form a "Prison of Logic" around the suspect. This even yields an unusual, but satisfying, motive for murder and this would've ended the book on a high note, but Steeves made an amateurish mistake when he attempted to spin a final twist that would turn the case up-side down.

In a final conversation with the Sheriff of Mercer, Patterson and the reader suddenly learns that everything they know of the murder also fits another, more inconspicuous, character and that's just a flat-out cheat! Was I surprised? Yes. Was I pleased? Not really. A cheap "surprise" like that felt unworthy of such a cerebral detective story. Still, if you can look past the final ten pages and you enjoy this kind of slow moving unraveling of a plot than it might be a book that could interest you. But be warned, this is not a book you are likely to finish over the coarse of a day or two. Somehow, I began to read slower and slower as I left one chapter after another behind me. It took me nearly a week to reach the final quarter.
Geplaatst door TomCat on 5/22/2012