"The monsters made me do it."
- a poor excuse 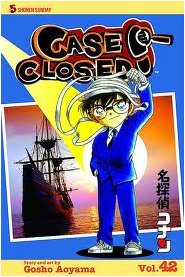 The 42nd volume of Case Closed, also known under its former title Detective Conan, opens with the resolution of the story that closed the previous collection of stories, in which Conan and Anita visit the old dwelling of her sister, serving now as an illustrators studio, to retrieve a (hidden) message from her sister. Of course, one of the illustrators is poisoned right under their nooses and it's up to the kid-sized gumshoe to figure out how the poison was introduced to the victim and by whom, before they can pick up that message from the past. A very good story with some solid detection and a clever, but risky, method for murder that cleans itself up after the dirty deed is done!

Rachel, Serena and their English teacher, Jodie Saintemillion, don the deerstalker and the Inverness coat in the next story to help out a former class-mate, Aya Nanakawa, who stands in the shadow of suspicion of having stolen from her employer – a convenience store owner. The store's earnings and leftover stock are unbalanced and this only happens when Aya closes. Newly installed surveillance cameras eliminated the possibility of shoplifters and nightly stakeouts did the same with burglars. A borderline locked room mystery! It's a simple, but nifty, story with an ample amount of detection, clueing and a nice solution that made a respectful bow to one of Conan Doyle's stories.

The next story is the main event of this volume, in which several of the series regulars receive an invitation, signed with Vermouth, for a party set on a creaky ghost ship and everyone has to come dressed up as a famous creature of the night usually found stumbling and crawling around in late-night B-horror movies. Once the ship swarms with "grizzly ghouls from every tomb" a murderous atmosphere swept its deck and the captain of the ship ends up with crossbow bolt in his chest. The solution hinges on an interesting combination of classic misdirection aided by modern technology, which I thought was neatly done, but, to be honest, I think this is also one of those stories that will turn away older mystery fans from the series. I'm afraid the disguises and identity swaps in this one may be a tad bit too campy (or comicy?) for them.

Nevertheless, it's also an important story because a number of the questions raised in previous collections are finally answered, concerning characters like Jodie Saintemillion and Vermouth, making this entry in the series nothing short of a feast if you read them for the ongoing storyline (involving The Black Organization and their dark garbed agents) and the (semi) regular characters. The final chapter sets-up a new story, involving the Detective Boys and a knife-wielding fiend, but it felt very out of place in this volume.

All in all, this was one of the strongest volumes in some time with some really clever detective stories and the ongoing storyline, involving a number of important characters, got a real boost in the second half of the book. It will still take some time before Aoyama has undraped the entire mystery that drives this series, but it are volumes like this one that keeps us fans coming back for more.
Geplaatst door TomCat on 5/20/2012