"We watched the ghostly dancers spin
To sound of horn and violin,
Like black leaves wheeling in the wind.
Like wire-pulled automatons,
Slim silhouetted skeletons
Went sidling through the slow quadrille."
- Oscar Wilde (The Harlot's House, 1885)

The sometimes absently-minded proprietor of Pretty Sinister Books, John Norris, dropped a comment on another blog, in which he was clearly amused at how hopelessly stuck me and Patrick are in the post-GAD era – and how we'll probably never find the yellow brick road back to the past if we continue to look the other way when Paul Doherty, Bill Pronzini and Paul Halter mischievously lock up the ghosts of John Dickson Carr, Kelley Roos and Ellery Queen in the cupboard. But in our defense, we infelicitously picked the phrase post-GAD to label the books we discuss on here that were published after the 1940s, when Neo-GAD would've been a far more accurate description.
And none of these contemporary writers, emerging during the last four decades, radiated with a brighter afterglow than the late Herbert Resnicow – who was a living and breathing fossil in his day. Not only did he keep the form alive with elaborate plotting and fair-play clueing, but his stories read and feel like genuine GAD mysteries resettled in the 1980s. The fact that every single one of them copes with a murder committed under apparently impossible circumstances is the coup de grâce! 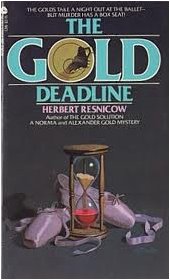 The Gold Deadline (1984) opens with Alexander and Norma Gold receiving an invitation from billionaire Max Baron to attend a performance of the Boguslav Ballet, which has to serve as a cover that dresses up business talk as a social engagement – since he doesn't want the world to know that he's consulting a private detective. But halfway through the performance, the curtain separating them from the adjoining box-seat parted, and like an apparition at the bedside of Ebenezer Scrooge, the paling countenance of Max's son, Jeffrey, appears to inform them that his employer has been stabbed while he was alone with him in the box – and guess who cops want to tag for that murder?
Max Baron takes on Alexander and Norma Gold to exonerate Jeffrey from the murder charge that is suspended over his head like the Sword of Damocles, but they have a deadline of less than three days to do so and collect the biggest paycheck in their lives.
If you never had an opportunity to meet and watch the bantering behemoths at work, than you've been missing out on a few good chuckles. Alexander and Norma could've been the result of splicing and stitching together the genetic materials of Nero Wolfe and Archie Goodwin with those of Jeff and Haila Troy, but don't presume that they are merely theatrical puppets with clowns make-up on who solve a murder in-between bouncing risible comments off each other. They are well-characterized personages, however, their literary father wasn't laboring under the misapprehension that he was writing fiction that addressed the disintegration of society but simply 200-pages of intelligent escapism – and therefore allowed his characters to have a bit fun besides dealing with lives problems. As a result (and I have to warn the literary thriller fans here), Alexander and Norma are allowed to play detectives to their hearts content and spend a considerable amount of time on working out how the murder was executed and who was responsible.
The murder of the detestable impresario, Viktor Boguslav, is a doozy. Not only do the wedded gumshoes have to figure out a way to enter a theatre box, when the only door is latched from the inside, stab Boguslav without disturbing a snoozing Jeffrew or being witnessed by anyone of the hundreds of spectators and sneak out again undetected – not to mention the baffling fact that the impresario didn't struggle with his assailant or called out for help.
In a previous review, I pointed out that Resnicow's closed environment diverged from the traditional sealed rooms and guarded spaces. The locked rooms in his novels are wide-open spaces, from an entire top-floor apartment to a multi-level archaic chamber, but still manage to lock them as tightly shut as the typical locked study or bedroom. A theatre box seems therefore a little bit claustrophobic in comparison with previous stories, but the way in which practically employs the entire building through out the story not only reflects the experience of civil engineer with a lifelong working experience in construction work, but also that of a bona fide talent in constructing complex plots.
The solution, perhaps, stretches credulity, but you have to give Resnicow props here for coming up with yet another original take on the locked room and adroitly avoiding one of the most dangerous pitfalls of all by logically explaining why anyone would go to such insane and risky lengths to create the illusion of an impossible murder.
All in all, this is an immensely amusing and interesting detective novel, which does not only spin an enigmatic problem for the reader, but also allows you to catch a glimpse of what goes on behind the curtains of a ballet company and the characters that prance around there. Resnicow openly confessed his love and respect for ballet at the opening of the book and this is reflected in the story, especially when Norma lovely describes her favorite piece, Petrouchka, in which a rag-doll comes to life, falls in love and is killed for his humanity.
Resnicow shows here that entertainment can be both lighthearted as well as intellectually satisfying. Why he's all but forgotten today is beyond me.
The Alexander and Norma Gold series:
The Gold Solution (1983)
The Gold Deadline (1984)
The Gold Frame (1986)
The Gold Curse (1986)
The Gold Gamble (1989)
The Ed and Warren Bear series:
The Dead Room (1987)
The Hot Place (1990)
Geplaatst door TomCat on 10/05/2011