What's Up in the Attic?

"Enjoy the fantasy, the fun, the stories... but make sure there is a clear sharp line drawn on the floor, so you can step back behind that mark and re-embrace reality... to do otherwise is to embrace madness."
- James Randi, the magician who explains miracles.

When I first learned of the detective stories penned by Paul Halter, it was the name of John Dickson Carr that captured the attention of this locked room enthusiast. Halter naturally found, what can be described as, divine inspiration in the myriad of books left to us mere mortals by the Greatest Player who ever participated in the Grandest Game in the World – and his most ardent followers were ready to tear his mantle from Edward Hoch's back and drape it across Halter's shoulder. That piqued my interest, to say the least, and the collection of short stories, The Night of the Wolf (2006), entailed a lot of promise and contains one or two gems, like "The Abominable Snowman" and "The Flower Girl," that will most likely became staples of future locked room anthologies.
This probably explains why I ended up disillusioned with Paul Halter, after reading The Lord of Misrule (1994) earlier this year. I expected to witness first hand the second advent of the greatest mystery writer who had ever lived, but instead was treated to a fairly standard and flawed detective story. In spite of its fantastical premise, it lacked the atmospheric touches and clueing you'd expect from John Dickson Carr's heir. But worst of all, there was no sense of time and place, which is not an unimportant element if you decide to set a story at the turn of the previous century, and the ghost-like presence of the masked figure, cloaked in black, who's accompanied by the tinkling of sleigh-bells never became the terrifying hobgoblin like any of the nightmares dreamed up by Carr and Talbot.
So evidently, I concluded that this Gallic scribe has a heart that beats in the right place and valorously tries to continue a tradition that's truly worthy of being preserved, but that he was only a second-stringer at best – at least as far as novel length narratives are concerned. Well, last night I blazed through his second roman fleuve, The Fourth Door (1987), and I was wrong. Stylistically, it has the same flaws as The Lord of Misrule, but plot-wise, it has nearly everything you hope to find in a locked room story – and the patterns that emerge from the plot will both fascinate and please the most demanding mystery readers. 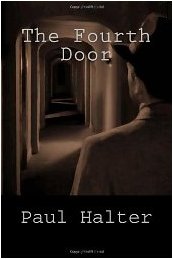 The Fourth Door is set in a small, undesignated hamlet during the early 1950s where three befriended households, the Whites, the Stevenses and the Darnleys, are torn asunder by supernatural events and several, seemingly impossible, murders with most of the otherworldly activity coming from the attic room in the home of Mr. Darnley – where his wife killed herself years previously. At least, it was presumed to be a suicide since the door and windows were locked and fastened on the inside. Lodgers reported footsteps emanating from the room and neighbors witnessed a glowing light passing the attic windows. Needless to say, none of these lodgers roomed very long with Mr. Darnley.
That is, until Patrick and Alice Latimer arrive in town, one of them apparently endowed with the mediumistic gift to communicate with the spirit realm, who promptly take up their residence at the reputedly haunted house – and from there on out the fabric of reality begins to slowly disintegrate. The events that followed include a séance, during which Alice Latimer is able to answer a question written down and sealed away in an envelope, and someone who's seen at two different location, at exactly the same moment, before disappearing for the stretch of three years are only a prelude to an even more baffling occurance – a murder in a sealed attic room!
As an experiment, in the hopes of establishing a better line of communication with the ghost of Mrs. Darnley to find out who murdered her, the spiritualist Patrick Latimer will hold an all-night vigil in the haunted room, which is not only locked but also sealed with wax and stamped with an imprint of a rare and unique coin – picked at the last moment from a collection of 600 of such specimens and never left the hands of the witness after the room was sealed up. But when they break open the door, Patrick Latimer has evanesced and in his place, sprawled on the floor, lies body of another man with the handle of a knife protruding from his back! 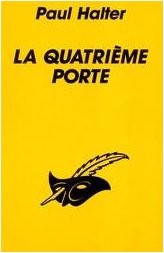 The construction of the sealed room illusion is quite simply brilliant and I feel very smug for having stumbled on the main gist of the trick before it was even put up for performance. When the corridor and lay-out of the attic was described, I immediately knew how the trick would be pulled off and only missed out on the finer, more subtle details. The part I got wrong was actually embarrassing clumsy compared to what actually happened. I also have to commend Halter here for motivating this elaborate set-up and why anyone should go to all that trouble to create a supernatural crime.
There's also a second murder, committed in a house whose immediate surrounding is carpeted in an expanse of un-trodden snow, which has a delightfully simple, as well as shocking, solution – and even better motivated than the first one. As noted in the story, it's quite possibly unique in the genre. No mean feat!
Plot-wise, this is as good as they come and the cleverly constructed, multi-layered solutions are the impetus that drives our undying love for these stories. Nevertheless, I have to state here, empathically, that in spite of these triumphs I still wouldn't rank Paul Halter alongside John Dickson Carr. The fact that he writes detective stories in which people are bumped off in sealed environments at the hands of apparent supernatural agencies are not the main reason why we read the tales from the grandmaster of this particular sub-genre, but for the gripping narrative that gradually tightens its iron-glad grip around your throat and impresses you with the dread that every shadowy nook harbors unimaginable horrors.
I never had even as much as an inkling of this feeling with this book nor was there any genuine sense of time and place. There were several references to the mounting terror in the village, but merely stating that the atmosphere was threatening does very little to convey that feeling to the reader. The only time he came close was the part with "the cold hands," but that arose from the plot that had become so complex and turned upside down at that point in the story that you couldn't help but feel bewildered. Another problem was the village setting. Which village? Throughout the story you get the idea the entire village consists of only three houses and is only inhabited by the characters that live in them.
So I would have to disagree with those who stated that Paul Halter did everything right in The Fourth Door, but I will concede that he more than delivered on the parts that really mattered. It's one of the most intricately constructed detective stories I have read this year, with a plot that twists and coils like a boa-constrictor in an epileptic fit, and I was enthralled with the patterns that emerged from the plot. I said it best in my review of Marco Books' De laatste kans (2011), "It's not entirely unlike watching someone emanating perfect circles of smoke that seem to playfully interact with one another."
To sum it up, this is nothing short of a tour-de-force of plotting and restored the faith I had lost after the previous novel – and the mystery community owes John Pugmire one for his untiringly efforts to bring his stories to an international audience. You can help him with this by simply picking up a copy of The Fourth Door and enjoying the story, and, if possibly, share your thoughts with the rest of us.
Geplaatst door TomCat on 10/02/2011