The Slaying of the Slayers

Before I pull the next tome from its drawer and cart its stiffened pages into the autopsy room to provide you with an in-depth, post-mortem examination of its plot and writing, I have to nudge you in the direction of another review of mine that was co-written with a fellow Connoisseur of Crime and put up on his blog. Over At the Scene of the Crime, Patrick is marking the occasion of his 100th post with a series of collaborative reviews and for our joint effort we looked at Paul Doherty's first Judge Amerotke novel – The Mask of Ra (1998), in which Pharaoh Tuthmosis II succumbs to the noxious effects of an apparently impossible snakebite. I recommend going over that crime-scene after you're done here. 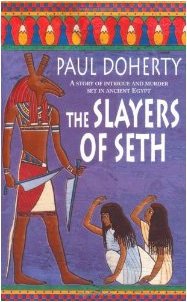 Today's tale of intrigue and murder also happens to be a volume from the set of books chronicling the storied career of the Chief Judge of Thebes, The Slayers of Seth (2001), which is Lord Amerotke's fourth recorded outing – and turned out to be quite a different story than the one I was expecting to find. It was tipped to me as a locked room mystery, but unlike its predecessors, there were no impossibilities and it was more of a thriller than a proper detective story. Granted, it's an excellent, blood-curdling yarn, however, I was hoping to find a plot that could match, or even out do, The Anubis Slayings (2000).
The characters who have a central role in this story are the titular slayers of the red-haired god of death, a small band of veteran soldiers who brought the grandfather of the reigning Pharaoh-Queen, Hatusu, a decisive victory over the invading armies of the Hyksos by courageously infiltrating an enemy campside and chopping-off the head of their mascot witch – who proclaimed to be the earthly reincarnation of the snake goddess Meretseger. This broke the heart and soul of their enemy and they were easily trampled in the succeeding battle.
When they returned home, the brave soldiers were treated to a hero's homecoming and the spoils of conquest consisted of a severed head, sacred Scorpion Cups and a glorious victory over a sworn enemy. Individually, they were bestowed with enermous riches, awarded honorable titles and their exploits on the battlefield became the stuff of legends, but the curse of the witch, spoken mere second before losing her head completely, looms over them like the blood-tinged shadow of their patron saint – and after the sands of time covered three decades a cloaked and masked figure appears out of nothing and begins picking them off one after another. And somehow, this deluge of bloodshed is closely connected with the poisoning of a young, ambitious scribe whose ambition was to become the betrothed of the daughter of one of the slayers and this youthful girl is now on trial in The Hall of Two Truths for his murder. But Amerotke believes there's more beneath the exterior of this case then meets the eye and more than once he nearly paid with his life for venturing too close to the truth.
As a tale of blood-soaked vengeance, adrenaline fuelled thrills and antediluvian perils wrapped up as a suspenseful serial killer story it's first rate, no argument there, but I think Doherty cheated himself out of creating a minor masterpiece with not even hiding a single clue – which would've made the excellent dénouement also a satisfying one.
This self-appointed slayer of the slayers, whose presence is that like of a shadow, is the best culprit I encountered in this series thus far and when this person finally sheds the stained cloak and mask you find someone who's both remorseless as well as very human – with a very powerful and understandable motive. But the lack of clueing makes it impossible to anticipate or feel pleasantly surprised and there was definitely a missed opportunity with the murder of one of the generals by not securely locking the door and windows of The Red Chapel from the inside. Clues and a locked room killing could've easily turned this story in a thriller-cum-detective story rivaling John Dickson Carr's Captain Cut-Throat (1955), in which an apparently invisible assailant roams one of Napoleon's military camps and stabs his sentries under seemingly impossible circumstances. It remains one of my favorite historical detective stories.
But I have to be fair here and not be tempted into decrying this book merely because it's not what I wanted it to be. The plot is still a good example of craftsmanship and populated with interestingly drawn characters, especially the general's daughter who's accused of poisoning her lover and the militaristic heroes who give credence to the old adage "how the mighty have fallen," thrusted into dangerous and exciting situations. My favorite scenes are the prologue, in which the enemy's camp is being infiltrated and when they return thirty years later, alongside Amerotke, to investigate the makeshift tomb of Meretseger – only to discover it empty and trapped in a ambush. Great stuff!
In summation, this wasn't exactly what I was looking for when I picked up this book, but not once did I had to stifle a yawn and overall it's an engrossing, fast-paced read which will not fail to entertain the fans of this series. But I hope the next entry is a return to the previous books with a puzzling locked room mystery and at least one or two clues to mull over while traveling from one chapter to another.
Speaking of locked room stories, the next mystery on the list will definitely be one. I have more than enough of them in cold storage, but picking one will proof to be the real challenge.
All the books I have reviewed in this series:
The Mask of Ra (1998)
The Horus Killings (1999)
The Anubis Slayings (2000)
The Slayers of Seth (2001)
The Assassins of Isis (2004)
The Poisoner of Ptah (2007)
The Spies of Sobeck (2008)
Geplaatst door TomCat on 9/30/2011