"Keep your friends close, but your enemies even closer."
- Michael Corleone (The Godfather II, 1974)

Paul Doherty is a name that has been echoing around these parts of the blogosphere, message boards and communities for weeks before it began resonating on our reading lists as more and more mystery buffs seem to be handing in book reports on their blogs and it is easy to understand why he's a writer you can easily pick up – no matter where you stand in the genre. Doherty situates his stories in fascinating sceneries, in which he allows the past to rise up to obscure the present by carefully reconstructing the mise en scène of erstwhile civilizations, fraught with danger, intrigue, mystery and oodles of crimes – some of them perpetrated in apparently impenetrable surroundings! 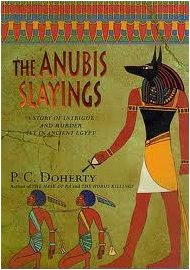 The Anubis Slayings (2000) is no exception and is a continuation of the previous novel, The Horus Killings (1999), in which Hatusu, better known to historians as Hatshepsut, ascended the throne and established herself as the first women whose head was adorned with the double crown of Egypt – while her trusted subject, Chief Judge Amerotke, brought light in an ever darkening affair enshrouding the Temple of Horus.

But before I go on with this review, I must point out here that the skeleton plot of this book bears a striking resemblance to its predecessor, however, the multitude of plot strands are pulled a lot tighter together here and this benefited the overarching story notably.

In The Anubis Slayings, Hatusu and the vanquished King Tushratta of Mitanni are negotiating at the Temple of Anubis on a treaty to ensure a peaceful existence between the once warring nations, but King Tushratta is embittered at having tasted defeat at the hands of a woman he now has to bow his knees to – and in his heart he vows to avenge his wounded echo. Hatusu isn't taken in with the Mitanni monarch, either, and slowly, but surely, it becomes apparent that one of the participating parties is sabotaging the tentative truce – as the temple becomes the scene of a baffling crime that suggests the hand of a supernatural being. The patron saint of embalmers, Anubis, is even seen walking the earthly soil of the temple!

One of the temple chapels closely resembles an inviolable bastion, safeguarding a holy amethyst known as The Glory of Anubis, but someone managed to sneak pass the guards unseen, phase through a solid door, locked from the inside, without disturbing the pool dug in front of the door and plunge a dagger into the priest murmuring prayers in front of a statue of Anubis before dissolving into thin air with the amethyst – and when the door is broken down they find the only key of the door still dangling from the dead man's girdle. As with the previous book, the deception of the sealed room illusion here was also cleverly hinged on a presumption, but ultimately not a very spectacular or mind-blowing explanation. Although I definitely liked this locked chapel problem a lot more than the murder in the closed-off garden tower from the previous case.

But the theft and slaying of a priest at the temple aren't the only hurdles Judge Amoretke has to clear in order to preserve the environment needed to work out a deal with the Mitanni. In his capacity as Chief Judge he's also obliged to look into a myriad of varying problems, which range from a lost manuscript by a renowned traveler whose savaged remains were fished from the river Nile to a Mitanni warlord found with barely a mark on his body in a chamber with the door and shutters locked or latched from the inside, but in this story all the plot threads are connected to one single intricate scheme – which turned out to be a huge improvement in comparison with its forerunner.

Nonetheless, there were too many of these plot threads running through the story to utilize them all to their full potential and some of them receded into the background almost immediately after they were introduced and only brought up again towards the end as an afterthought, but that's a minor complaint, really, measured against the overall quality of the story – in which Doherty expertly reconstructed an ancient civilization and wrapped it up with enough threads from which he could've easily spun three more novels. So why do I even bring up two strands that were lost sight of when a thick blanket, embroiled with pleasing patterns, was being woven? I mean, this is the kind of plot I always hope to find in a post-GAD story.

In summary, this is a book that is gratifying in its offering of a twisted, maze-like plot populated with interestingly drawn characters and is basically a breed of grand detective story that was thought to be extinct – and even though Doherty's sparse clueing betrays a modern heritage it takes very little, if any, away from the book.