The Spoils of Conquest

Yesterday, I marched into a vast, open event hall that was this months stronghold for the Boekenfestijn (book fest), where mainly leftover or returned books are disposed of directly to the consumer at bargain prices, and armed with an inventory I charged the rows of tables – and was able the claim the following tomes as war booty: 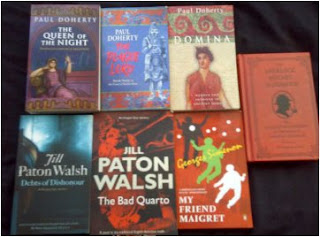 Paul Doherty's Domina (2002), The Plague Lord (2002) and The Queen of the Night (2006)
Admittedly, Paul Doherty's historical romances were the primary objective of this year's crusade to the book fest, but the result was rather disappointing – as none of the books I swooped up were listed on the scrap of paper I was carrying on me. Unsurprisingly, I was questing for his impossible crime stories, especially the ones set in ancient Egypt, but was unable to turn up even one of them. Nevertheless, the synopsis of The Plague Lord entails a lot of promise.
Jill Paton Walsh's Debts of Dishonor (2006) and The Bad Quarto (2007)
Walsh garnered fame within the GAD community when she completed Dorothy Sayers' uncompleted manuscript, Thrones, Dominations (1998), in which she perfectly captured the essence of the erudite Crime Queen – and showed that a pastiche can be good depending on who's wielding the pen. She also authored a series of her own, in which a college nurse, Imogen Quy, unravels classically conceived plots of the murkiest kinds in a scholastic setting. I picked up the last two entries in that series.
Georges Simenon's My Friend, Maigret (1949)
According to the gold standard utilized on this blog (roughly 1920-1950), this is the only novel published during that prosperous, golden era that I was able to obtain on this journey. Not that I had any hopes of excavating a copy from the catalogues of the Rue Morgue Press or Crippen & Landru, but you can't stop that flicker of hope igniting itself when you pick-up a war chariot (i.e. trolley) at the entrance and catch that glimpse of the first pile of books. In any case, the description on the book cover promises an interesting story.
The Sherlock Holmes Handbook: The Method and Mysteries of the World's Greatest Detectives (2009)
A readers companion to the investigative methodology of the world's most famous consulting detective, Sherlock Holmes. It's apparently also chock-full of Holmesian trivia and whatnot. This book could turn out to be fun as well as a disaster (or a combination of both), but at these prices it would almost be criminal not to take a gamble.
Well, there you have it, booty of war, which I will continue fondling in public as I knock them off my to-be-read list and review them for this blog in the months ahead of us. Speaking of reviews, there will be one up tomorrow.
Geplaatst door TomCat on 9/02/2011