Bugs Bunny: "Just between the two of us, what season is it, really?"
Daffy Duck: "Ha, ha, ha! Don't be so naive, buster. Why, everybody knows it's really duck hunting season."

Back in December, I picked up a copy of Baynard Kendrick's The Whistling Hangman (1937), which spurred an altogether too short, but nonetheless riveting, reading binge – during which I covered several tomes from the Captain Duncan Maclain and Miles Standish Rice series. A review of The Last Express (1937) even made it to this blog. 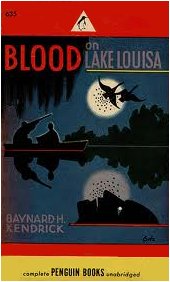 Though every bit as readable, Blood on Lake Louisa (1934) is an early effort that sets itself apart from the crime riddled chronicles of Maclain and Rice. In the first place, it's a standalone novel situated in a small town, Orange Crest, and has a distinct regional flavor – and the case is reported to the reader from a first-person point of view. The always clued-up Mike Grost also noted on his website that the plot was structured on the basic principles of an Had-I-But-Known story, which is strange for a masculine book set against the background of outdoors sportsmen and moon shiners with an almost entirely male cast – making this book somewhat of a curiosity.
The person narrating the story is a small town physician, simply known to his family and friends as Doc Ryan, who reflects back at "the events that threw the whole of our little community into an uproar," which was set in motion when one evening he took a boat out to the lake to fish under the pale and sorrowful visage of the moon and take pot shots at the snoozing ducks between the reeds – but when he wants to retrieve a wounded bird he finds the corpse of a friend tingeing the dark blue waters with a splash of crimson red.
On the surface, the untimely demise of David Mitchell, a local banker, has all the earmarks of an unfortunate hunting accident, but a primarily investigation shows that the ammunition in the medico's rifle was of a different brand than the discharge that ended up killing Mitchell – making this a clear case of murder as he was already dead when the doctor emptied a cartridge at the feathered shooting targets.
Blood on Lake Louisa is very competent in keeping your eyes and mind from straying off the printed pages, from throwing a pocket watch hidden in a coffee pot at you to a confrontation with a dying man who utters a cryptic warning message, while moon shining and counterfeiting hover inconspicuously in the background – but the most engrossing parts were the lines that reflected the time and era. The first copies rolled off the press in 1934, but it was probably written at the tail end of the Prohibition Era. It's drenched with bootlegging references and several characters have bottles of hard liquor stored away, including the doctor and the sheriff, and shows how that particular decade in history taught Americans how to be unlawful – especially on a domestic level.
Less endearing was the stereotypical portrayal of minorities. I'm the farthest removed from a political correct, censor happy prick but even I cringed at some of the scenes in this book. Laughing at comedians who make edgy jokes is something completely different as being confronted with the uncouth, racial attitude of the 1930s and the reason why we'll never see another Baynard Kendrick print run until he drops into the public domain – which is a shame, really, in spite of this embarrassing character flaw.
All in all, this is a fairly well written and adequately plotted detective story, which keeps the reader occupied by littering the place with mystifying clues and stuffing shadowy nooks with mortal dangers, and while the solution doesn't come off as the mind-blowing surprise it was intended to be – it was still a nice first try and I appreciate it. However, I recommend you start off with The Whistling Hangman before examining Baynard Kendrick's other detective stories.
Once again, I have to end on an unrelated note. But today I received a package stuffed with impossible crime novels. So you know what to expect in the upcoming weeks here.
Geplaatst door TomCat on 9/24/2011