An Obituary for a Poet

"Nothing is simpler than to kill a man; the difficulties arise in attempting to avoid the consequences."
- Nero Wolfe (Too Many Cooks, 1938)

One of the drawbacks of roaming the remnants of a genre whose memories have become a fading echo in the recollection of the populace, is that's it difficult to keep your aim focus on one specific name or phase for an extended period of time. The map of the genre, for me, is still dotted with stretches of terra incognita, just waiting to be rediscovered and explored, which makes loitering almost a criminal offense – and a convenient excuse to explain away why it took me nearly a year to get back at Jack Iams after a favorable first impression. 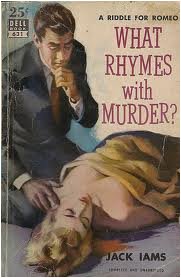 Just about a year ago, I pored over one of his standalone novels, The Body Missed the Boat (1947), which was a very quick, but nonetheless amusing, read and left me wanting to sample more work from this little known author – so I ordered Death Draws the Line (1949) and What Rhymes with Murder? (1950). But it took me until this week to finally pick one of them up. The book I selected and finished reading yesterday was the enigmatically titled What Rhymes with Murder?
As a detective story, it was interesting enough but not entirely satisfactory as the plot was very uneven in quality. But before examining the pros and cons, I have to drop a line or two here on how similar everything felt to one of William DeAndrea's Matt Cobb stories. It wasn't as good, of course, but the tone was very much the same – just like the voice that guided the readers through the events as they went down. The narrator, Stanley "Rocky" Rockwell, even holds a somewhat similar position as Matt Cobb as the fighting editor of one the cities biggest newspapers, The Record, and the problems he has to tackle arises from this job. Just for that, devotees of William DeAndrea and Matt Cobb should hunt down a copy for their collection. But on to the story.
In the opening chapter, Rocky relates how their only competitor, the Eagle, went into suspended animation after the local dynasty, who owned the news outlet, unexpectedly tipped over, but was brought back into circulation by a chain of rag sheets with a reputation for sensationalism and yellow journalism – and the first one to receive a treatment with their acid-based ink is a British poet en route to the United States.
Ariel Banks was definitely a polarizing figure, a Bohemian versifier known as The Great Lover, but the editor of The Record hardly finds this to be sufficient justification for the Eagle to mobilize masses of self-righteous drones to protest his arrival and picket the train station – and since the poet has been invited to speak at the Tuesday Ladies' Club there's a double-edged stake in it for Rocky. First off, his long-time fiancée, Jane Hewes, is a leading member of the club and has to take care of the amative pen knight, which sits not well with him, to say the least, but at the same time he's obliged to oppose their rival competitors in what's rapidly shaping up to be a paper war.
But when Monk Sparle, the callous editor of the Eagle, and his female field operator Amy Race, give Rocky the multiple choice option to either ascend the career ladder at their outfit or be trodden under foot everything becomes far more personal than a contact ad in a lonely hearts column – especially after a dead-shot plugs the poet's ticker with a slug in front of his fiancée.
What Rhymes with Murder? has a lot going for itself, from the crisp narration of the protagonist to the astute plotting on the authors part, but the clues impressed me as a trifle weak and the coincidences just made it come up short from being front page material – but the only real erratum was the trivialization of Rocky's presence when a secondary character suddenly donned the deerstalker for the dénouement aboard a night train bound for the Capitol.
All in all, this is a very decent effort at crafting a detective story and a fascinating example of a work published at the tail end of that prosperous, golden era when the puzzle orientated stories were receding into the background to make place for the action-filled, hardboiled private eye tales that ran mainly on booze, cigarettes, gunoil and testosterone. You can find elements from both epochs tucked away between the pages of this book, making it sort of a transitional fossil of paper. So even though this is not a prime example of the classic detective story, it still has enough to offer to us fans to make it worth our time.
Now only one question remains: how long will it take me before I get around to reading Death Draws the Line? Place your bets now!
On a final, unrelated note: I hate it when one review, more or less, writes itself while others put up a real struggle when it comes to finding the right words and phrases – like was the case with this one. After the first paragraph, I started to blank out. The above is what I was able to churn out after numerous rewrites. Yeah, I blow.
Bibliography:
The Body Missed the Boat (1947)
Girl Meets Body (1947)
Prematurely Gay (1948)
Death Draws the Line (1949)
Do Not Murder Before Christmas (1949)
A Shot of Murder (1950)
What Rhymes With Murder? (1950)
Into Thin Air (1952)
A Corpse of the Old School (1955)
Geplaatst door TomCat on 9/18/2011