"When your Monday has consisted of murder, two sessions with a boss who doesn't like you, a trip to the country, the chase and capture of a fleeing man, a tough softball game, and a tête à tête with a beautiful psycho who more or less announces that at a more convenient time and place for her she intends to have your body, whatever it will do to your life, it tends to bode ill for the rest of the week."
- Matt Cobb (Killed in Fringe Time, 1995)

What can I possibly say about William DeAndrea, as a preface to this review, that I haven't already touched upon in previous blog entries dedicated to his work? Chronologically, he was a crime writer of the modern, post-GAD era, but if you carefully peruse his books and short stories, it won't be too hard to notice the iron-clad links that connect the far past with the here and now – and hopefully the distant future as well. The hardboiled tone of story telling, resonating with the voices of Archie Goodwin and Philip Marlowe, partnered with an orthodox sense of plotting set against the décor of a television network, not only picked up the threads of tradition but also weaves new patterns. 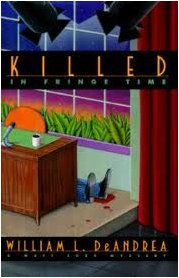 In the opening of Killed in Fringe Time (1995), Matt Cobb, the Vice-President in charge of Special Projects, who's responsible for handling everything that's too insecure for security and too private for Public Relations, is lulled into running an errand for Richard Bentyne – who recently signed a multi-million dollar contract to battle on The Network's behalf in the trenches of the late-night war against Jay Leno and David Letterman. The prime-time prima donna managed to snare "The Mountain Man," an eccentric billionaire hermit, for his show and wants the troubleshooter to pick him up from the airport – even though it's not part of his job description he indulges their newest acquisition for the sake of the station. But allowing a well-off solitudinarian, who estranged himself from society, to hitch a ride from him to the studio will proof to be the least of his worries.
As you've probably noticed by now, Richard Bentyne is the proverbial victim whose elephantine ego leaves absolutely no room for friends and compensated this with an impressive collection of enemies, but this, strangely enough, didn't turn him into a stock character or plot device. Before stuffing him into body bag, DeAndrea humanizes his character with a personal revelation that came up in a conversation between Bentyne and Cobb – making the murder somewhat less impersonal. Sure, he's as insufferable and asinine as they come, but hardly a Mr. Ratchett or Mary Gregor whose murderers could be cheered on without the risk of spraining your conscience.
Unfortunately, for the new face of late-night television, the murderer wasn't privy when he lay bare the faint traces of a genuine human being in his personality and before tapping the show his acid laced tongue tastes the numbing effect of fatal dose of poison. But what's really cruel is that the murderer doctored his specially prepared dish of chicken wings peppered with snippets of garlic. I personally could live with chomping down an alarming quantity of arsenic, but to have the taste of fried chicken lingering in your mouth before you depart from this world seems to me a faith worse than death.
It's up to Matt Cobb, leading force behind Special Projects, to keep the damage to The Network to a minim, which simply means sniffing out the murderer himself and handing this person over to the police. However, that's easier said than done when your lists of suspects consists of, among other, a delusional old woman, who believes the talk-show host was her long lost son, a producer who's also a live-in ex-girlfriend and a psychotic associate producer who could've crept from the pages of a second-rate, cliché riddled private eye story, nor does it help to be oblivious to the clues that are practically dangled in front of your eyes – which was also the case with this reader.
In my defense, some of the clues required a particular knowledge to perceive them as such, but there's not a legit excuse, other than brain leakage, for missing the main clue, which, retrospectively, was a dead giveaway – and I feel embarrassed for having missed it. So, well played, Mr. DeAndrea. Well played. But I'll get your next time Gadget! I will spot your cutesy, but oh so cleverly hidden, clues and unsnarl your tangled plot before that troubleshooter of yours does – and that's a promise! Well, look at that, it's nearly time for my medication. That means the moment has come to wrap things up here.
Killed in Fringe Time is a prime-time showcase of the talents scribbled down in the opening paragraph, in which DeAndrea summons the phantasms of a bygone era that seamlessly blends into a contemporary setting. The result is a story that manages to feel both retro and fresh at the same time. It's also a perfectly fair detective story with enough twists, turns and dangerous situations to satisfy a wide arrange of fans within the genre.
It also whetted my appetite for Killed in the Act (1981), but I have to put off that one for just a few more weeks – while I reduce the pile of impossible crime stories by Paul Doherty and Herbert Resnicow. It's a job fraught with temptations, peril and sacrifice, but somebody has to do it!
The Matt Cobb series:
Killed in the Ratings (1978)
Killed in the Act (1981)
Killed with a Passion (1983)
Killed on the Ice (1984)
Killed in Paradise (1988)
Killed on the Rocks (1990)
Killed in Fringe Time (1995)
Killed in the Fog (1996)
Murder – All Kinds (2003)
Geplaatst door TomCat on 9/28/2011