Too Hot for Comfort

"You're going about this wrong, Ed; trying to fit a normal motive to an abnormal situation in a straightforward way. Have you tried Warren's way of backward thinking?”
- Iris Guralnick (The Hot Place, 1991)

When I read the first chapter of The Hot Place (1991), I fully expected that at the end of the book another opportunity was waiting for me to force a link in the chain of laudatory reviews praising the neglected and undervalued Herbert Resnicow, but his sixteenth detective novel turned out to be a surprisingly routine affair – lacking the effulgence of its predecessor, The Dead Room (1987). 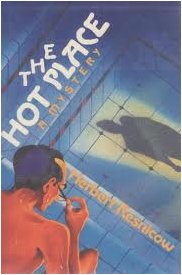 The Hot Place starts off strong when entrepreneur Ed Bear strides into the main entry lounge of the sumptuous Oakdale Country Club, to which he and his son pay a Prince's ransom in membership fees, only to find it occupied with policemen – and a few of them are scowling down at his son, Warren, while scribbling in a notebook. Only a few hours before, Warren had entered the steam room, around eight in the morning, after an early workout and stumbled over the remains of Barney Brodsky.
Brodsky was a miserable old curmudgeon, who could only derive solace from needling and aggravating everyone unlucky enough to wander into his peripheral vision, but this hardly seems like an adequate motive for a murderer to plead a case of justifiable homicide to his or her conscience – and so everyone assumes the old geezer was merely overcome by the heat and density of the vapors that cloud up the steam room. But Warren believes it was murder and when a medical examiner takes a look at the body the diagnosis is death by asphyxiating. Murder, plain and simple!
The murder of Barney Brodsky appears to be closely entwined with the dealings of his business associates, who also form a closely-knit network within the club, and a big investment deal – which is interlocked with one of the Bear's latest commercial endeavors. As a result, father and son find themselves taking on the roles of Ellery and Richard Queen as they probe through the fog enshrouding this case, however, this time they have less than a week to clear everything up and safe an enterprising young man from ruination.
You'd think that after such a set-up that the plot had build-up more than enough steam required to effortlessly charge through the chapters towards the final dénouement, but after the opening the book becomes sedentary and takes it time to position all the pieces on the playing board before resuming again. As a result, intricate and ingenious plotting was sacrificed in favor of characterization – and it shows when compared to Resnicow's previous efforts. The clues are there, but they border dangerously close on the green tie variety, especially the central hint, and the solution mainly hinges on the movement of the murderer at the time of the deed. It's not an entirely uninspired solution, but it would've been better suited for the pages of a short story.
I was also somewhat disappointed that the crime-scene barely had any significant role in the execution of the murder. The exploitation of the architectural features and functions of a crime-scene was his specialty and I structured a fairly clever, but false solution, around that expectation.
Brodsky always used the steam room from eight to nine and was usually its only occupant, since nobody could take it when he turned the thermostat all the way, and I reasoned that the murderer used the combination of this habitual visit to the steam room and high temperature to craft a convincing alibi for the police. Everyone expected him to be in that room between eight and nine and when his body was found it would be assumed that he was killed within that hour, but what if he was murdered before that time? Lets say 15-20 minutes before eight. Body dumped in the hot room, making it impossible to determine the actual time of death, while the murderer makes sure he can account for every minute during eight and nine. Yes, I know, I should write detective stories myself.
On the other hand, the father-and-son team of Ed and Warren Bear do make up for some of the shortcomings found in the plot. They're not only excellent as a pair of enterprising amateur sleuths, but they also come across as a genuinely warm, but imperfect, family – as Ed is still grappling with the lost of his wife and worrying that he still hasn't any grandchildren, while Warren is wrestling with insecurity issues. But this never casts a grim shadow over their personalities and it's handles very realistically, IMHO, because in spite having lost their wife and mother, they find themselves trusted back into their normal, everyday life – which is what usually happens in real life. All of a sudden, you find yourself back in your old life again and that you can still laugh or worry about things that seemed trivial only a few weeks ago.
So while The Hot Place is not Herbert Resnicow's magnum opus, it's still a very readable yarn with two enduring characters at its helm and I thought it was interesting to see him handle a closed circle of suspects situation for a change – although I hope to encounter another intricately plotted locked room problem in the next novel. I still recommend it if you're looking for a fun little mystery, but don't expect a masterpiece from it.
On a final note, towards the end of the book there's a reference to Ellery Queen, Nero Wolfe and Alexander Gold, but does this mean that Alexander and Norma Gold are fictional characters in the Ed and Warren Bear universe? Or do they share that space with Ellery Queen, Nero Wolfe and Archie Goodwin?
The Alexander and Norma Gold series:
The Gold Solution (1983)
The Gold Deadline (1984)
The Gold Frame (1986)
The Gold Curse (1986)
The Gold Gamble (1989)
The Ed and Warren Bear series:
The Dead Room (1987)
The Hot Place (1990)
Geplaatst door TomCat on 10/17/2011