"It's a pity," he said, "the walls can't talk. They could tell us a tale of a bold and intricate woman. A clever woman too—a woman who had figured the last evening of her life to the minute and second, a woman who thought she had covered everything."
- Inspector Chant (The Strawstack Murders, 1939).

After an extended excursion to explore the unfathomed nebulas of classically styled, post-1950s detective stories, I decided to take a well-deserved break from that period and head back home – to the Golden Age of Detective Fiction. 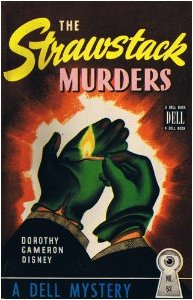 Dorothy Cameron Disney's The Strawstack Murders (1939) showed itself to be an exemplary specimen of that prosperous, illuminating era – in which a rich and complex plot is expertly constructed around a fair distribution of clues and red herrings. And if I were still unenlightened about the contributions made by contemporary, neo-orthodox mystery writers, such as William DeAndrea, Marco Books and Herbert Resnicow, I would've been tempted to lament the fact that detective stories like these followed in the pawprints of the dinosaurs.
The moving spirit of this novel is a spinster, Margaret Tilbury, who lives with an assortment of relatives at a Maryland estate, known as Broad Acres, and lends her voice to the narrative of this bloody tale of murder and intrigue. The events Miss Tilbury depicts in the opening chapters, from an intensive bout with typhoid fever and the arrival of her nephew to in-law relationships and the entry of an unpopular nurse in the household, have the appearance of unimportant, domiciliary episodes and problems. But in true "Had-I-But-Known" fashion, these purely domestic events form in reality a cleverly disguised prelude to murder!
Dorothy Fithian, an unlikable live-in nurse who temporarily took up residence at Broad Acres to look after Miss Tilbury when she was struggling with the specter of death, becomes the first stiff to be carted-off to the city morgue when, one fateful evening, the household notices a glow emanating from the fields behind the house. When they go out to investigate, they discover the straw stack burning like a friar's lantern and during their attempts at dowsing the fire they drag Dorothy Fithian's limp body from underneath the smoldering stacks – where her nightly assailant left her to die an agonizing death after chocking her into semi-unconsciousness.
But when they return to the house, they find that someone has cut the telephone wires and drained the gasoline from their cars – effectively delaying the proper authorities from taking charge of the crime-scene and gaining valuable time for other nefarious activities. This makes it very clear to the members and friends of Miss Tilbury's family that they have a murderer among them and do everything within their power to sabotage the official investigation, from simply withholding information to burning possible evidence, much to the chagrin of Inspector Chant.
Back in April, Disney favorably impressed me with her debut novel, Death in the Backseat (1937), which I delineated as a big knotted ball of plot threads that slowly unravels in front of a captivated reader, but during her second outing into the genre she crafted a novel that is nothing less than a minor masterpiece of plotting and misdirection. The plot simply bursts with activity, as characters are constantly moving around and bumping into more trouble as they go along, while clues are inconspicuously dropped along the way – which results in new developments in every odd chapter that ramifies the problems facing them and the reader.
But the greatest achievement here is perhaps the clever and original treatment of a stock-in-trade situation of the detective story that is cleverly hidden at the core of this book. I can't go into exact details, without giving away a vital part of the solution, but it makes you want to stand up and applaud the author for this ingenious display of creativity!
I've become a bit fearful at this point that I might have over praised this story, but I find the flaws, IMHO, negligible. Yes, the HIBK allusions can be annoying or even intrusive at times and most of the characters function more as chess pieces on a playing board than as actual human beings, but these are trifles compared to the quality, ingenuity and originality of the overarching story.
Dorothy Cameron Disney has completely faded away from popular view, which can be partly attributed to the fact that her mysteries are standalones, but that's hardly a justification for this criminal negligence on the part of the reading public. A good detective story is a good detective story, even if it lacks a catalyst such as Hercule Poirot or Dr. Gideon Fell, and The Strawstack Murders is an exempli gratia of the Golden Age Detective novel – in which Disney spun fine meshes from the multitude of plot threads and ensnared both characters and reader in it.
Simply put, The Strawstack Murders provides you exactly with the type of plot that you hope to find when opening a detective story from the 1930-and 40s. A (minor) masterpiece, plain and simple!
Bibliography:
Death in the Backseat (1937)
The Strawstack Murders (1939)
The Golden Swan Murders (1939)
The Balcony (1940)
Thirty Days Hath September (1942)
Crimson Friday (1943)
The Seventeenth Letter (1945)
Explosion (1948)
The Hangman's Tree (1949)
Geplaatst door TomCat on 10/26/2011