Everybody Loves a Good Mystery!

"You know I speak from experience 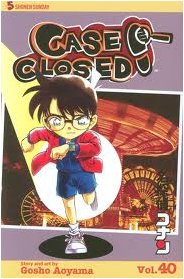 Before I began working on this post, I excavated the previous Case Closed / Detective Conan reviews from the archives and came to the dispiriting conclusion that this will only be the third volume, thus far, discussed on this blog – which threw me back to that wonderful period when every year six new volumes were released. Sadly, that was reduced from one new release every two months back to three months after the series was re-branded as a Shonen Sunday manga.
I still have absolutely no idea what that exactly entails, but suffice to say I don't like it one bit and prefer the old schedule. Yeah, I know, the old schedule wasn't as profitable as the new one, but I like to believe that making me happy should be a bigger concern to Viz than something as banal as paying their employers or providing for their families.


The Drug Known As Love
The fortieth volume opens with a Metropolitan Police Love Story, in which Sato and Takagi are laboring under the naïve assumption they have arranged a surreptitious date for two at Tropical Marine Land, a popular amusement park, but their colleagues have them under close surveillance and under the guiding hand of Santos make a serious attempt at wrecking their little tryst – which is easy enough with a drug runner on the loose and Conan unexpectedly turning up with his buddies. As you probably deduced from this brief synopsis, we're dealing here with a lighthearted, risible caper fraught with incredible coincidences, such as Takagi's bag pack accidentally being swapped with the one from the drug mule or when all of the suspects turned out to be athletes, making this somewhat of a madcap chase story. Simply amusing from start to finish.
Justice vs. Crime: 15-Love
Conan is feeling a bit under the weather, but nonetheless insisted on accompanying Rachel to Serena's summerhouse, where they want to spend a weekend on the tennis courts, but an unheralded cloudburst soaks their plans – and the party eventually ends up at a desolated house in the woods occupied by a young tennis instructor and his old father. Needless to say, this inauspicious day ends appropriately when Conan and Rachel discover the body of the old man in his room, suspended from the ceiling with a stout rope coiled around his neck, and everything indicated that took his own life. But our little gumshoe finds himself to be only person who really listens to the story that the silent witnesses are trying to tell the investigators. This story is basically a successful cross between an inverted detective story and a how-dun-it. We know who killed the old codger, but not how it was done, however, there are plenty of clues to work out the method and destroy the murderers craftily build-up alibi. A very satisfying story.
Lost Love
In this story, Doc Agasa takes a central role as Conan and The Junior Detective League offer a helping hand with cracking a code. This numerical cipher was left to Doc Agasa by a girl he was very fond of and refers to a special location where she'll be waiting for him once every 10 years, but the poor professor never managed to break it. Is Conan up to the task to pick the lock to the heart of the Doc's long-lost first love and will she still be waiting for him after all these years? A sweet and touching story, but you have to be a super genius to solve this conundrum (Aoyama admitted this in his after word).
Anyway, it's interesting to notice how Aoyama insists on connecting nearly every (recurring) character in his universe with one another – no matter how superficies that connection turns out to be.
The final chapter is a set-up of a new story, in which the Great Sleeping Moore bungles up a case and runs up a huge tap and both Rachel and Conan's mothers put in an appearance. But more on that in the review of volume 41, which will be released in early January of 2012. Can't wait!
Geplaatst door TomCat on 10/22/2011