"Magic is an art form where you lie and tell people you are lying."
- Teller (from Penn & Teller)

"A man vanishes at the top of the Indian rope trick and is found dead miles away" and "a dead man continues to receive mail in response to letters apparently written by him after he'd died" are two of the stories teased on the back cover of The Mammoth Book of Perfect Crimes and Impossible Mysteries (2006) – edited by anthologist Mike Ashley. 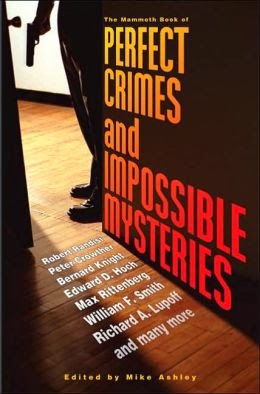 Six years previously, Ashley compiled The Mammoth Book of Locked Room Mysteries and Impossible Crimes (2000) and both collections are distinguished from past anthologies by the balance between rarely reprinted locked room stories and brand new content. Of course, there's a flipside to every success story. The quality of the content is prone to fluctuation and can go from radiating brilliance, and crackling with novel ideas, to absolute schlock pumped from the sewers of some shoddy, forgotten pulp archive or private collection. Ashley's second collection of impossible crimes has the dubious honor of containing one of my favorite and most hated locked room mystery stories of all time. Lets begin with the latter.

John Basye Price's "Death and the Rope Trick" was buried in a 1954 issue of the London Mystery Magazine and hadn't been reprinted before, which can have a legitimate reason behind it – quality wise. Even after re-reading the story, I still feel Ashley should've been in the docks for desecrating a gravesite. He actually called it (and I quote), "a particularly cunning example." Oh, the story starts out promising enough, alright, but the solution does more than merely strain the readers credulity... it then strangles reality with it. It's as if Price took the premise of a rejected Wile E. Coyote and the Roadrunner cartoon and used it as a template for a detective story.

The legendary Indian Rope Trick is at the heart of the story and begins when the narrator, Jimmy, accompanies his uncle, Mr. Edward Dobbs, Chairman of Western University's Board of Trustees, to Central America to witness the famous trick in person. A certain Mr. Weldon, a student of the paranormal, has left the university two million dollars under condition a fund of half a million dollars. The money is a reward for the person who can perform the magic rope trick under scientific test conditions and there by demonstrate the genuineness of psychic phenomena, because even Harry Houdini never attempted it. That's the logic behind the challenge. I guess. But the presentation of the trick isn't even consistent with the terms of the will or the fund.

Dr. Clive Marlin is a self-styled student of the occult and has claimed the $500,000 reward, but hams up his performance at a steady pace from the start with not a word of protest from the trustee or his nephew. The poring of the concrete and signing their names in it is an interesting hindrance to eliminate one possible way of cheating (until you read the explanation), but there are also curtains placed around the plateau. Guess who aren't allowed in for the first part of the performance? It's an out and out magic show with suspicious movement in and out of the curtained enclosure, which leads up to an incredibly convoluted and ridiculous dénouement – going contrary to statements made by Jim and his own photographic evidence. I refuse to believe they were fooled by what they saw or that the truth wouldn't have come to light after the photographs were developed.

But, first, Dobbs and Jimmy witness the rope snaking up from the curtain and rising into the air and a young, skinny boy, named Ali, climbs up the rope, while the curtains below burst into flames and only a tight budget (he hadn't quite earned that check yet) prevented a full fire work display. You have to admire the integrity of the trustees to not allow the Scientific Method to intrude on the privacy of the Man Behind the Curtain. Anyhow, Marlin proceeds to whip out a pistol and shoot the boy, but the only thing dropping from the sky is the white loincloth Ali was wearing. He appears to have burst like a soap bubble. Statements and (photographic) evidence makes you reject the obvious answer. Not that it would've helped you solve the crackpot method of the Rope Trick or how the body of Ali was found miles away from the performance area. However, I think Marlin still qualifies for the half million dollars for showcasing a supernatural ability in how every inane step of the performance worked like a well-rehearsed dance routine. Looking back, it's like a minimalist and slightly surrealistic circus act performed for a very, very small audience. I didn't like the story, is what I'm trying to say. 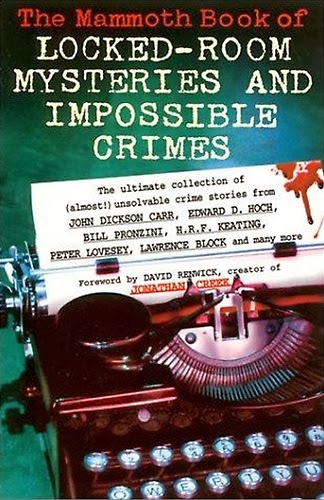 Nevertheless, the editor was able to redeem himself with the inclusion of H. Edward Hunsburger's "Eternally Yours," culled from the pages of 1985 edition of Alfred Hitchcock's Mystery Magazine, which I think is close to perfection in terms of a short detective story – and re-reading has only cemented my first impression of the story. Remembering the solution, I was surprised how liberal Hunsburger was in sowing clues and dangling the truth in front of the reader. It should be required reading for aspiring mystery writers in how to clue a detective story.

Jeff Winsor is hardcover artist for mystery novels and narrator of "Eternally Yours," who doesn't believe in ghosts nearly as much as he believes in the scarcity of good apartments in New York City, but his new abode in Gramercy Park is beginning to look haunted. The previous tenant, Admiral Miles Perry, died behind the locked doors of the apartment after slipping on a rug, but is keeping up a chess-by-mail correspondence with a friend – signed "fraternally yours, Charles." It gets unnerving when the postcards begin to contain references to events after Penny passed away. Two impossibilities for the price of one!

Karen Hunter, the lady in Winsor's life, is convinced there's a murderer somewhere, because "people are always getting murdered behind locked doors in mysteries," and Penny's ghost wants Jeff to find his killer. Recognizing an inescapable quest for the truth, Winsor begins to question the doorman, Tom Banks. Lew Drayton, the local postman and considered for mail carrier of the year. Tana Devin, the star of the soap opera Maneuvers from 3B and Mr. Campbell from 3A with more than enough reasons to celebrate the untimely demise of the Admiral. Hints and clues are littered in these conservations, and there's even a false solution which caused me some embarrassment. I assumed I had hit upon a somewhat original premise and solution for a locked room mystery, but my subconscious seems to have borrowed from this rejected explanation. I still gave it a good twist, though.

However, I have to admit Hunsburger's explanation also retraced the steps of a well-known short story and an obscure locked room novel, which I can't mention without spoiling the solution of this story, but the spin he gave on it was really good and invigorated one plot-device that should've been dead and buried in the 1980s. It's evident Hunsburger knew his way around the classics and "Eternally Yours" just gels perfectly as a Who, How-and Whydunit. And fair-play, too! This story should be dragged from obscurity to be hailed as a classic. And if you disagree, you're a heretic. Or Symon's harlot. Or both. But that's OK. We don't judge in this Mausoleum of Enlightenment.

Finally, the inspiration for re-reading these stories came from Paul Halter's La tête du tigre (The Tiger's Head, 1991), which has a character reminiscing on witnessing the Indian Rope trick in person. By the way, if anyone is curious how the original Indian Rope Trick was pulled off... well... it's a bit disappointing. Back in the oldie days, before mass-communication, there were people who amused themselves by telling tall tales and one of them was a completely fabricated story of seeing an amazing performance of the trick by a mysterious fakir or priest. Usually in an obscure market place in a mountain village or countryside. I think the only proper, workable way to pull of the trick is on a disguised, elevated platform with a thick, hollow rope and a pole that can be stuck through it when it's stuffed in the prepped basket.
Geplaatst door TomCat on 1/19/2014