I Want to Play a Game

"Dear reader, you now have all the clues you need."
- Ellery Queen (a challenge to the reader)

How Good a Detective Are You? (1934) is a compilation of one-page detective stories, numbering sixty in total, challenging the reader to figure out how Professor Fordney logically reached his conclusions and were gathered in a slim volume by H.A. Ripley – described in the introduction as "that genial compounder of criminal prescriptions." The solution to each story is printed, upside down, on the backside of the page. 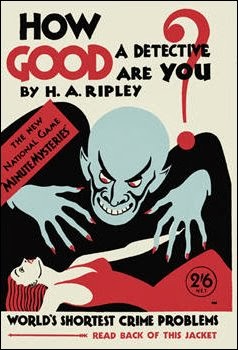 H.A. Ripley is presented as "a police enforcing officer of the most crime ridden city in America" and collaborated with Professor Fordney across the globe on headline making cases and condensed the most interesting ones in "the world’s shortest detective problems." In reality, Austin Ripley was a mystery writer with a national syndicated newspaper column, Minute Mysteries, in which readers were challenged to Solve-It-Yourself and founded the Guest House.

Professor Fordney, I suspect, is completely fictional, but Fordney and Ripley still agree on one thing, "crime is simple!"

However, not every singe one of these Quick Draw mysteries deal with criminals and a handful of stories, simply titled "Class Day," has Fordney chucking mathematical riddles at his criminology students. These stories stand close to Ellery Queen's Puzzle Club from Queen's Experiments in Detection (1968) and The Tragedy of Errors (1999), but they weren't my favorites and one of them cheated, because there wasn't an answer for the question posed.

There were also non-criminal problems taking place outside of the classroom and one of my favorites is "A Fisherman’s Tale," in which the reader has to catch the professor in a lie about having had breakfast with President Franklin D. Roosevelt and observe him signing his first official document. "An Old Spanish Custom" was undoubtedly the best and cleverest of the lot and tells of double-cross in the throne room of the Spanish Monarch, who gave a commoner a change at winning the hand of the royal princess – in a completely rigged game! If there's one entry from this collection worthy of being saved and anthologized, it's "An Old Spanish Custom" on account of being an excellent example of the quick-witted underdog overcoming a seemingly insurmountable odd thrown in his way by a powerful adversary. I would file this short-short story away as an unwitting ancestor of Bertus Aafjes' Judge Ooka stories.

The remainder of the puzzles deal with a variety of crimes, from clumsily disguised "suicides" and mob hits to thefts and embezzlement, but solving the matter can be as simple, or frustrating, as spotting a discrepancy in someone's statement or a flaw in the set-up of the crime – which can hinge on very obscure, minute details or (outdated) trivia about cheap clocks. You're not always asked the Who, How-and Why question, but how Fordney it was murder or saw through a lie. Plot-wise, these stories can be compared to the puzzles examined by the Black Widowers from Isaac Asimov's work, but with a body count as opposed to the gentler, common day mysteries the dinner club tries to solve.

Nevertheless, there were a few stories of moderate interest and they came in pairs. "The Clown Dies" and "Murder Behind the Big Top" investigate, firstly, the apparent suicide by shooting of Pipo in his circus tent and the latter the strangling/stabbing of Fofo – both better than average stories for this volume. I think the set-up of both puzzles would've made a great starting premise for a mystery novel. Something along the lines of, oh, I don't know, The Last Laugh by H.A. Ripley... (ah boo!). "Murder on Board" and "Murder During a Storm" are short, simple, but nicely done, shipboard mysteries, in which the professor notices how facts and statements given to him don’t match up. In "At the Cross Road," a taxi-driver finds his passenger with a knife sticking out of him in the backseat of his car, however, they hadn't stopped driving until they reached their destination and their was no way for anyone to enter the taxi while being driven. It's an impossible crime! Unfortunately, the solution kind-of robs it of that label and the same goes for "Fordney Climbs for a Clew," in which a man is poisoned in a locked room, but, again, it's not really a locked room mystery at all.

Finally, "Fordney Investigates a Fire" deserves a special mention for its keen and original solution for an insurance fraud by a manufacturing company, and I predict "Murder at the Cotton Mill" will probably be excluded from any possible future reprints until the full text is released into the public domain.

So, altogether, not that bad of a collection of brainteasers, but you probably shouldn't read them in one (very short) sitting like I did. Turning the book upside down to read the solution also becomes tiring after the first ten or so stories.
Geplaatst door TomCat on 1/28/2014