George Michaelmore is a well-preserved, middle aged widower of independent means with four adult children in their twenties, whom he provided for with their own apartments in the family's ancestral home christened "Sunbay." However, the Michaelmore household is in for an overhaul following a letter from their father announcing his intensions to marry a woman, named Adelaide, he met abroad and intends to bring her home in a fortnight. 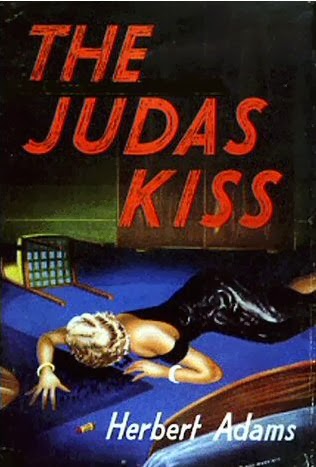 Thus begins Herbert Adams' The Judas Kiss (1955) and as the publication date indicates, Adams penned the story during the twilight years of the Golden Era. A transitional period in which the focus shifted from plot-and idea driven narratives to in-depth characterization and social commentary. You can find traces of these changes in the attitudes and opinions of some of the characters, but The Judas Kiss remains foremost a detective story – and one that's surprisingly domestic in nature.

The first half basically consists of two different quarters: the introduction of Adelaide into the Michaelmore family and the unraveling cumulating in murder. Adelaide talks with George's two sons and daughters. Garnet entered the church and tries to revive the local community, often with the gleam of the zealot in his eyes. Jasper is the artistic soul of the family and uses his apartment as a studio. He also flirts with his stepmother. Emerald is a wishful writer currently working on a serious novel with Victor Gore-Black, but is their relationship purely professional? Pearl is the babe of the lot and the confident of her siblings. The source from which all of their problems spring are ideas and morals that in Britain of 1955, a full decade before Roy Jenkins eased divorce laws and whatnot, could be experienced as an assault on the institution of marriage. Granted, some of the things are still considered a no-no, but there was definitely a break with the idea that a marriage begins with secret kisses in the apple orchard and ends with sharing a plot of land in the church graveyard.

Interestingly, there's another break with tradition going contrary to what's happening at Sunbay, but to be honest, in the wake of Dorothy L. Sayers and Ngiao Marsh, it's more of a continuation than a break – except that a male mystery writer does it. Adams' series-detective, now retired Major Bennion, has taken temporary possession of the house next door to enjoy a holiday with his wife Ruth and their baby. The brief intrusions on the Bennions are cozy, domestic snapshots of what I imagine people thought of as the Good Life in this period after World War II and the Cold War warming up. So, yes, detectives have a private life, but I'm still grateful John Dickson Carr spared us a homely bedroom moment between Dr. Gideon Fell and his wife in Hag's Nook (1933). That's a genuinely, disturbing mental image. I should also note here (before continuing the review) the apparent physical-and mental fitness of the characters, because they're constantly playing golf, tennis, chess or reading detective stories. 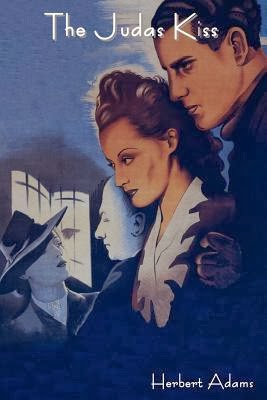 Anyhow, the nice, quiet domicile of the Michaelmores is uprooted when a car fatally strikes down George and the reading of the will lays bare hurt pride and greed within the family. It also pits Adelaide against George's children and there's a clever bit about wording of the will, but where The Judas Kiss distinguishes itself is the red herring apparently designed to fool the self-absorbed, armchair Philo Vance's who fancy themselves the stuff of geniuses – because they've read far too many detective stories than is good for them. I can't even claim I was properly fooled by deducing the wrong murderer. After a while, I was back at jabbing a finger at my first suspect (a corpse) and shouting, "you did it... I just know you did!"

How did Adams pull this off, you ask? There's a confrontation between Adelaide and the Michaelmore children, which leads the former to go into partial exile at the local inn and that's where someone manages to poison her behind the locked doors and shuttered windows of her bedroom. The police are unable to find a trace of poison in the room or how the murderer was able to administrator the poison, but Bennion solves the locked room angle almost immediately and this is the part where the seasoned mystery reader has to tread carefully. Trust me. A dead man through space-and time manipulated me by going that route. I won't go into precise details, but you've been warned.

Unfortunately, the cleverly deposited red herring was better than the actual and much more mundane solution, which was under whelming, but the worst part was that it gives ammunition to the people who say whodunits are only about restoring order. Well, The Judas Kiss did exactly that and more: all of the "rotten" branches of the Michaelmore family were cut-off and the bad intrusions rooted out. The ones who were left behind have a married life to look forward to and all was well with the world. That part felt as a definite cop-out on Adams' part. C'mon, Adams, it was 1955! We could've handled a bleak ending with one snake left in George's old love nest.

Anyhow, The Judas Kiss is a fun and quite an interesting read in spite of the weak, but cheerful, ending and loved slipping so foolishly over the red herring Adams expertly placed along the trail.

Finally, another word of warning for the reader, there's an amusing bit towards the end about a stolen plot of a detective novel and a character who reads the ending of a mystery before reading the entire story, because he wants to know as much as Sherlock Holmes does when he begins reading (fair enough). However, I fear this portion of the story could've revealed the method for the impossible poisoning from Carolyn Wells' Raspberry Jam (1919-20), which I still intend to read after positive comments from Curt Evans and Mike Grost. How do I know without having read the book myself, you ask (again). Well, if it's true, than Adams was less than subtle about it.