A Penny for Your Thoughts

I first learned of Timothy Zahn's "Red Thoughts at Morning" in a web article titled Locked Room Mysteries and Other Improbable Crimes on Steve Lewis' now torpid Mystery File Online, which preceded the (current) blog of the same name, compiling eight columns of stories not catalogued by Robert Adey in Locked Room Murders and Other Impossible Crimes (1991) – praising Zahn's hybrid concoction for its fair play and working as "a mystery as well as a better than average science fiction story." 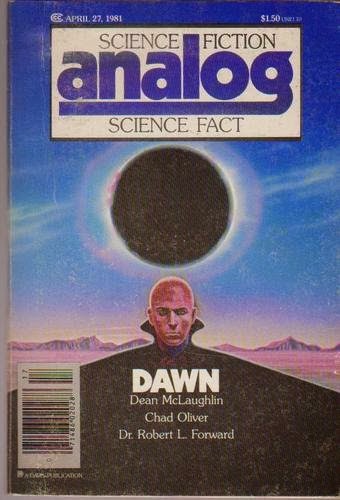 There was a straightforward reason for seeking out this particular, futuristic tale of the impossible, beside the compelling premise and promise of a fairly constructed plot. The brief synopsis and commentary put a possible solution in my head and simply wanted to see if I was correct. Hey, it wouldn’t be the first time I solved a locked room story by merely reading a description or the back cover of a book! I found there were two sources available for "Red Thoughts at Morning," the original publication in a 1981 Analog Science Fact/Fiction magazine and the collection Distant Friends and Others (1992), but a cheap copy of Analog was also easily available.

Amos Potter of Euraka, California, was a renowned telepath who'd won his small community tolerance from a world eyeing them with suspicion, because telepaths can't help in this universe reading the thoughts of people in close proximity of them. The death of Amos Potter therefore comes as a shock to telepaths such as Dale Ravenhall, who read in the newspaper the commuter plane Amos was on got hijacked and instructed to fly to Cuba. They were overrun during a stopover in Las Vegas to refuel, but the body of the telepath was discovered in the unlocked lavatory of the plane – stabbed in the chest with one of the galley's steak knives. Dale is currently a witness in a robbery case and the court is debating over whether or not his testimony as a telepath could be admitted as evidence, which shows the hassle and abuse telepaths still have to go through. In a way, the world of the Distant Friends reflects the Marvel universe (if every mutant was a telepath) and Amos even invented a telepath-finder. But it's during the next day in court that Dale asks himself the one-million dollar question: "how the hell do you unexpectedly stab a telepath?"

The rules of Zahn's Distant Friends universe on telepaths state that they can't come into close contact with each other with disastrous effects and Dale constantly communicates with his Distant Friends by telepathy, but ordinary humans are unable to shield their thoughts and intentions from a telepath – leaving open the question why Amos didn’t lock himself in. It's an impossible crime witin a reverse locked room mystery! Zahn's explanation adheres to these rules, however, it grounds the story firmly in SF/Fantasy territory and it's the complete opposite of the solution I had in mind. My solution would depend on the murdered telepath to have an assistant, because I suspected having such kind of powers would be a hassle on account of the skyjacked airplane. I envisioned the assistant (or maybe a wife) was the actual telepath, but resented the public perception and created a public avatar. The telepath receded in the background as the "assistant" and worked the public "telepath" as a puppet through telepathy, but the "assistant" panicked when they came after the "telepath" and killed him to keep everyone from finding out. Little did he know the matter would be resolved in Las Vegas. Anyhow, that's how I would've played it.

But wait, I have one more short story to review! 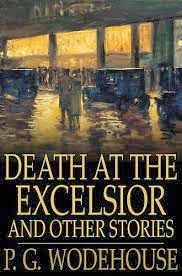 The English humorist and playwright P.G. Wodehouse, of Jeeves and Wooster fame, has a single locked room mystery to his credit, "The Education of Detective Oakes," published in Pearson's Magazine, December 1914 and as "Death at the Excelsior" in The Uncollected Wodehouse (1976) – rounded out by an abbreviated version set in the United States in the 1976 Argosy Special Commemorative Issue under the title "The Harmonica Mystery."

Mr. Paul Snyder of a reputable detective agency in New Oxford Street has a peculiar case on his desk: Captain Gunner was found dead in his room in a Southampton waterfront boarding-house of snake poison, however, the door was locked and the open, but bared, window too high to offer an escape for a snake. The search for the tricky serpent is as fruitless as the one for a tangible motive and the problem is deemed insoluble. Snyder sees the case as a perfect lesson in patience and humiliaty for Elliot Oakes, who recently joined the staff and has been far too conceited and self-absorbed with his own skills for his liking. Needless to say, I rather liked Oakes.

The plan to lower Oakes' self-esteem appears to work, at first, until Snyder receives a telegram announcing the case has been solved and the young detective delivers a solution from the Poe-Doyle School of Impossible Crimes. Unfortunately, for Oakes, a rival detective appears: the proprietress of the Excelsior-boardinghouse, Mrs. Pickett, who impressed Oakes as "having very little intelligence." Mrs. Pickett basically plays the Mr. Chitterwick to Oakes' Roger Sheringham (c.f. The Poisoned Chocolates Case, 1929) and I can imagine Wodehouse gave Anthony Berkeley an idea or two with this story. However, in defense of Oakes, it's not much of a victory if the actual solution is even more preposterous than the false one.

All in all, still a fun read and I finally know where this rather silly idea for an impossible poisoning came from.
Geplaatst door TomCat on 1/27/2014