Pellets from a Buckshot

"...you planned the most hazardous of all crimes as if you were devising a harmless parlor game."
- Nero Wolfe (Rex Stout's The League of Frightened Men, 1935)

The original plan was to have one or two more reviews up by now, but an unspecified package stubbornly persists on being delayed and, tiring of the wait, settled on crossing a handful of short stories from the ever growing list of mysteries I hope to read one day.

"Holocaust House" is a novella and a continuation of the previous review, in which I looked at Norbert Davis' debut as a mystery novelist with The Mouse in the Mountain (1943), however, I mistakenly called the book the first recorded case for Carstairs and Doan. That's not the case. The novella was published as a two-part serial for Argosy in November, 1940, which was the inaugural case for the unlikely duo. Well, sort of.

Doan and Carstairs are, essentially, the same characters from the novels. Doan is short and plumb, whose pink round face and bland blue eyes radiates with the type of innocence gullibility conmen look for in a mark – which basically means that Doan is a hardboiled, gun toting and drinking incarnation of Father Brown. However, it's the fawn-colored Great Dane, "as big as a yearling calf," Carstairs, with a pedigree of high-class ancestors as long as the arrest record of any repeat offender, who's the senior partner. "Holocaust House" is no different in this aspect and begins with Doan awaking from successfully getting drunk the night before and Carstairs, "never been able to reconcile himself to having such a low person for a master," gives him nothing but wearily resigned disgust.

The first quarter of the story consists of Doan trying to figure out who slipped him a bulky, stainless steel cigar case with deadly content (not one of the perils mentioned in the anti smoking ads, by the way) and finding a man "whose name isn't Smith and who doesn't wear dark glasses and doesn't have black eyebrows or a black mustache," before their employer of the Severn Agency, J.S. Toggery, gives him a case that separates him from Carstairs. Doan has to safeguard a gunpowder and munitions heiress, by the name of Sheila Alden, in the mountains of the Desolation Lake country – where the first snow of the winter season has begun to fall. Carstairs does not approve of mountains and stays with Toggery. And you thought Scrappy had attitude problems.

Here where's the novella begins to differ from the novels, not only because the separation breaks the fun dynamic between the protagonists, but what we get in place functioned surprisingly well as a morbidly funny take on the closed-circle of suspects stuck in a mountain lodge. There are some wonderful, evocative scenes as Doan wonders the train tracks, heads down against the blizzard, in the dark and finds a frozen corpse by match light or the encounter with the one-armed, lantern wielding stationmaster and his troupe of sled hounds – slightly unhinged and nurtures a grudge against the Alden family. The situation at the lodge is arguably worst: there's a nervous man from the bank who hired Doan, a secretary hell-bent on murder, a shady caretaker and a lost traveler.

A perfect set-up for murder, fisticuffs and emptying the remaining cartridges in Doan's revolver and, while the murderer became more and more obvious, the plot stuck together pretty well. Breezy, well-paced hardboiled story telling laced and occasionally funny, too! Well, it seems I have overused the padding to review this one story and I'll try to lay off the stuff for the next three stories. 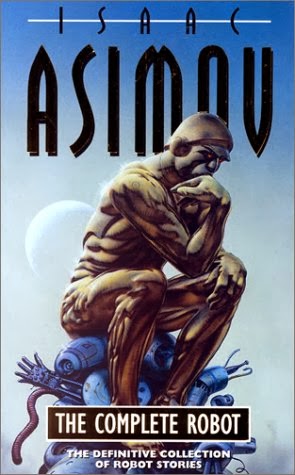 Isaac Asimov's "Mirror Image" was originally published in the May, 1972 issue of Analog Science Fiction and Fact, collected in The Complete Robot (1982), which marked the brief return of the Earth policeman Elijah Baley and the advanced Spacer robot R. Daneel Olivaw after their last joined investigation in The Naked Sun (1957). Baley is surprised when Olivaw turns up on Earth on a Spacer ship, but there's a professional character to his visit. There are two passengers, a pair of eminent mathematicians, accusing each other of plagiarism and the story has the potential to cause a tidal wave of scandal across the academic worlds of the Settler planets – unless Baley can sort out the mess before taking off again. They both tell the exact same story, except the names in their story are reversed, and even their servant robots repeat the conversation verbatim. Again, the names are swapped. Clearly, one of the robots was instructed to lie and exposing the truth lies in understanding how the lying robot interpreted TheThree Laws of Robotics. "Mirror Image" is a fun little quip, but one that felt immeasurable small in comparison to its monumental predecessors, The Caves of Steel (1954) and The Naked Sun, in which Asimov excelled as he created entire worlds with civilizations, history, technology, infrastructure and political structures, and still remembered he was writing a detective story. But more importantly, it refuted the argument that modern forensic science killed clever, old-fashioned plotting decades before it was made. Asimov was so much more than just a Visitor from Science Fiction to the mystery genre.

I count the husband-and-wife writing tandem of William and Aubrey Roos, writing under the penname of "Kelley Roos," among my favorite mystery writers and if you're wondering why, you obviously haven't read The Frightened Stiff (1942).

"Two Over Par" is a short story, collected in the anthology Four and Twenty Bloodhounds (1950), featuring Jeff and Haila Troy – New York's meddlesome, wisecracking amateur sleuths and they were the best. Jeff and Haila Troy are indulging in their latest fad, which happened to be golf, but they are quickly drawn in their favorite past time when they uncover two bodies in the thickets of the golf course. Mrs. Carleton and her caddie, Eddie Riorden, were shot through the head and this gives rise to multiple possibilities. Based on a 1948 novella I read, "Beauty Marks the Spot," I assumed Roos needed novel-length stories to fully shine, but here we have the same, satisfying dovetailing of plot threads combined with their trademark wit and even a twist solution. My only complaint is that it wasn't a full-length novel.

G.D.H and M. Cole's "The Owl at the Window," collected for the first time in Superintendent Wilson's Holiday (1928) as "In a Telephone Cabinet," mentioned every know and then as a splendid example of short impossible crime stories, however, I found it to be a tad-bit dated. The story opens with Wilson and his friend, Dr. Michael Pendergast, stumbling on a man breaking into the locked home of his friend who failed to respond. As to be expected, the man is murdered and lies dead in the telephone cabinet of his home. His face blown apart from the discharge from a blunderbuss, which also happened to be the only remarkable feature of the story. The lack of suspects makes the solution only more obvious than it already was and I have seen this set-up done better in Arthur Porges' "The Scientist and the Wife Killer," which can be found in The Curious Cases of Cyriack Skinner Grey (2009). So a little bit of a disappointment.

Finally, it's interesting to note that I picked these stories randomly, but, nonetheless, there emerged a connecting theme: all of the culprits did too much to cover up their misdeeds and, thereby, exposed themselves to the detectives. And that explains the opening quote.
Geplaatst door TomCat on 1/12/2014