Keep Your Head in the Game

"Now, I give you fair warning... either you or your head must be off, and that in about half no time!"
- Queen of Hearts (Lewis Carroll's Alice's Adventures in Wonderland, 1865)

The penname of Frederic Dannay and Manfred Lee, "Ellery Queen," is synonymous with such tropes as the "Dying Message" and "A Challenge to the Reader," in which the reader is invited to pick up the gauntlet and solve the problem them self.

So, not very surprisingly, I wormed through practically the entire series when I discovered the phenomenon known as the Golden Age detective story. There is, however, a problematic issue I have nurtured over the years regarding their locked room mysteries and impossible crime tales. They can be too clever for their own good (The Chinese Orange Mystery, 1934), mind numbingly obvious (The Door Between, 1937) or shoot themselves in their own foot with a daft explanation (The American Gun Mystery, 1933), but the worst of them are the ones that are actually pretty good – except that they are buried in bad or little-known, short stories. The King is Dead (1952) and A Room to Die In (1965) are examples of good locked room ploys stuck in horrendous novels and "The Three Widows," from Q.B.I.: Queen's Bureau of Investigation (1955), is a case-in-point of a good, but obscure, story that has one of their cleverest impossible methods. "Snowball in July," from the same collection, also deserves a mention, because it came up with an alternative solution to make a train disappear between two stations. 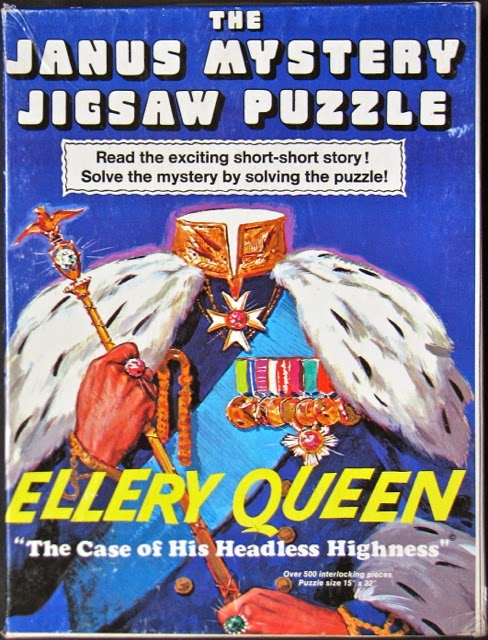 Well, I stumbled across another one of their great ideas for a baffling locked room scenario, but, even more baffling, it was condemned to obscurity from its conception. The Case of His Headless Highness (1973) is a Janus Mystery Jigsaw Puzzle with a short, open-ended story by Ellery Queen on the back of the box. You're supposed to solve the mystery before finishing the puzzle and the complete picture will show if you were correct, which is a novel idea, except that it probably didn't reach the audience that their novels, magazine stories, radio plays and TV-and movie adaptations had.

The Case of His Headless Highness begins with Ellery Queen and Inspector Jiggs standing over the slain remains of "His Royal Ex-Highness King Musaka of Zharkan," who escaped to America after a revolt and the new ruler has put a bounty on his head – which made Musaka particular suspicious and wouldn't allow anyone in his room at the boarding house. Musaka was basically a hermit with a strong lock on the door with a peephole in it and the only person allowed to enter was his loyal servant, Igor, but someone still managed to pass the secured door and get away with the king's head!

What makes the solution particular interesting is that it doesn't hinge on manipulating locks, windows or your perception of time-and space, or the "blinkin' cussedness of things in general," but on how to lure a recluse out of a tightly locked room – and still make it appear as if the killer had all the maneuverability of Jacob Marley's ghost. If The Case of His Headless Highness (or idea) had been fleshed in an actual short story, it probably would've been one of their most well-known shorter works of fiction and delivered another classic locked room mystery rivaling "The Lamp of God" (from The New Adventures of Ellery Queen, 1940). But what did they do with it? A one-page, opened ended story on the back of a box for a jigsaw puzzle!

You can read the story for yourself at Ellery Queen: A Website on Deduction and at the end of the page, you can click a link to a picture of the completed puzzle showing the solution.

By the way, Dannay was reputedly fond of changing story titles when he edited Ellery Queen's Mystery Magazine and couldn't help but think that The Call of the Land Pirate would've been a great alternative title. If you have read the story and saw the pictured solution, I recommend you read this definition of "Land Pirate" and you'll have to agree with me.
Geplaatst door TomCat on 8/19/2014