"In my cases, sir, you can have practically everything."
- Dr. Gideon Fell ("The Hangman Won't Wait," collected in The Door to Doom, 1980)

Yes, I know. I have criminally neglected this blog over the past few months, but, hopefully, activity will now revert back to its regular pace without any interruptions. And now, without further ado... 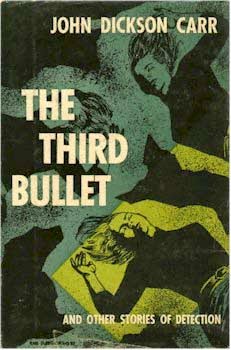 The Third Bullet and Other Stories of Detection (1954) is a collection of short stories by John Dickson Carr, one of the Old Masters of the Impossible Crime tale, who seldomly disappoints – even if I knew a few stories from other books and incarnations (i.e. radio plays). A novella, "The Third Bullet," opens the collections and stars a prototype of Colonel March (e.g. The Department of Queer Complaints, 1940), Colonel Marquis, tasked with looking into the seemingly impossible shooting of Charles Mortlake. Mortlake was shot in his pavilion, which exits where either bolted shut or under observation and the evidence points to one person. The explanation follows Merrivale's Law of the "blinkin' cussedness of things in general," which made an extremely confusing murder appear to be completely impossible, however, it's main weakness is its length. It should've been much, much shorter. I can also recommend the mini-anthology Locked Room Puzzles (1986), which includes this novella and three others by Bill Pronzini, Clayton Rawson and Edward D. Hoch.

"The Clue of the Red Wig" details the peculiar circumstances surrounding the murder of Hazel Loring, a columnist with a loyal following of housewives who read her weekly column, "Smile and Grow Fit," whose denuded body was found on a park bench in Victoria Square on a cold December night – most of her clothes neatly folded besides her. A young, cheeky Franco-British journalist, Jacqueline Dubois, takes on the case on behalf of the Daily Record and helps Inspector Adam Bell find a clever answer to the baffling problem. Miss Dubois herself brings some Gallic flair to a quintessential English detective story, saying such things like "hot ziggety dame!" and offering to make love to the Assistant Commissioner in exchange for a scoop. And, of course, casting a young, French journalist as one of the detectives is nothing more than a poorly disguised nod and a wink at one of Carr's favorite locked room mysteries, Le Mystère de la chambre jaune (The Mystery of the Yellow Room, 1907) by Gaston Leroux.

"The House in Goblin Wood" is one of few short story appearances for the Old Maestro, Sir Henry Merrivale, and it's generally considered to be on par with the best full-length cases of H.M. Twenty years before the opening of the story, a young girl, named Vicky, disappeared from a house that was locked and bolted from the inside – only to reappear a week later with a story of having lived with the fairies. When she returns to the house two decades later, she disappears again under similar circumstances, however, this time it becomes a grim fairy-tale. This is like G.K. Chesterton at his best: treacherously benevolent on the surface.

"The Wrong Problem" is a semi-inverted mystery with the tendency to twist and turn, in which Dr. Gideon Fell has a talk with a man by a lake, located in a valley in Somerset, about a crime that has been buried in the distant past. There's an artificial island in the lake with a summerhouse and the man was suspected to be responsible for the death of two of his family members, who died in the summerhouse. One of them in a bare, top-floor room with bars decorating the sole window and the only door was under constant observation. The method was recycled from another story, but, as a whole, it was nice, leisurely and well clued detective story. 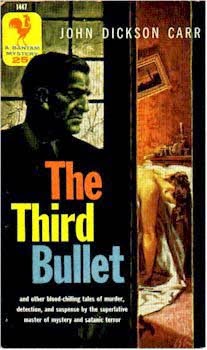 "The Proverbial Murder" involves the fatal shooting of Dr. Ludwig Meyer, a German refugee, working a dissertation on atoms and the police surrounded the cottage at the time, because his English wife had reported him as a spy. Ardent readers of Carr will probably figure out large swats of the solution before Dr. Fell. There are bits and pieces that cropped in other stories, but even without that it's not that difficult to get on the right track. A simple, but nice, detective-meets-spy story.

I was already familiar with "The Locked Room" as a radio play, in sound and script, in which a book collector, Francis Seton, is assaulted inside his locked and guarded office, but Dr. Fell makes short work of the problem. And, to be honest, the story is a notch or two below Carr's best and the locked room problem/solution impressed me as sloppy in their presentation. Not all that bad, but also far from the best.

"The Man from Paris" shows why John Dickson Carr is grossly underrated as a writer of historical mystery-and adventure stories and here he combines it with his talent to imitate 19th century fiction writers. In the Dr. Gideon Fell mystery The Mad Hatter Mystery (1933), Carr wrote a completely imaginary, but very convincing, passage from a lost Edgar Allan Poe tale. Here a Parisian travels to America to right a wrong, but is confronted with a dying woman and her will that has disappeared under impossible circumstances, however, as a mystery, it’s only of interest for the secret identity of one of the characters – and the historical atmosphere of mid-19th century America, if you enjoy historical mystery. By the way, while I was reading the story, I suddenly wondered who the president was at the time and the story immediately answered with a reference to Zachary Taylor. As to say, here dummy. Hey, it could've been James Polk, right?

And thus concludes my first, proper review in what feels like ages and I have still failed in giving my all-time favorite mystery writer a bad review, which I solely blame on Carr for insisting on being an unapologetic mystery writer. I mean, how can snooty purist like me take umbrage at a man who loudly proclaimed: "...I wanted to write detective stories. I don't mean that I wanted to write great novels, or any nonsense like that! I mean that I simply damn well wanted to write detective stories." It's an attitude that's strongly reflected in his work and it's a stance that's still hugely appreciated!