The Sound of Detection

"This is The Man in Black, here again to introduce Columbia's program, Suspense... If you've been with us on these Tuesday nights, you will know that Suspense is compounded of mystery and suspicion and dangerous adventure. In this series are tales calculated to intrigue you, to stir your nerves, to offer you a precarious situation and then withhold the solution... until the last possible moment... we again hope to keep you in... Suspense!" 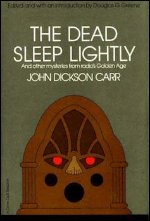 John Dickson Carr, to me, was simply the greatest detective writer who ever lived. Who else, but Carr, was able to combine a gripping narrative with an eerie, often menacing, atmosphere, first-rate plotting and dexterous clueing? Name one other writer in the genre who was able to walk as easily that fine tight-rope between sheer terror and utter farce without reducing the impact of either? Who of my readers, who haunt this blog with a certain degree of regularity, can claim they weren't swooned off their feet by the unapologetic manner in which basked in the fact that he didn't write great literature or any such nonsense? He freely admitted that he merely wrote daring tales of mystery, adventure and romance and their only objective is to lead you by hand into his beloved, fog-enwrapped London of Sherlock Holmes – "where high adventure awaits all who would seek it, in hansom cap or under a gas lamp in an Inverness cape."

In short: how can you not love an unapologetic romanticist who continued the grand tradition of Edgar Allan Poe, Gaston Leroux, G.K. Chesterton, R.L. Stevenson, Jules Verne and Conan Doyle – and absolutely revelled in it? However, this doesn't mean that his books, stories and plays haven't left us without any valuable lessons and observations. They've enriched my life by showing that simply being alive and having dreams is something worth fighting for!

The Dead Sleep Lightly (1983) is a collection of radio plays that are great examples of this attitude and exhibits the talents that earned him his reputation as the undisputed master of all things impossible!

The opening play of this collection perfectly demonstrates how effective his ability in conjuring up a spine-chilling atmosphere, to function as the backdrop of a seemingly impossible murder, actually was – as listeners were encouraged to turn-off the lights. This not only assisted in setting the mood, but also placed them in the same darkened, windowless chamber as where the story is set and the gargantuan Dr. Gideon Fell effortlessly solves the baffling murder of a disreputable medium during a séance. The spiritualist was securely tied to an armchair, preventing any trickery on his part, while the other occupants of the room formed an unbroken circle by linking hands, but when the lights were extinguished someone, within the room, managed to stab him in the throat – and, needless to say, the only door was dead-bolted from the inside. The ease with which Carr puts forward a maddening impossible situation and then explains it away as if it was nothing is a testament to his talents both as a natural storyteller as well as one of the shrewdest plotters the genre has ever seen!

As the preface of the play notes, this is one of Carr's several takes on a cursed room that kills everyone daring enough to venture pass its threshold. The man who's brave enough to take on the challenge in this story is a young nobleman who plans to marry a girl, but has to convince her ward, a Hungarian count, that he's sincere – and makes a bet with him that will earn him his niece's hand if he can survive a night in the accursed Tapestry Room at his estate. This is, however, not a locked room problem, like The Red Widow Murders (1935), but more a remarkably well-told suspense story with an howdunit angle thrown into mix and a neatly done twist ending. I recommend you listen to the original broadcast before reading this story and marvel at Peter Lorre's performance as Count Kohary.

The Dragon in the Pool

This play, in essence, is one long dénouement, in which a young woman assembles all the key players in the unresolved death of her father – and extracts a particular brutal revenge by giving the responsible person a dose of his own medicine. The method for concealing a knife in plain sight won't stump many readers today, but it was a pretty novel idea at the time. A decent enough story, but not the best of the pile that makes up this collection.

The tale of a man who's being haunted by the ghost of his ex-wife has always been one of my favorites of John Dickson Carr's shorter works, and the initial version he wrote for Suspense is very well-known, but this extended adaptation of that story is even better than its original! First of all, he had more time to tell the story and these extra minutes were put to use to add Dr. Gideon Fell and Superintendent Hadley to the cast of characters. It also has everything you come to expect from him: gripping story telling, eerie atmospheric touches and a clever, spooky impossible crime presenting itself as a spectral voice, speaking from beyond the grave, through a disconnected telephone, but the solution is, interestingly enough, more typical of John Rhode than of Carr himself.

By the way, I absolutely love this line: "But the dead sleep lightly. And they can be lonely too." These simple words were uttered by the ghostly voice over the dead telephone, but carry the eerie implication that the big sleep does not necessary mean internal slumber and that the dead can stir from their long nap in search for companionship.

A young man lost his shirt in a French casino and is approached by a shady character to sneak a bottle of pills pass customs service in exchange for a wad of money, but later that night everything collapses as he witnesses how his new "employer" is stabbed to death in an empty street by an apparent invisible assailant. The trick that made the murderer imperceptible to onlookers is a good one, but devotees of Carr have probably seen him put this gambit to use before.

The theme of this play is trust and that of Harvey Drake is put to the test when Dr. George Grimaud, the Home Office Pathologist posing as a palmist and crystal gazer at a country bazaar, informs him that he suspects his fiancée of being a feared poisoners – and his him marked as his next target. There's also an impossible angle, hovering in the background, as to how poison could've been introduced in the food and drinks of pass victims, but that's, once again, a clever ruse we've seen before. However, it's still overall a pretty good story with a neat little twist at the ending.

Here we have Carr reworking a ghost story, Bierce's "The Suitable Surrounding," into a thrilling tale of suspense with a naturalistic conclusion, and propounds the following question to the readers: can words that make up a manuscript of a horror story induce enough fear to kill its reader? Well, in Carr's stories you can practically have everything, and teaches us the invaluable lesson to never accept any challenge proposed by a writer of ghost stories. They're creeps!

This story is very much in the tradition of the slapstick approach of some of the Sir Henry Merrivale stories, in which a journalist and his female companion stalk the blood streaked trail of a notorious serial killer from Paris – and it's littered with "coincidences worthy of P.G. Wodehouse, combined with the subtle clues worthy of John Dickson Carr." This is how farce should be combined with a proper detective story. You can chalk this one up in the column of favorite stories by the best detective writer this genre has ever known!

The Villa of the Damned

The impossible premise of this story, in which not only an entire suburb disappears but also, for a brief moment, an entire century, is probably one of his most daring ones – and in combination with a solid plot makes for a pretty memorable story all around. However, like miracle problems involving houses and trains being spirited-away, the range of possible solutions are very limited and you don't have to be Dr. Gideon Fell or Sir Henry Merrivale to immediately stumble to the mechanics of the trick.

All in all, a pretty strong collection of plays that merge the golden eras of both the detective story and radio drama, and the only (minor) complaint I can make is that I knew most of the stories from previous incarnations or have seen certain gimmicks before in other stories. But if you're, like me, hopelessly devoted to Carr, than you definitely have to fill in an empty spot on your shelves with a copy of this book. I also highly recommend this collection to people who enjoyed Ellery Queen's The Adventure of the Murdered Moths and Other Radio Mysteries (2006) and Anthony Boucher's The Casebook of Gregory Hood, Radio Plays (2009).
Geplaatst door TomCat on 5/27/2011