"We mustn't confuse what's impossible with what's implausible. Most of the stuff I cook up for a living relies upon systems that are highly implausible. That's what makes it so difficult to solve. No one ever thinks you'd go to that much trouble to fool your audience."
- Jonathan Creek.

I don't want to make a habit out of publishing two blog posts in one day, but I'm bored out of my mind and I just finished reading a fairly interesting impossible crime novel – so why not ramble on for a bit here, eh?

First off, you should know that Patrick seems to be the instigator here as it was his series of excellent reviews of Paul Halter's locked room stories that kick-started a minor discussion about his strength and weaknesses as a mystery writer – and eventually trailed off in a conversation about French detective stories in general. This prompted me to wring a few names through a search engine and discovered that one or two of them were within reach of my covetous claws! The first one I snatched up was Martin Méroy's Meartre en Chambre Noir (Murder in a Darkened Room, 1965), which I had seen described as a locked room mystery and the ever-helpful Xavier Lechard, who's a walking encyclopedia on the French detective story, beefed up that meager piece of information with the following description:

"Not much is known about Martin Méroy except that he was a prolific writer of
softboiled fiction in the early sixties, writing in particular about a private detective named... Martin Méroy. These are fast, fun reads with interesting, inventive plots often involving locked rooms. I haven't read this particular one, but I'm confident it's quite readable if not revolutionary."

Martin Méroy is without doubt a hardboiled gumshoe in the tradition of Sam Spade and Philip Marlowe, who takes no guff from nobody and knows how to land a punch and fire a gun with equal skill, but at the same his misses that lone knight attitude that is so typical for these kind of private eyes. For example, when a woman asks him to retrieve a letter for her he tells her she can pay him with her body! That's just something I couldn't see private ops like Nameless or Lew Archer doing to their clientele. They can hold their own in a bare-knuckle fist-fight with street thugs or in all-out gun fight with a gangster or two, but never turn a potential client into a private prostitute.
Oh well, his main client of this book, a famous and world renowned stage magician, The Great Zambini, is allowed to pay his fee in cold hard cash and the job description consists of guarding him against any attempts made on his life. The magician has a vague notion that he might be in mortal danger, but can't give the exact details as to how and why to his short-term employee. However, during one of his most acclaimed illusions, which he dubbed The Secret of the Darkened Room, he fails for the first time to emerge from a sealed bank vault – and when they swung open the heavy steel door he was still tied up in a locked trunk with a knife handle projecting from his chest! But how could anyone have slipped unseen into a solidy welded steel and sealed vault, plunge several inches of steel between the ribcage of a man who was still locked up in a trunk wrapped with chains, and vanish before the door was opened again? 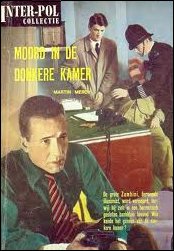 The solution is actually a slightly more complicated variation on one of the oldest tricks in the book, but it was done with enough skill and aplomb to warrant some appreciation and Méroy also explains how the trick would've normally worked as well as how an on-stage transformation was pulled off – which are nice little extras for us aficionados of the impossible crime story.
But I have to honestly say that I preferred my own solution of the sealed vault trick to the one that was given, which I imagined involved doctoring with the trunk and turning it into a single-spiked iron maiden by fastening a hidden knife to the inside of the lid. I'm sure it's possible to rig up some sort of deadly contraption with a knife, spring and a strap. It would also give the story a nice, but exceedingly dark, twist by making the person who closed the lid an unwittingly accomplice to the murder. Yes, I'm brilliant like that.
Xavier Lechard was justified in assuming that the book would be quite readable, you burn through the chapters at breakneck speed, but it's not exactly a revolutionary locked room story. It's combination of hardboiled story telling and orthodox plotting definitely makes it an above average effort, but it's not on par with such staggering masterpieces as John Dickson Carr's The Hollow Man (1935) and John Sladek's Black Aura (1974).
Geplaatst door TomCat on 5/27/2011