During the wintry days of early 1304 a professional and hooded assassin, known as the Mysterium, re-emerges after pulling a disappearance act from a locked and closely guarded church twenty years earlier, where this figure sought sanctuary after being unmasked, to settle old debts with a cut-throat interest rate. It's one of the many problems that keep Sir Hugh Corbett, Keeper of the Secret Seal and eyes and ears of King Edward I, and his right-hand Ranulf busy for the better part of Paul Doherty's The Mysterium (2010). 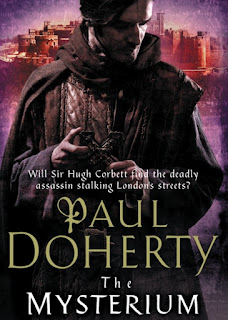 Walter Evesham is the ex-Chief Justice who fingered Boniface Ippegrave, a clerk attached to the Office of the Privy Seal, as the Mysterium and capitalizes on this success, but when this story opens he's facing corruption charges and fled to the same church as Boniface to atone for his sins. Or so he said. It's also the same church where Boniface's sister, Adelicia, and Brother Cuthbert, a man Evesham spiritually ruined, live and the inevitable eventually happens: the loathed Evesham is found dead in his cell. His throat is cut and the door was barred from the inside as well as the outside with wooden beams and a wafer-thin slit for a window high in the wall. The chamber was, for all intent and purposes, an impenetrable prison cell.

The solution as to how the murderer managed to bar the door on the inside of the cell was, as to be expected from Doherty, uncomplicatedly simple and absolutely workable, which may disappoint some readers, but you have to give the author props for finding a good motivation to turn Evesham's murder into one of those locked-door problems. I can be satisfied with a simple trick to turn a crime-scene into a sealed room, but I want some of the authors ingenuity that was lost on the impossible element of the story invested somewhere else in the plot (e.g. Anthony Boucher's The Case of the Solid Key, 1941 and Manly Wellman's Find My Killer, 1947) and that was definitely the case here. The explanation how the accused, Ippegrave, gave his guards the slip was one that, alas, traversed over trodden ground, but, again, not entirely without interest.

More murders are committed, all of them connected to Evesham, like his former clerk Engleat, who was lashed to the decaying remains of a condemned river pirate and cast into the inky abyss of the Thames, an old punishment for perjurers, and they all had the letter "M" incised into their foreheads – the signature of the Mysterium. It means Mysterium rei (The Mystery of the Thing). But even this barely describes half of the intrigue of this book, which seems richer and more fertile in both plot and writing than any of his other novels I have read and reviewed on here. As a matter of fact, I don't think I have ever seen Doherty being this generous with clues!

I might have over praised another book, but The Mysterium is the kind of detective story I enjoy the most, with its locked rooms, impossible disappearances, ciphers, clues and an actual plot to dissect. Is it perfect? Of course not. But it was written in the same spirit as the best historical mysteries by John Dickson Carr, Robert van Gulik and Bertus Aafjes.

All the books I have reviewed by Paul Doherty: