The dog days of summer are not renowned for creating an atmosphere ideal for reading a Christmas mystery, even if the canicule has its off-days, but the humidity, outbursts of summer rains and lack of snow did nothing to diminish Gladys Mitchell's Dead Men's Morris (1936), a tale of Yuletide, folk lore, Morris dancing and ghostly murder, set in the rustic countryside of rural Oxfordshire. 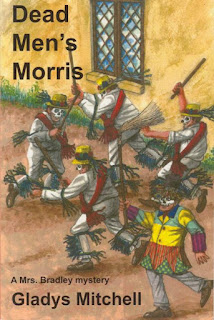 Mrs. Beatrice Lestrange Bradley, whose ophidian features insinuates a kinship with the swarm of fossils wrenched from the numerous layers of the Earth strata, descends on Oxfordshire to spend the holiday at the pig farm of her nephew, Carey Lestrange, and we're forthwith served with a plethora of characters and events that testify to her gift as a novelist and born storyteller. But this is, after all, a detective story and Mitchell assigned the role of the inaugural corpse to Edmund Fossder, a country-lawyer with masynogistic tendencies and a feeble heart, who, according to village gossip, received a note challenging him to keep a tryst with one of the local ghosts, a headless horseman known as the Sandford Ghost, which becomes more than a rumor when Fossder is found dead on a towpath next to a river.

Evidence picked up at the scene indicates a pursuer was on Fossder's heels, before sinking to the ground with a stopped heart in his chest, but the police has no interest in cordoning off the area and turning it into a crime scene. They're satisfied that it may have been a prank gone awry. An incredulous Mrs. Bradley begins her own investigation, sort of assisted by Carey, and disentangles one of Mitchell's knottiest problems – eventually leading up to a second murder, that of the curmudgeonly Simith, who was gored to death by a savage boar with the legend of the Shotover Boar roaming in the background. As I said, it's a very a tricky and knotty problem with lots of shenanigans and restless suspects abound, and that makes it even trickier to properly describe the plot without giving anything away.

The plot buzzes like a beehive with characters constantly sneaking about the place, theories being expounded and snooping around for clues without becoming a mere puzzle. Mitchell's sketches characters with the eye of an artist and this amusing lot, populating the Oxfordshire countryside, definitely compliments the landscape, which, I always felt in her stories, have the descriptive quality of a fairy-tale. Then again, how else can you define the mental image that Mitchell conjured up of Mrs. Bradley, the benevolent witch from children's fables turned detective, covered only by her underwear, taking-off cross-country like Roadrunner in order to get help for her nephew, who's holed up in a secret passage, or a line suggesting that "out there, in the quiet and the dark, a ghost seemed germane to the landscape, not alien—a possibility, not an old wives' tale"... Mitchell had a touch similar to John Dickson Carr to naturally blend a seemingly peaceful environment with the presence of local legends and ghosts, except that Carr's a nightmarish while Mitchell's are fairytales in which the Grim Reaper as he goes about his daily business, but the presence of Mrs. Bradley always gives them a benevolent touch. I think this is why Mitchell couldn’t read any of Carr's books.

But where Mitchell really excelled here was in plotting, which can be an Achilles' heel that acts up from time to time in her books, and the busy and cluttered plot had me worried for a while, but a few sweeps with a witches' broom neatly cleaned it up – and that makes reading Mitchell even more enjoyable than it already is. Like a stronger than usually plotted Rex Stout novel. In short, I enjoyed this book, but advise readers who are new to the series to begin somewhere else like the imaginative Come Away, Death (1937) or the excellent St. Peter's Finger (1938).

Other books I have reviewed by Gladys Mitchell:

Oh, there was a short scene in the Detection Club and Mrs. Bradley is an honorary member! :)
Geplaatst door TomCat on 8/06/2012