The Australian-born D.L. Champion was educated in New York and soldiered in the British Army during the First World War, but achieved notoriety as an inventive, cerebral writer of dime detective stories and produced "several million words of pulp fiction" during the 1940s – published in such magazines as Black Mask, Ten Detective Aces and Flynn's Detective Fiction. Between 1938 and 1946, Champion penned a series of twenty-nine detective stories for Dime Detective Magazine that are pulp pastiches of Rex Stout's immense, grouchy Nero Wolfe. 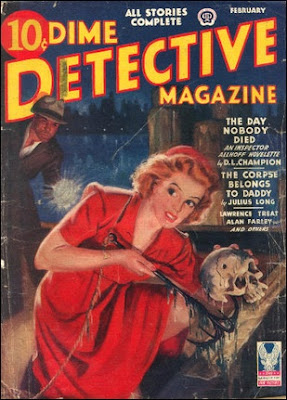 Inspector Allhoff is a former New York City Police Inspector, who lost both his legs in "a hail of machine-gun bullets," but his commissioner refuse to lose his best man to civil service rules forbidding a legless inspector of police.

So "devious bookkeeping devices" arranged it that Allhoff was paid his old salary and continued to work under the department's sponsorship. Allhoff moved into a dirty, rundown apartment across from headquarters. A flop-house with grimy window panes, dirty floors and "a platoon of cockroaches" that had established "a beachhead upon the edge of the uncovered garbage can." Allhoff never leaves this filthy rat hole, but the commissioner appointed him two legmen, Battersly and Simmonds – which is where the series becomes interesting. Battersly was "a raw recruit" when Allhoff was a rising star with "two good legs and first-rate brain cells," but Battersly got "buck fever" when they attempted to arrest two murderers. The bungled arrest ended in the shootout that lost Allhoff his legs. And this left him slightly unhinged.

The relationship between Archie Goodwin and Nero Wolfe can be described as symbiotic, but Allhoff and Battersly have, what borders on, a sadomasochistic relationship.

Allhoff insisted Battersly was assigned to him and the commissioner, who had "a strong sense of poetic justice," complied with his demand. Allhoff despises Battersly and takes pleasure in verbally abusing or mentally torturing him. During one point in the story I read, Allhoff learned Battersly had complained about sore feet and exploded. He called the young cop a "whining, yellow dog" who has "the cast-iron gall to squawk" when it was him who had amputated his legs. Just imagine Christmas dinner with these two sitting at the table.

The short story I read is an often praised locked room mystery, "The Day Nobody Died," which was originally published in February, 1944, issue of Dime Detective Magazine.

Battersly and Simmonds go to Allhoff's apartment with "a murder case Homicide knows nothing about." A girl by the name of Harriet Mansfield tells them of a third-floor studio in Greenwich Village and inside is a dead midget with a bullet wound in his head, but the only window is locked on the inside and faces a blank wall – while a solid, two-inch thick wooden bar blocked the door. She can't tell them how she knows there's a dead body in this locked, third-floor studio apartment, because she swallowed a poisoned aspirin tablet while Allhoff was verbally browbeating Battersly. Mansfield was an aspirin addict and someone had dropped a poisoned tablet in her bottle. 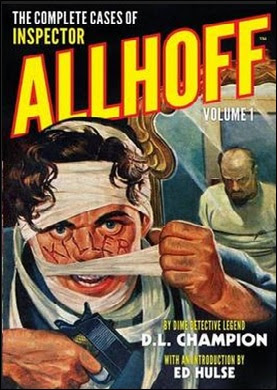 A murder in Allhoff's apartment/office, right under his nose, has to be a nudge and wink at Stout and Wolfe. So many people have died in their famous brownstone (e.g. "Eeny Meeny Murder Mo" from Homicide Trinity, 1962), I once joked that all the bloodletting there was a sacred ritual to keep them unaffected by the ravages of time.

However, one thing even Wolfe never dared to do was covering up a murder that was committed on his premises, but this is exactly what he does and uses it as bait to capture the murderer. A harebrained plan that almost worked, but Battersly fell asleep during the stakeout and allowed the murderer to slip through his "clumsy hands," which resulted in even more abuse – even holding him responsible for the failure of his backup plan. A plan that required the wrist-watches of all of the suspects.

The plot of "The Day Nobody Died" is a surprisingly rich and consists of multiple layers and plot-threads, which are all tied to the central problem of the impossible murder in the locked studio.

Firstly, Robert Adey mentioned in Locked Room Murders (1991) that the solution, as far as he knew, was original and this is probably true. However, Edward D. Hoch used a variation on this locked room-trick for one of his own impossible crime stories from the 1980s. A trick I remembered very clearly and this helped me piece together the trick that was used here. Fortunately, the story also had two additional problems, such as the murderer's bulletproof alibi, which was very well clued and nicely played with people's assumption. And then there's the plot-thread about a valuable letter written by George Washington in 1752. This plot-thread has a distinct touch of Ellery Queen, who wrote several presidential themed short detective stories themselves, and the twist here is exactly what you'd expect of an EQ short story or radio-play.

"The Day Nobody Died" is a truly original, well written and tough pulp mystery with an unforgettable pair of dysfunctional detectives and a story that can stand with the best private-eye locked room novels by Bill Pronzini – e.g. Hoodwink (1981), Scattershot (1982) and Bones (1985). A genuinely cerebral detective story were not exactly the norm in most pulp magazines, but Champion and Allhoff were definitely an exception to that rule. Champion manage to perform a shotgun wedding between the traditional armchair detective and the hardboiled crime stories, which is beautifully exemplified when Allhoff outwits the murderer with the assistance of a strong-arm cop. A cop who had "broken a number of tough cases" with "a baseball bat, a rubber hose and a soundproof room."