Balbane, the Conjurer Detective: "The Twisted Bullet" (1921) by Lewen Hewitt

Lewen Hewitt is a little-known, long-since forgotten mystery writer of short stories, whose work was mostly published in Detective Story Magazine, but as obscure as he has become today, Hewitt deserves to be remembered as the spiritual father of perhaps the first magician-detective of the genre, Balbane – who appeared in Detective Story Magazine from 1921 to 1922. Only six of these stories were reprinted a decade later in Best Detective Magazine. 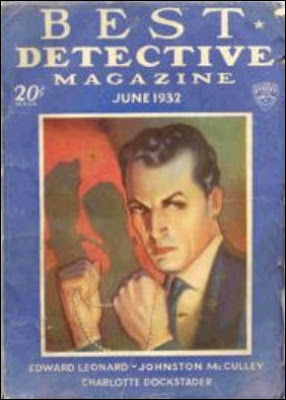 A second achievement you can possibly put to his name is that Hewitt might have written one of the earliest examples of that popular staple of the locked room mystery: an impossible murder during "a spiritualistic séance."

Hewitt's "The Twisted Bullet" was originally published in February 12, 1921, issue of Detective Story Magazine and was reprinted in the June, 1932, publication of Best Detective Magazine.

Mr. Trautman invited a spiritual medium, Finley, to "show his ghosts" as "a diversion from the ordinary dinner party" and had "prevailed upon the great Balbane to attend," but had warned the magician-detective that, in case of fraud, there was to be "no melodramatic exposure" – only murder made such a dramatic exposure a necessity. The séance started out normally enough with "seemingly miraculous" slate-writing and reading from sealed envelopes, but eventually "the shape of a fiery ball" appeared in the center of the table. When the lights were turned on, they found "a great heap of purple violets" on the spot where the fiery ball was seen.

These are the simplistic, stock-in-trade, tricks of the fraudulent medium and I remember John Sladek's Black Aura (1974) had an excellent and entertaining rundown of most of these cheap parlor tricks.

A second séance is conducted and the ball of fire reappeared in the darkened room, but the magic of the moment was shattered by an explosion. Once again, the lights are turned on and a revolver lay in the middle of the table with "a wisp of smoke curling from its barrel," which pointed to the chair of a man named Hargrove – who's leaning back in his chair with a bullet hole in his forehead. So who fired the fatal shot. And, more importantly, how? All of the participants formed an unbroken circle of linked hands.

Trautman is not partial to "thickheaded policemen" and implores Balbane to reveal the murderer before the police arrives, but nearly everyone seated around the table turns out to have a motive. So the magician-detective decides to stage the third séance of the evening and lure out the murderer by using himself as bait.

Regrettably, the solution to the impossible shot in the darkened room with everyone locking hands is not as good, or imaginative, as its premise and impressed as a little impractical. Surely, one particular person should have noticed that something was amiss. I think I would have noticed it. In any case, "The Twisted Bullet" deserves recognition for being one of the earliest examples of a (locked room) murder during a séance in a pitch-black room. A premise with an enduring popularity and used by mystery writers to this very day. So definitely a notable title as far as the history of the genre is concerned.

Finally, in order to pad out this very short blog-post, I'll dump a list of links here to other reviews or posts about séance-themed detective novels and short stories.

Five to Try: Debunked Séances in Detective Fiction by "JJ" of The Invisible Event.
Geplaatst door TomCat on 1/14/2019