Alfred Rodrigues-Brent was a Dutch-Portuguese journalist, a World War II resistance fighter and, like Rex Stout, a World Federalist who wrote a detective novel and at least two short stories, "De dame in the rij" ("The Lady in the Queue") and "Moord in den morgen" ("Murder in the Morning") – published in the nondescript Detective Magazine. An obscure, short-lived publication from the late 1940s, but have been unable to locate these short stories anywhere. Fortunately, it was a lot easier to obtain an affordable copy of Brent's sole detective novel. 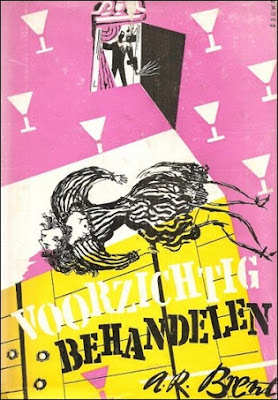 Voorzichtig behandelen (Handle with Care, 1948) is, as far as I can tell, the only recorded case of Chief Inspector Albert Joosten, of the Rijksrecherche (National Department of Criminal Investigation), who resembles "a well-fed baker" with a huge blind spot for official procedure and red tape. Joosten has a very personal and unorthodox methods that had raised some eyebrows in the higher echelons of the Dutch police apparatus, but even his superiors couldn't deny that, every now and then, his methods "produced brilliant results." So why get rid of a difficult, but excellent, police detective when you can simply add a little correction. A correction that came in the guise of an ambitious and promising young policeman, Inspector Sterck, but there's no animosity, or rivalry, between Joosten and Sterck. And when the story opens, Joosten admitted to the reader he had already succeeded in winning over the young inspector and, more or less, "bend him to his will."

Handle with Care begins with two longshoremen loading cargo from a ship onto a rail car when one of them notices a crate, marked "VOORZICHTIG BEHANDELEN," with three bullet holes in it.

Chief Inspector Joosten personally comes down to the docks to oversee the opening of the crate and discover the body of a woman, wrapped in a piece of tarp, who had cracked her skull in "the way an eggshell is smashed with a spoon" and she been dead for some time – somewhere between eight and fourteen days. So what about the bullet holes and, more importantly, who was the victim? What follows are excerpts from the autopsy report, chemical analyzes and answers to request for information from all over Europe, but much more amusing was Sterck's short excursion to France.

The crate had been shipped from Cannes, France, where Sterck's northern frame of mind and logic struggled with the southern logic of the French police. They were entrenched in their opinion that Sterck's "countrymen had abused French hospitality to settle their disputes on French soil" and "the possibility that any French citizens were involved was rejected out of hand." And this is why not being French is the foundation stone of Dutch and British identity.

Anyway, the body remained unidentified and, without any further leads, the case is temporarily shelved until new information or clues come to light.

So with an opening, like that, I expected this longer than usual detective novel to be Brent's take on Freeman Wills Crofts' massive debut novel, The Cask (1920), but the second part of the story was not, what you would call, a typical humdrum affair and strongly reminded me of a certain French mystery novel – namely Gaston Boca's Les invités de minuit (The Seventh Guest, 1935). The crate, one of many, came from the French villa of the elderly Otto van Everdingen and contained his household effects that were shipped to villa in the Netherlands. Van Everdingen had planned to permanently move back to his home country, but died before he could and now his relatives have gathered at his Dutch villa to divide the inheritance. They represent branches of two different families, Van Everdingen and Harms van Beuningen, who were tied by two or three marriages. Admittedly, the family ties can be a little confusing at times, especially in the beginning, which is not helped by a mistake in the family tree on the first page. According to the family tree, Frits remarried Marie's second husband, Gerard Voortman, which would have been a good fifty years ahead of its time. So my advise is to just read the story to get a handle on who's who. 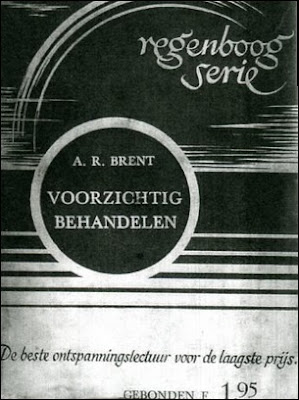 When the family patriarch passed away, "the monarchy changed into a family republic" and that would have been difficult enough without a string of bizarre, inexplicable and ghostly incidents happening at the villa. A piece of paper appears in the middle of a room with "I wish to know where I stand, tonight. I will not be mocked" written on it, while other letters disappear as easily as they reappear. Strange laughter is heard and suitcases are searched. There are only two possible explanations: either one of them is searching for something or someone has gained access to the village and is creeping around them like "some kind of invisible man." Sadly, the closest Brent came to including a full-fledged impossibility is when the intruder was spotted in a hallway and vanished, but this situation is almost immediately explained. And hardly qualifies as an impossible crime.

Joosten reenters the picture when, in the middle of the night, a painting is torn off the wall and burned, which could have set the whole house on fire, but he struggles with the plethora of incidents and mysteries facing him – which reaches it boiling point when one of them is nearly beaten to death. On the up side, these incidents finally revealed to him the identity of the dead woman in the crate and how her murder is tied to the people in the house... and the unseen prowler. This is also the point where the strength and weaknesses of the story became apparent.

So let's begin with the good: the plot comprised of many loose and moving parts, often operating independently, which could have easily resulted in an absolute mess, but Brent remained in full control and provided logical and rational answers to every single plot-thread. Some of the answers were very clever indeed. Such as why Otto Jr. gave Winnifred Smit the cold shoulder when they were reunited at the villa or why there were bullet holes in the crate, which was preceded by a false solution to the problem. The murderer was skillfully hidden and, while I spotted this character, it's the kind of revelation you hope to find in a vintage detective novel. Even if you anticipate it with a quarter, or so, of the story left to go.

On the downside, Handle with Care missed the polish of a more experienced mystery writer and the last leg of the story, in particular, was entirely absorbed by tying up all the loose ends, false solutions and eliminating suspects. Somewhat of a recommendation to Ellery Queen loyalists, but it can become tedious and the dated, old-fashioned writing style slackened my reading pace, which sometimes made it feel like those last dozen chapters never ended – taking some shine of an otherwise excellent detective novel. Another drawback diminishing, what should have been, a grand revelation is the patchwork nature of the plot. A plot driven by misunderstood actions and incidents. A shrewd use of a series of misunderstandings and incidents, but you expect something much grander from the premise. I can't help but wonder what the plot could have been in the hands of an expert plotter and master stylist (like John Dickson Carr).

Nevertheless, Brent spins a great deal of complexity around an ultimately simple situation and its always a pleasure to come across an authentic Golden Age detective novel written in my own language. Regardless of some of its shortcomings, Handle with Care is one of half-a-dozen Dutch detective novels I unhesitatingly recommend as a candidate to be translated. Most of its (stylistic) flaws can easily be ironed out in a modern translation. So, yeah, recommended with some very minor reservations.

A note for curious: if you're curious about my other recommendations... M.P.O. Books' De laatste kans (The Last Chance, 2011) is one of the best Dutch whodunits with one of the all-time greatest clue that you either immediately spot or miss completely. Books also wrote two excellent locked room mysteries, Een afgesloten huis (A Sealed House, 2013) and De man die zijn geweten ontlastte (The Man Who Relieved His Conscience, 2019; published as by Anne van Doorn). Cor Docter wrote three pure detective novels in the early 1970s that were structured as a whodunit, a locked room mystery and a dying message. Droeve poedel in Delfshaven (Sad Poodle in Delfshaven, 1970) is a superb whodunit, but can't remember why I changed the title to Melancholic Poodle in Delfshaven in 2012. I suppose “sad” didn't really fit the story. Koude vrouw in Kralingen (Cold Woman in Kralingen, 1970) gives the reader an entirely new locked room situation with an original solution that I've seen before or since again. Rein geheim op rijksweg 13 (Pure Secrecy on Highway 13, 1971) is a solid ending to the Commissioner Vissering trilogy. Eugenius Quak's Gruwelijk is het huwelijk (Marriage is gruesome, 2017) would be a challenge to translate, but a pleasantly weird blend of the modern (style) and classic (plot) detective story. Ted O'Sickens' De man die 'n paar maal vermoord was (The Man Who Had Been Murdered a Few Times, 1942) is very minor, but spirited, detective story with a literary relative of Dr. Gideon Fell playing the role of Great Detective. I also give my vote to (new) translations for Bertus Aafjes and A.C. Baantjer.
Geplaatst door TomCat on 10/23/2020