In one of my recent blog-posts, I alluded to my intention to start looking at the locked room mysteries of both the silver and small screen. I found an enticing case in the comment-section in favor of Banacek, but I had an episode from another series, namely Blacke's Magic, queued since 2013 – when I reviewed Ten Tons of Trouble (1986). A very ambitiously written, if flawed, episode about the miraculous disappearance of an enormous marble statue from a closely guarded museum.

This short-lived NBC series ran for only one season, comprising of a pilot and twelve 45-minute episodes, which starred Hal Linden as a famous stage magician, Alexander Blacke, who moonlights as an amateur sleuth. He was basically a 1980s prototype of Jonathan Creek. Harry Morgan played the Maddy Magellan to Blacke's Creek, which he did in the role of his father and as a semi-retired con artist of the old school. So they can be added to the short list of father-and-son detective teams I mentioned in my review of Clifford Orr's The Dartmouth Murders (1929).

The episode I had queued is the seventh entry in the series, entitled Address Unknown (1986), which has a plot revolving around one of the most alluring and rarest of all impossible problems: an entire street and a alleyway that inexplicably disappears from our plain of existence! From the top of my head, I know of only two examples of vanishing streets and added one of them only recently to my TBR-pile. So there you have another reason for my renewed interest in the episode.

During the first 15-minutes, the groundwork for the plot is laid down and concerns a potential government scandal, one with ties to the army, which runs straight to the high-placed and distinguished General Wersching – who has no compunction to (covertly) threaten Blacke when he comes to the aide of an old friend. Dale Richmond is the friend in question and hot on the trail of a corruption scandal, which he hopes to substantiate with certain documents and letters. He expects these documents from one Billy Maddox. The episode actually opens with a surreptitiously meeting between these two characters, inside a dark parking garage, but Maddox needs another day to get his hands on the incriminating papers.

However, the details about this particular plot-thread is somewhat muddled, but the first ten minutes show the brewing scandal plays havoc with Dale's personal and professional life – as his character is slandered in the media as mentally unstable. They also planted a federal marshal across the street of his home. So Dale is understandably on edge, but a telephone call from Maddox lightened his mood. This is followed by a short sequence (i.e. filler) which sees Blacke using the misdirection of the stage magic to help Dale escape the attentive eye of the marshal on his doorstep. 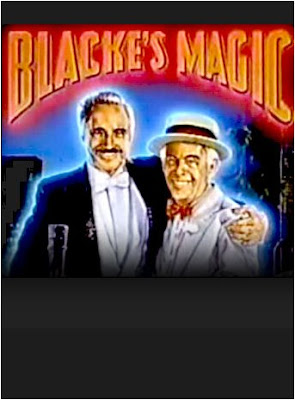 Dale is lead to a dark, empty street, called Republic Lane, where Maddox waves him towards a dark alleyway and into an abandoned storehouse, but before any papers can change hands a shot is fired and Dale has to run for his life – until he sees two cops in a coffee joint called The Donut Hole (of course!). But here's where the whole situation becomes an impossible one. The police officers have never heard of Republic Lane and Dale is unable to retrace his steps. Eventually, they managed to find his car, but the street where the car is parked is not the same as the street where he left it. As Dale said himself, "the whole damn street is gone."


So who killed Billy Maddox and what happened to his body, but, equally important, how did an entire street disappeared into the dark of the night? Simply wiped off the face of the earth! The answer is very simplistic and something to be expected from cheap 1980s television, but I managed to miss the obvious. My explanation was far too complex and involved for this kind of television. I assumed Republic Lane was one of those realistic "stage sets" used for military exercises, which was put together and taken apart by a platoon of soldiers. After all, the scandal was connected to a high-ranking general and the shooting scene was very reminiscent of the witnessed shooting from Carter Dickson's "The New Invisible Man," collected in The Department of Queer Complaints (1940), which also involved a vanishing room. So I assumed the general had called upon a few of his man to put a mere civilian in his place. Well, I was very wrong.

The rest of the episode is either cluttered or not very engaging: the plot-threads about the shooting and scandal are merely ornamental, which seem to have been written around the problem of the vanishings street and meant to eat up those minutes – until Blacke can work his magic and explain how the trick was pulled off. Same can be said about the "comedic" sub-plot: Blacke's father, Leonard, enters the picture and is followed by a string of bills pertaining to their New York apartment. But the source of those costs is not revealed until the final scene, which ended the episode on a light note. Not overly hilarious, but Leonard is a fun and loveable crook. His best scene from the episode was reminiscing how he once made a banking company disappear after taking a large deposit from a bootlegger in the 1930s.

I should also note that Blacke performed the famous bullet-catch trick when he cornered the murderer and this person attempted to shoot a way to freedom.

So, as a mystery, Address Unknown is a fairly weak and messily told detective story, which perhaps showed why the series got canned, but, regardless, I did not experience watching it as a drag. I guess the vanishing street gimmick playing out in front of me, which was the one part of the episode that was reasonably well done, intrigued me and I had fun imagining my own explanation. You've to decide for yourself whether you want to give this one a go.

Finally, allow me to draw your attention to my previous blog-post from yesterday, which is a review of Paul Halter's Le cercle invisible (The Invisible Circle, 1996).
Geplaatst door TomCat on 10/25/2016