The Thirteenth Bullet (1948) by Marcel Lanteaume

Thirteen years ago, the name of Marcel Lanteaume figured on, what's objectively, the best internet best-of list of the 2000s, John Pugmire's "A Locked Room Library," which described him as an impossible crime author who, like so many French mystery writers, appreciated "a touch of fantasy" in his crime fiction – which remained tantalizingly inaccessible to non-francophone readers. That is, until last October.

Lanteaume's La 13e balle (The Thirteenth Bullet, 1948) is the latest translation published by John Pugmire's Locked Room International and comes with an introduction by French anthologist and genre scholar, Roland Lacourbe. A short introduction that will both fascinate and horrify every obsessive locked room reader. 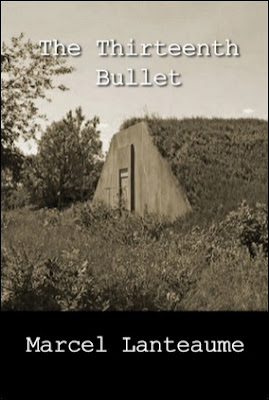 Lacourbe presents Lanteaume as a shooting star, "a temporary streak of light in the night sky," who wrote "three exceptionally works" between 1942 and 1944 to battle boredom during his captivity in a German prisoner-of-war camp, which actually reminded me of Joseph Commings – who wrote short stories to amuse his army comrades. Lacourbe compared Lanteaume to the "brilliant and fleeting" wonder of Hake Talbot, because they both disappeared after only a few novels. La Labyrinth published his three novels following the liberation of France and contained "a mouth-watering list of books in preparation," but they were never published following poor sales numbers. Disappointed with his failure, Lanteaume destroyed the unpublished manuscripts with such intriguing-sounding titles as Crime rue des fantasques (Crime in Weird Street), Le barbier massacré (The Butchered Barber) and La plaine sous le soleil (The Plain Under the Sun). Lost forever!

So, lamentably, we have to add Lanteaume's name and about a handful of his novels to the shelves of the Phantom Library of Lost Detective Stories. Thankfully, one of his novels that was published finally made its way, through LRI, to our our shelves.

The Thirteenth Bullet is, to quote one of the characters, "pure pulp fiction" reminiscent of Alexis Gensoul and Charles Grenier's La mort vient de nulle part (Death Out of Nowhere, 1945), John Russel Fearn and Gerald Verner. One of those wildly imaginative, hardly credible, but terribly fun, fairground rides that chases a serial killer who threatens the stability of France.

An average looking, clean-shaven man wearing a gray overcoat with a trilby of the same color is often the last person seen with the victims on a growing list of murders, usually harmless bachelors, whose only tangible link are the bullets that ended their lives – which were all fired from the same pistol. The press christened the murderer the man in gray, but, as the bodycount rises, the murders begin to have political implications. So the noted biologist and criminologist, Professor Fernand Richard, is asked to take charge of the case. Professor Richard predicts the man in gray is going to give them a lot of trouble, because murderers who think they're clever complicate things. This killer simplifies, "a sign of superior men," with clean and simple murders (a bullet to the heart). And he was right. 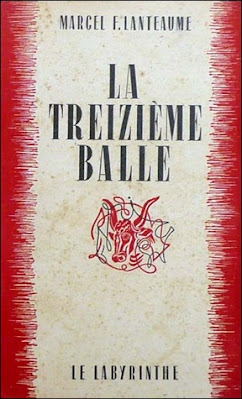 The first half of the story mostly consists of "running to prefectures of police all over France" to look "at bodies of males of various ages" and "questioning witnesses who have heard nothing and seen nothing." These dead men are nothing more than names in the story with exception of the shopkeeper, René Grandjean, who's described as a neighborhood detective with "astonishing powers of deduction." René Grandjean had used his deductive skills to solve baffling crimes "based on simple indications in the newspapers" or more "practical problems brought to him by his friends." So a whole series of untold armchair detective stories about a sharp-minded shopkeeper cruelly ended here with the detective falling prey to a serial killer or did get one or two of his stories get told? But they were among the destroyed manuscripts. These are the kind of questions that keeps an unrepentant fanboy, like myself, awake at night.

Anyway, the bodycount is close to touching double-digits before Professor Richards discovers something that puts them on the trail of the next victim, but they arrive too late and find another victim. But this time, the murder was committed in a house locked and bolted on the inside with steel shutters covering the windows. A murder with far reaching consequences that turns this almost routine serial killer story into a ripping pulp yarn that stockpiled wild twists and far-fetched turns.

Firstly, the murder in the locked house brings the real detective into the story, Bob slowman, who has "a prodigious intuition" allowing him to reach a conclusion Professor Richard "can only arrive at after fastidious and methodical effort." Slowman is a detective halfway between Sherlock Holmes and Sexton Blake who makes some astonishing deductions about the locked house mystery, which places a crown witness in their hands. A witness who has to be protected at all costs. So they decide to place him inside an impenetrable bunker.

A bunker with walls and ceiling a meter thick and four meters of earth on the top and around it. The floor is a concrete slab and the thick, steel door has two bolts on the inside and can only be opened two keys – one of them in possession of the Gouverneur Militaire de Paris. Sentries are placed all around the bunker. Nobody could have gotten inside to kill their prized witness, but the next day they have to cut through the door frame with a blowtorch. What they find inside is a familiar scene: a dead man with a bullet in his heart. I can see why Pugmire picked The Thirteenth Bullet to translate. The premise alone is great and while the solution has a core element locked room readers will recognize, Lanteaume unexpectedly turned the idea on its head. It also helped a lot that the locked room-trick is the strongest clued part of the plot. You can't figure out what peculiarity connects all the victims together or how that links up with the fabulous motive, but there are definitely clues to the locked room-trick. And when you know how it was done, you know who has done it. Or so you think. Lanteaume keeps throwing twists, surprises and dangers before, during and after the unmasking of the "super-criminal" who had terrorized an entire nation.

The Thirteenth Bullet is a glorious, unapologetic flight of fancy and can stand with the best pulp-style locked room mysteries, but you have to appreciate Fearn and Verner to be able to appreciate Lanteaume. I sure did. Hopefully, translations of the other two novels by the French Talbot will not be far behind.