Last month can be nicely summed up as "weak tea" as the quality, plot-wise, as most of the plot were diluted either by the changing times, blending genres and an early parody of the detective story – only D.L. Marshall's went all out with his plot in Anthrax Island (2021). But when even Gosho Aoyama's Case Closed series failed to end the month on a somewhat upbeat note, the time had come to pull another old favorite from the bookshelf. 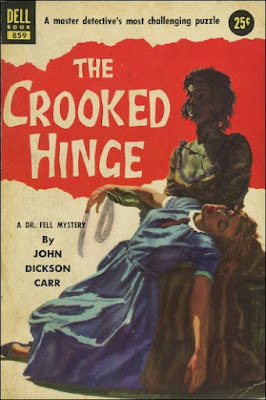 I wanted to return to John Dickson Carr's The Crooked Hinge (1938) ever since rereading Agatha Christie's Death in the Clouds (1935) back in June, because they are generally considered to be among their better mystery novels that never quite reached the classic status as a Murder on the Orient Express (1934) or The Three Coffins (1935). They are more like fan favorites. Another reason why I decided to finally give The Crooked Hinge a second look is that, like Death in the Clouds, is it unusual link to the pulps of the period. Christie presented the murder aboard the Prometheus as the pulpiest of pulp murders, but told and resolved like a proper, fair play detective story. Carr took a slightly difference approach, but more on that in a minute.

So, while The Crooked Hinge is not as lionized as some of Carr's better-known locked room mysteries, it has Carr at the top of his game as a plotter and storyteller. I had forgotten how brazen, in-your-face he was here when it came to dropping clues and red herrings. For example, Carr began the first chapter with the following quote from Professor Hoffman's Modern Magic (1876): "the first rule to be borne in mind by the aspirant is this: never tell your audience beforehand what you are going to do. If you do so, you at once give their vigilance the direction which it is most necessary to avoid, and increase tenfold the chances of detection! We will give an illustration." This is only the signal for curtain up! What follows is a play on the famous Victorian-era case of the Tichborne Claimant that's as brilliantly told as it's totally baffling.

The present-day Sir John Farnleigh used to be the younger, troublesome son of the late Sir Dudley and Lady Farnleigh, "a dark, quiet, wild sort of boy," who had "a fully-grown-up affair with a barmaid" aged fifteen – which is when he was packed off to the United States. However, John sailed on the unsinkable Titanic, but he survived that famous 1912 disaster and continued to live in America for nearly twenty-five years until his brother died. So he inherited the family title and returned to England to take possession of the thirty thousand pounds a year estate, Farnleigh Close. Newly minted Sir John settled down to live the life of a country squire and married a girl he knew from his childhood, Molly Bishop, but, a little over a year, a claimant to his estate turns up. A man named Patrick Gore says he has "absolute proof" that he's the real Sir John Farnleigh.

A meeting is arranged between Sir John, Gore and their respective lawyers, Nathaniel Burrows and Harold Welkyn, which hardly brings any clarity to Gore's claim. Burrows requested a lawyer friend, Brian Page, to be present during the confrontation, but he has no idea who's telling the truth. Page observes that, if Gore is an impostor, "he was one of the coolest and most smooth-faced crooks who ever walked into another man's house," but, if Sir John is an impostor, "he was not only a slippery criminal behind that naive straightforward mask." He was a would-be murderer as well. There is, however, a way to tell who's speaking the truth. The real Sir John had a tutor, Kenneth Murray, whose hobby has always been scientific criminology. Murray had taken the real Sir John's fingerprints with a Thumbograph, "a popular game or toy at the time," in 1910. This makes the old tutor a prime candidate to be murdered while he's comparing the prints in the library... in an ordinary detective novel. The Crooked Hinge is not your ordinary detective novel. 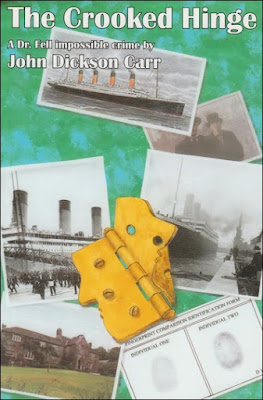 So, while Murray is alone in the library and everyone is wandering around the place, someone has his throat brutally savaged at the edge of the pool in the garden, but the victim had been seen standing, all alone, in that circular open space all round the pool with a five-foot border of packed sand between the water and nearest hedge – bare of any tell-tale footprints. One of those pesky impossible crimes! Enter Dr. Gideon Fell, snorting and wheezing, who proclaims that "all rules have been violated because the wrong man had been chosen for a victim" The death blow should have fallen on the old tutor as he held the vital evidence to costly conundrum. There you have the setup to a problem as intriguing as it's maddening, but also comes with the first of only two caveats. Sometimes less is really more and there's something appealing to the simplistically complicated problem of two rival claimants, but some of that initial appeal is lost once the body is discovered and Carr goes all out on the plot. Fortunately, it's the master himself who serves the reader an extra thick slice of plot, but couldn't help but wonder what could have been had The Crooked Hinge taken a similar, more sober approach as Death Turns the Tables (1941).

Anyway, the plot, as mention, becomes quite tricky once the murder has been committed and is complicated by a murder that has been committed in the village a year prior. A spinster had been strangled to death and the murderer appeared to be a passing tramp who had died while trying to escape from the police, but then witchcraft begins to rear its ugly head. This strain of witchcraft can be traced back to the locked book-closet in the attic of Farnleigh Close, which stores an antiquarian treasure trove of old books on magic and witchcraft. The locked book-closet also houses a damaged, time-worn automaton, The Golden Hag, which is a "nearly life-sized figure" sitting "on a kind of small couch" and had been exhibited at the court of Charles II in the late 1670s. One of the characters affectionately refers to the automaton as "my good old clock-guts," but, whatever made the automaton work in the seventeenth century, is now lost to time. Or could such a thing spring to live despite its old, time-worn wheels and whatnot's? That's merely one of the reminders the classic ghost and horror genres lost one of their greatest writers to the detective story. 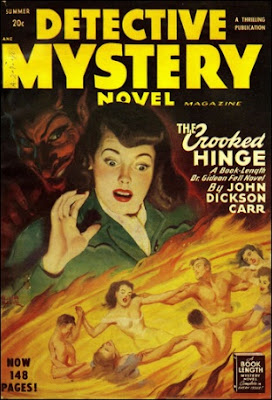 I fanboyed in my reviews of The Problem of the Green Capsule (1939) and The Reader is Warned (1939) all over Carr's almost unrivaled talent to simultaneously spell out the truth and throw sand in the eyes of the reader, but nowhere else was he as brazen and cavalier as in The Crooked Hinge. If you remember the solution from your first read, you begin to notice certain choices of words and phrases or questions being asked that become amusing when you know the solution, but he becomes really bold as the story progresses. One line, in particular, stands out as it comes long before the ending and practically tells you how the trick was done, which he casually tossed into the story – either to be overlooked or ignored as mere story-dressing. It's not only the clueing and misdirection that made The Crooked Hinge a delightful detective story to revisit as the plot never ceases to form new complications and surprises. Such as the dreaded inquest scene throwing an entirely new complexion on the problem and one of the characters or Dr. Fell's excellent and convincing false-solution towards the end.

So, as you can probably guess, The Crooked Hinge stood up to rereading. However, I did mention there were two caveats and the second one concerns the solution, which is probably where the book looses some readers. The whole trick, hinging on the imagery of the titular hinge, has both feet firmly planted in pulp territory and remember that detracted from my first read. Not enough to bar it from my 2015 list of favorite Carr novels, but thought at the time it was more like a Chestertonian nightmare played as a straight detective story than a proper impossible crime novel. Over the past few years, I have gotten more acclimatized to the pulp-style mystery and admired to see how Carr succeeded in making an outlandish, pulp-style mystery work as a straight detective story. Even more so, if you consider the solution had to subvert the impossible crime with even the murderer admitting "that there never was an impossible crime." Quite a tricky thing to do! I can also understand those who would hate it or prefer the false-solution, which is probably why it never acquired a similar reputation as The Three Coffins, The Judas Window (1938), She Died a Lady (1943), Till Death Do Us Part (1944) and He Who Whispers (1946). It has its fans. Just not enough to push it all the way to the top.

All of that being said, The Crooked Hinge comes highly recommended. Not as an example of Carr's mastery over the locked room mystery and impossible crime story, but as a craftsman of the detective story as a whole. Showing why Carr should be mandatory reading for everyone who wants to write detective fiction as he understood what makes a detective story tick like few others did or do.

Notes for the curious: back on the now long-gone JDCarr forum, a member whose name I don't remember posted a brief summary of the solution set to the tune of Pinocchio's "I've Got No Strings." If I remember the comment correctly, The Crooked Hinge version of the tune originated with the mystery reading portion of Disney employees during the 1940s or '50s. Since that comment and poster has been lost due to the old internet decaying away, why not post it here for prosperity. But it has to be ROT13 as it spoils everything:

Lastly, why has The Golden Hag never turned up in any other locked room mystery or impossible crime story? Not necessary by Carr. I would like to see one of our modern locked room specialist, like James Scott Byrnside or Paul Halter, write a locked room story in which that creepy automaton turns up after its adventure in The Crooked Hinge. Or maybe a historical mystery by Paul Doherty that tells the forgotten story about the impossible murders that occurred during its unveiling at the court of Charles II. The Golden Hag is a tailor-made object to cart around the genre, even if it's used only as background decoration. Just have it turn up every now and then in a locked room mystery as a running gag.