Murder in a Peking Studio (1976) by Chin Shunshin

Chin Shunshin was a Taiwanese-Japanese novelist and translator who achieved fame as a writer of historical novels, "concerning China, Chinese history and Chinese people living in Japan," which often tended to be presented as detective stories – counting "those interested in historical novels as well as mystery aficionados" among his readership. Chin's historical mystery novels have been compared in Japan to Robert van Gulik's Judge Dee series. While "there are rarely more than one or two killings in his novels," Chin and Van Gulik knew how to integrate a detective story plot into their historical and geographical settings. A number of prestigious awards came his way including the Naoki Prize, the Japanese Mystery Writers Association Award and the Edogawa Rampo Prize. Chin apparently was the first writer to be awarded all three prizes known collectively as Japan's Triple Crown (san ōkan). 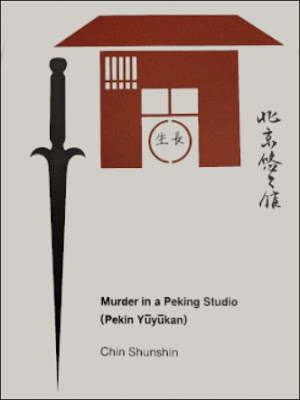 So when Aidan, of Mysteries Ahoy, posted an interesting review of the book in 2020, "exploration of a moment in history which felt pleasantly neutral and felt that the solutions to the puzzles were handled and explained well," I decided to finally track down a copy. I'm really glad I did! Murder in a Peking Studio turned out to be a first-class historical mystery with a locked room puzzle, which has since become a historical bridge between the honkaku and shin honkaku periods of the Japanese detective genre. A bridge constructed over the drab, murky waters of social realism that dominated the Japanese crime fiction at the time. More about that in a moment.

Murder in a Peking Studio takes place on the eve of the Russo-Japanese War, in late 1903, when "Russo-Japanese relations were extremely strained" in the wake of the Boxer Uprising as Russia refused to withdraw its troops from Manchuria, which had invaded the region to restore order and now attempts were underway to legitimize their occupation – trying to sign "secret treaties" with the Chinese. A second Sino-Russian treaty would have given Russia "military control, administrative powers and other rights and privileges in Manchuria," but the treaty had been revoked under international pressure. Meanwhile, the anti-Russian atmosphere in Japan grew, because they believed Korea and their own country were going to be invaded next. Japan began to "feverishly preparing for war" with Russia's refusal to withdraw as justification, but they "can only strike against an unprepared enemy" and Russia still had not "attained sufficient strength to declare war." But reinforcements were slowly dripping into the territory via the Siberian railway. So while Japan was preparing to go to war, the Russians "were probably contemplating how to avoid war." Or, to be more precise, delay it. China understandably has a problem with "foreigners arbitrarily starting a war on Chinese territory" and shares its longest border with Russia. Naturally, the Chinese have ample reason to prevent a Russo-Japanese conflict and that can be accomplished simply by taking away the Japan's motive to go to war with another Sino-Russian treaty. A perfect time and place for political intrigue, bribery, foreign spies and bloody murder. 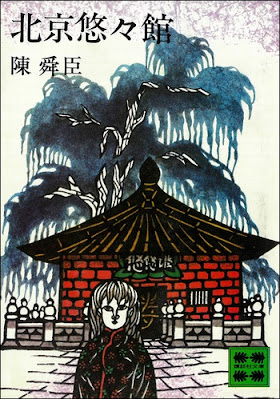 Doi Sakutarō is about to end his apprenticeship, as an antique dealer, at the Kawara Firm when an old acquaintance working for the Foreign Office asks him to go to Peking to work on "an extremely important case." Doi has to go to Peking to meet with another Japanese national, Nasu Keigo, who instructs him to reestablish contact with the well-known Wen Pao-t'ai. A celebrated Chinese artist known for "his techniques of inscription rubbing," but Wen also acted as a pipeline for high-level bureaucrats and politicians to receive their bribes. The pipeline through which the bribery money is pumped has a physical representation in Wen's private studio, the Residence of Comfort. A small, Western-style workshop detached from his house with a single door and tiny, barred windows. Wen uses the studio to peacefully work on his inscription rubbings and meet with people through his role as a pipeline.

The fanatical locked room fans among you can already see a third use for the Residence of Comfort, but the locked room murder, impossible theft and subsequent investigation do not occur until a little before the halfway mark. Until then, Chin has to do some world-building, or reconstructing the past, in order to setup the detective story part of the novel. So you get a ton of historical and cultural background information of the situation at the time and, yes, there's a sidetrack into the art of inscription rubbing. So the first-half of Murder in a Peking Studio is not unlike the first-half of Akimitsu Takagi's Shisei satsujin jiken (The Tattoo Murder Case, 1948), which also has a plot rooted in the culture and period of the time. Although one is a historical mystery set in pre-war Peking and the other in a contemporary detective novel that takes place in post-war Tokyo. Needless to say, Chin followed through on his obligation to do something meaningful with his historical setting, but what about the plot? More importantly, the promised locked room murder!

So, around that halfway mark, Doi and Nasu delivered 250,000 yen in bribery money to Wen, but, once outside, they realized Wen had forgotten to write them a lyrical receipt ("a spectacular view of Peking is worth one million") and his personal maid, Fang Lang, hurries back to studio to get him to write a receipt – only problem is that he doesn't open the door. They heard Wen bolt the door behind when they left him, merely three minutes ago, but during that time he had been stabbed to death with peculiar-looking, poison-smeared dagger while alone in a locked studio. And the bribery money they had left behind in the studio had "disappeared like smoke." 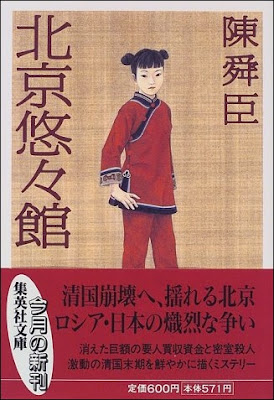 A great locked room setup and betrays the influence of Van Gulik on Chin as the whole locked room situation is closely-modeled on the impossible crime from Van Gulik's Labyrint in Lan-fang (The Chinese Maze Murders, 1956). An ex-general who's writing poetry is stabbed to death with a poisoned blade while alone in his private and secure library, bolted on the inside, but Chin came up with a better, more fairly clued solution to the problem. And added a second, decent enough impossibility to boot! I found the discussion of possible solutions to the locked room puzzle equally fascinating as it would become a link between the locked room stories of the early honkaku and shin honkaku periods. One of the possibilities considered is the murderer having dropped the knife from the studio's skylight, which is a locked room-trick introduced to Japan by a Western detective novel that was of enormous influence on a young Seishi Yokomizo (namely SPOILER/ROT13: Ebtre Fpneyrgg'f Zheqre Nzbat gur Natryyf, 1932). Yokomizo even mentioned that novel in his debut locked room mystery, Honjin satsujin jiken (The Honjin Murders, 1946), which also has an impossible double murder in an annex building with a blade playing a key-part. Five years after Murder in a Peking Studio, Soji Shimada published his seminal detective novel, Senseijutsu satsujin jiken (The Tokyo Zodiac Murders, 1981). Arguably, the most iconic of all (Japanese) corpse-puzzle mysteries, but also features a locked room murder in a Western-style studio with a bolted door, barred windows and skylight that becomes the centerpiece of a false-solution somewhat similar to the one here.

So, as an armchair genre historian and hobby plot-technician, I found it fascinating to discover how snugly Murder in a Peking Studio into the history and development of the Japanese detective genre. I wonder if Chin had to disguise his detective stories as historical fiction to indulge in a locked room mystery, because social realism still dominated the genre in 1960s and '70s until Shimada inspired a bunch of upstart students in the 1980s to revive the traditional detective story in all its glory! Chin was just a little early to the game.

One more thing that needs to be mentioned is that it's not Doi and Nasu who solve the case, but a quasi-official adviser to the police, named Chang Shao-kuang, who "studied detective methods in Japan and England" – which under normal circumstances would have been useless. At the time, the country was "administrated through the arbitrary decisions of the court, the military power of local warlords and corruption," but Chang was able to market his study of foreign detective techniques. Chang even won the favor of Prince Chen who introduced him to the chiefs of the Peking police and told them "if any case prove to be too much for you, do call on Mr. Chang." A good detective-character who seems wasted as a one-and-done character.

I think some readers will find the first-half of Murder in a Peking Studio slow-moving and tough on historical content as Chin describes the political and cultural woes of the time and region, but absolutely necessary as a solid foundation for the plot. Chin beautifully dovetailed the story's historical setting, political shenanigans and international espionage with a good, old-fashioned locked room mystery. The only real flaw to be found (a very minor one) is that the story began to drag its feet to draw out the ending a bit. There's even a last twist to the solution given fifteen years later. But not without reason. So, on a whole, Murder in a Peking Studio is exactly what a historical detective is supposed to be and merits reprinting. A reprint will find a much larger, more appreciative audience today than in 1986 and perhaps a new edition can open the door to new translations. Fogel briefly goes over several of Chin's untranslated detective novels in his introduction and Sanshoku no ie (Tricolor Family, 1962) sounds like a prime candidate to translate next as the plot deals with "a bizarre murder that occurs in a wholesale marine produce shop." Highly recommended!