Last week, I reviewed a short story by Anthony Wynne, entitled "Footsteps" (1926), which is one of thirty-some magazine stories he wrote during the 1920s and one of dozen to be selected for inclusion in Wynne's only collection of short stories, Sinners Go Secretly (1927) – exclusively turning to novel-length mysteries with his fifth novel, The Dagger (1928). A good, fun enough short story, but a story that demonstrated Wynne belonged to a previous era of the genre. The tragedy of Wynne is that he would have been remembered today as Father of the Locked Room Mystery Novel had he written novels like The Silver Scale Mystery (1931) and The Green Knife (1932) around the turn of the century. I think a lot of readers today would have been more forgiving of his dry writing, flat characterization and penchant for Victorian-era melodrama, while being more appreciative of his imaginative plots and locked room-tricks. 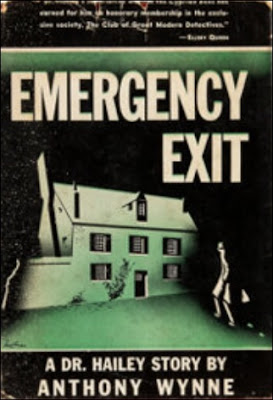 Just remember that Israel Zangwill's The Big Bow Mystery (1892) and Gaston Leroux's Le mystère de la chambre jaune (The Mystery of the Yellow Room, 1907) have pretty much the same shortcomings as Wynne, but they came early in the game and considered today as trailblazers. Moving the impossible crime away from secret passages, deadly animals and bizarre contraptions. Wynne's locked room mysteries and impossible crimes would have left an indelible mark on the genre had his first detective novel, The Mystery of the Evil Eye (1925), been published a quarter of a century earlier.

So imagine my surprise when discovering Emergency Exit (1941) completely demolished Wynne's image as an out-of-time writer that had emerged from the small sampling of his 1920s and early '30s detective fiction. Anthony Boucher called it "studious and static," which is not wholly untrue, but Wynne had largely dispensed with the dowdy melodramatics in favor of sober storytelling, better characterization than usual and very well realized backdrop – blacked-out Britain during the bombing campaign known as the Blitz. That gave Emergency Exit a very different feeling from the old-world atmosphere that permeated The Silver Scale Mystery and The Green Knife, but just as good as an grand-old locked room mystery!

The reader who dislikes a long preamble to the murder can rejoice, because Emergency Exit begins with Wynne's series-detective, Dr. Eustace Hailey, getting deposited on the doorstep of the recently murdered Sir Andrew Miles.

Sir Andrew was "a financier of international repute" whose "business interests embraced a large part of the world," but, as can be case with self-made millionaires, he "hated the idea that the world would go on after he had left it." So he found the idea of getting smashed by a bomb "outrageous, monstrous, intolerable" and the bombing worried him enough to erect an air-raid shelter outside of his house. A large, comfortably furnished shelter with two bunk beds, an electric fire, a wireless set and a thick rug covering the parquet floor. Every time the warning sounded, Sir Andrew would go at once to his shelter and not reappear until the All Clear was given. That's what happened on a Monday, two days before Dr. Hailey was called upon, but a bomb dropped nearby less than a minute after Sir Andrew had entered the shelter and the entrance was "sealed up by rubble." There were only two set of footprints in the snow leading to the shelter and the emergency exit, "the usual opening filled with loose bricks," remained untouched without any footprints in the snow. But when the rubble is removed, the body of Sir Andrew is discovered with a smashed skull and a knife sticking out of his back. And that spells trouble for the person who had been with Sir Andrew in the shelter.

Pilot Officer Thomas Brooke, a hero of the Battle of Britain, had followed Sir Andrew to the shelter to tell him he intended to marry his daughter, Veronica, but Sir Andrew wanted his daughter to marry a peer and had went as far as arranging a marriage with an impoverished peer, Lord Whitehouse – even willing to pay a dowry of £30,000 once Veronica becomes Lady Whitehouse. One of many things his son, Rex, couldn't stand about his father. There's always the business side to consider. Sir Andrew's solicitor, Basil Scragge, tells Dr. Hailey "everything was frozen, unsalable" due to the war and "the man didn't know whether he was a millionaire or a beggar." 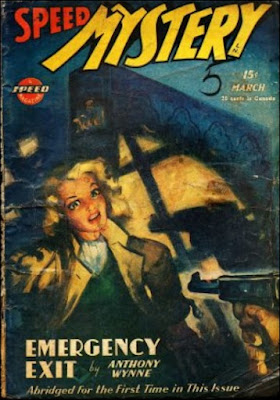 So there you have intimate little murder mystery with a very small cast of characters largely confined to single location, but, throughout the story, there's the sound of air-raid sirens, the far-off "wow-wow" of bombers and anti-aircraft fire. Heavy gunfire that made the clouds tremble, red stars zigzagging across the sky and "blazing pieces" of an enemy plane streaming down to earth with "long ribbons of sparks" that slowly disappeared in the rain. Not to mention the bomb that interacted with our little locked room puzzle. A very well done piece of background scenery enhancing an otherwise routine setting and loved how a stiff upper lip was the response to these regular, hellish spectacles right above them. Dr. Hailey even remarks, "one gets bored with it" as "the performance is repeated too often." Only the British can have their cities regularly bombed, yawn and sleepily mutter “bloody krauts” before going back to sleep to the sound of anti-aircraft gunfire and exploding bombs. Now imagine how Americans would have responded, if New York had gotten bombed just once.

Anyway, Dr. Hailey is not convinced of Tom Brooke's apparent guilt, but there are two complicating factors. Firstly, Brooke "was injured in the head during the air battle for which he got the D.F.C." and the head injury might have lead to the murder. So he's more afraid of getting locked up in Broadmoor as insane than he's of the hangman. Secondly, it's "simply incredible that anyone could have entered or left the shelter without leaving footprints in the snow." So, if Brooke didn't kill Sir Andrew, who did and how did that person manage to get away and leave the snow unruffled? As to be expected, Wynne included false-solutions to the locked room problem, but not as many as usual or as many as I remember from my previous reads. There are only two here. One is suggested by Dr. Hailey in Chapter XIII and very convincing in it's utter simplicity, while the second false-solution is the subject of several experiments. Interestingly, a second attempt does not discredit the false-solution and it's even suggested that the murderer, while performing the clumsy trick, could have been blow away by the blast of the bomb and flung into the firs and larches – which "would act as a spring mattress." And it would leave no footprints in the snow. Say what you want about Wynne's ability as a writer, but, as a plotter, he sure knew his way around a locked room mystery!

There are, however, a few minor smudges. The actual locked room-trick, while not bad, is workmanlike and missed the ingenuity of The Silver Scale Mystery or even the creative angle he found in The Green Knife. The murderer is not too difficult to spot, but the who has an extra dimension to it and the motive is not without interest. And the explanation of the book title is something worthy of Wynne's more celebrated contemporaries! A last, very minor quibble is that it would probably have improved the story, if Colonel Wickham, of Scotland Yard, had either been the sole investigator or did all the legwork and brought his findings to Dr. Hailey in the last couple of chapters. Now he was too much like a wandering non-entity waiting for his cue to resume his role as detective. I think Colonel Wickham as the lead investigator and Dr. Hailey as a last-minute armchair oracle would have fitted the so-called humdrum style of Freeman Wills Crofts and John Rhode.

So, on a whole, Wynne's Emergency Exit is a competently plotted and capably handled detective novel with some genuine clever touches (e.g. the book title), but where the story surprised is the characterization and storytelling. The outbreak of the Second World War seems to have sobered Wynne's style and characterization, which made the story all the more readable. Although there was a pinch of melodramatics in how Wynne dealt with the murderer, but then again, the finale is probably the best place to have some dramatics. That probably makes Emergency Exit the best candidate to be reprinted next. If a publisher like British Library decides to reissue Emergency Exit next, I hope they keep fanatical locked room fanboys, like myself, in mind and make a twofer with The Case of the Gold Coins (1933).