John Ferguson was a Scottish clergyman, playwright and novelist who wrote ten detective and thriller novels between 1918 and 1942 with half of them starring his newspaper reporter, amateur criminologist and police consultant, Francis MacNab – debuting in The Man in the Dark (1928) and bowing out in Death of Mr. Dodsley (1937). Ferguson has been called "one of the most delightful stylists in this genre" and "a very collectible author." Not merely because Ferguson's novels have been out-of-print for decades with copies becoming both scarce and expensive, but also for the often beautiful jacket illustrations of the original hardcover editions. 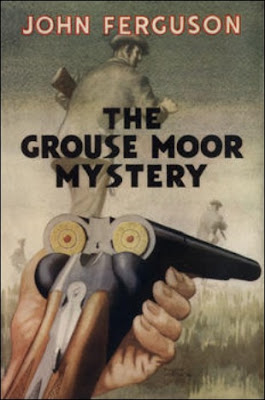 In 2017 and 2018, Coachwhip Publications reissued three of Ferguson's novels, Death Comes to Perigord (1931), Night in Glengyle (1933) and The Grouse Moor Murder (1934), two of which feature his series-detective, Francis MacNab. I don't exactly remember how The Grouse Moor Murder ended up on the big pile or who may have recommended it me, but it was about time it got picked off.

The Grouse Moor Murder, originally published as The Grouse Moor Mystery, has a premise as simple as it's complicated and the Arrochmore affair came close to being failure on the resume of several detectives ("...the sting of defeat was sharp enough to keep him awake half the night"). It also tells two very different type of detective stories with the book being split in two parts and the story swapping detectives halfway through. But let's begin at the beginning.

A group of five young man, Eric Brent, James Toplis, Gerald Harwood, Philip Cresswell and Ronald Joliffe, foolish decide to go shooting on the moor when "the mist lay down there like a snowdrift" and a dangerous situation is bound to happen – which happens when one of them gets shot. Apparently, Brent stumbled in the mist and accidentally shot himself. A careless, nearly fatal shooting accident until the local policeman, Sergeant Cameron, begins to notice things that turns an accident into an attempted murder. Most importantly, the two unspent cartridges in the breech of the victim's gun, indicating "it was another gun that knocked him over," but whose gun was it? Sergeant Cameron needs very little time to narrow down his list of suspect to just one person, but alas, things never turn out to be that easy in a detective story, do they?

Sergeant Cameron is not a bumbling Lestrade, but a competent, intelligent and observative policeman whose superior, Superintendent Rintoul, is the perfect whetstone to his character. Superintendent Rintoul likes to play devil's advocate whenever one of his underlings brings him a case by acting "exactly as he anticipated any counsel for the defense would subsequently act if proceedings were instituted," which meant he "never sent up a case which was not safe to secure a conviction." That's exactly the kind of dynamic you want in a detective story constructed out of building up cases, before they're demolished. Such is the case with Sergeant Cameron's first suspect and case against this person, because the evidence as he found it turned out to tell a different story. So he has to go on as a gang of local poachers enter the picture with the possibility Brent had been mistaken for his host, Mr. Willoughby, who had a hand in a local man getting a sentence of six months for poaching. That made for some bad blood. After all, poaching "was hardly considered a crime in that countryside."

The first-half of The Grouse Moor Murder immediately invites comparison with Freeman Wills Crofts and John Rhode, but Ferguson reminded me of two other members of those unfairly maligned "humdrum" writers, J.J. Connington and especially Henry Wade. The ghost of the Great War lingers on and even has a physical representation in "three little strips of particolored silk ribbon" on the left breast of Sergeant Cameron's tunic, which he earned fighting in France. Those three bits of ribbon moved young Constable Munro "to a hopeless envy," but the local, pro-poacher opinion is that "quite a lot of us here have done a bit of shooting in our time, though we don't plaster three ribbons on our chest to make a boast of it." One of those little historical details that give the story a sense of time and place. 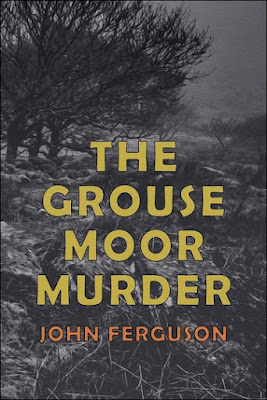 So while Cameron, Rintou and Munro try their best to find the person who attempted to kill Brent and camouflage the crime as a hunting accident, they're eventually forced to call upon an outside specialist when Brent is murdered – disguised as a suicide. Brent apparently shot himself in the library of the house where he was recuperating with the door locked, the windows closed and the key to the door in the victim's coat pocket. Ah, yes, now I remember how The Grouse Moor Murder ended up on the big pile. The book is listed in Robert Adey's Locked Room Murders (1991), but don't expect anything remotely clever or worthwhile. The locked room is only a small piece of the puzzle with a very plain, unimaginative explanation (ROT13: n qhcyvpngr xrl). However, the moment Francis MacNab arrives on the scene, you can feel the story shifting gears from a 1930s police procedural to a 1920s style drawing room mystery.

MacNab enters the picture as a dour Scotsman and reluctant detective who got lured away from his fishing holiday, but recognizes he would see the case through to the end. If only to prevent to free the innocent "upon whom suspicion might fall" and "might cling for years to come." He begins his investigation by entering a three-day incubation to mull over all the known facts, before he becomes more talkative and probing, but he has about as much success as the local police with every lead and possibility becoming dead-end tracks. For every clue or smashed alibi, something new turns up to discredit them. Even the traps MacNab sets out for the murderer either remain empty or lead him down another wrong track, which continues until close to the end when MacNab finally begins to grasp the truth and even then he has railroad a witness to fill out some of the blanks.

However, the solution is like all the detective work in the story: good, competent and unshowy. There are some clever touches to the solution pertaining to the guns, cartridges and those pesky alibis, but don't expect any fireworks a la Agatha Christie or John Dickson Carr. Just some good, old-fashioned police and amateur detective work that turned up a clever killer who tried to be a little too clever and cute. And nearly got away with it! So the most striking about The Grouse Moor Murder is not its plot, but everything around it. From the cast of fallible detectives and the local color of the Scottish moors to the local and historical color. I should also note that the book include a detailed, artistically-done sketch of the crime scene from Sergeant Cameron's notebook and the original cover illustration is a small work of art, which really should have been reused for the Coachwhip edition. If your taste runs in the directions of writers like Connington, Crofts, Rhode and Wade, you'll find a competent and solid contemporary in Ferguson's The Grouse Moor Murder.

A note for the curious: as you can imagine, the locked room angle left me a little disappointed and, as usually is the case, I began to imagine how the trick could have been improved without changing the story too much – only one possibility occurred to me. What has to be done is lock the library door and have the key turn up in the victim's coat pocket, which can be done in two other ways. An easy one and a difficult one. The key at first appeared to be absent until they went through Brent's coat pockets and whoever found the key could have put it there, but that would have made Superintendent Rintou the murderer. So that's no good. On to the difficult solution. Somewhere, the story mentions the doors in the house have fanlights above the doors. Firstly, the murderer carefully removes a glass pane out of the fanlight. Secondly, a strong piece of thread or fishing line has to be threaded with a needle through the coat pocket with both ends going through the now open panel in the fanlight. Thirdly, the murderer locks the library door from the outside, pulls one end of the thread through the head of the key and carefully slides the key down the thread until it's inside the pocket. Lastly, the murderer pulls the thread back through the opening and puts the glass pane back in place. This method leaves two clues behind for the detectives to discover: a needle mark in the fabric and fresh putty. Just one problem. The murderer needs a little more time than Ferguson allowed to make this trick work, but the best I could make with what the story gave me.

Anyway, I hope some of you liked this bonus solution to the locked room and I'll try to pick a non-impossible crime next. Perhaps it's time to return to Brian Flynn!