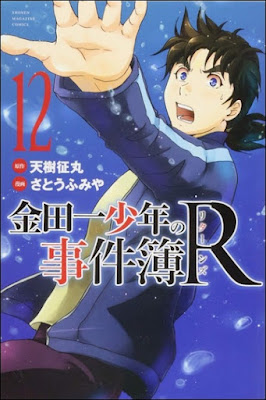 The story takes place on a remote, practically uninhabited, island with a haunted history where a group are marooned in the company of a murderer who can strike in a seemingly impossible fashion. No less than three impossible crimes and two of them provide the story with more alibis than even Inspector French could handle. Where the Seiren Island Murder Case differentiates itself from the average, formulaic Kindaichi story (that's you, Doll Island Murder Case) is how well it utilized the visual format of manga (comic book) to simply show what would have been difficult to illustrate in prose. So what otherwise would have been hard to follow, visualize and swallow, becomes easier to accept as you can see what actually happened. This is one of the clearest examples in the series of making a tricky and complicated plot appear more convincing than it would have done in text with one or two diagrams. But let's begin at the beginning.

Hajime Kindaichi and Miyuki Nanase accompany Inspector Kenmochi, of the Metropolitan Police Department, to Seiren Island to compete in a two million yen fishing competition. Apparently, the inspector used to be quite a pro in fishing.

So the competition provides the story with a relatively large cast of characters. There's a team of doctors comprising of Ushio Kojirou, Kanno Mika and Professor Kageo Kazehiko. A team consisting of two employees of medical manufacturing companies, Izumaru Ken and Wanise Takashi. There's a writer, Uryuu Akane, who's present to gather material together with her editor and photographer, Okunogi Musashi. A producer and cameraman of South Island Cable TV, Nagita Kuuya and Umihoshi Shuugo, are there to "record every action" the competitors make. Kijima Takahiko is an employee of Otowa Island Commercial Company who's in charge of the fishing competition. Lastly, there's the only, 87-year-old inhabitant of the island, Kirigoe Hiruko, whose only companion is the sad, ghostly wailing of "The Siren" like "an island that cries in grief." Why did she welcome them to Gravestone Island? A portent of things to come!

The Seiren Island Murder Case has another trademark of the series: bizarre architecture and layout. The competitors sleep in stilted cottages, above the sea, which are connected through a series of bridges to each other and a bigger cottage in the middle – which gives access to dockyard with two cottages. The big cottage and the two smaller cottages are linked together three bridges running in an almost triangular circle (see image below). During the first, early morning of the competition, the teams try to reach the dockyard, but the door to the small cottage is found locked. When they look through the window, they see the body of Professor Kageo Kazehiko lying face down in the small cottage with "a spear through his back." They hear a sound coming from the inside and witness a weird light streaking above the sea, as if someone is trying to escape through the other side, which is why rush to the other cottage to cut the murderer off. And, when they arrive and open the door, there's the body of the professor on the floor again! Everyone was accounted for at the time. So they all have pristine alibis, but the presence of a third party on the island is equally unlikely.

As noted above, the comic book format of manga gives the opportunity to show instead of telling and you can get away with a lot more as you don't need an illustrated, chapter-length explanation of the trick. This is a really good example of how a complicated trick can be simplified without dumbing it down to the point where you can roughly work out what happened. Only the Japanese appear to realize the still largely untapped potential the visual medium gives a good plotter and writer. While this double conundrum of a locked room mystery and alibi factory would have been sufficient as the central puzzle of the plot, The Seiren Island Murder Case tosses two more, distinctly different impossible crimes at the reader. I loved the second impossibility. 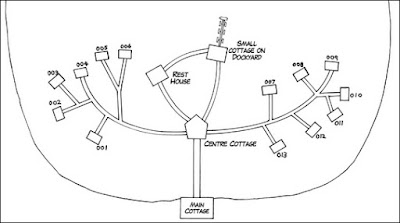 After the murder, the island is rocked by a storm, the engines of the boats malfunctioned and all the food has disappeared or rendered inedible. So they have to fish in order to eat. Kindaichi and Kenmochi are part of the second fishing expedition, but the third person with them is dragged down into the sea and drowned in front of their eyes. And when the body resurfaces, "no wound like a shark bite was found." So, if it wasn't shark who pulled the victim into the sea, what else is capable of dragging an adult with almost supernatural strength to his death? Admittedly, the solution to the trick borders on the pulp, but it was very well done. A kind of trick that can only be compared to the third impossibility in W. Shepard Pleasants' The Stingaree Murders (1932). A third and last murder is staged that technically qualifies as an impossible crime, but the impossibility is used to give the remaining people on the island another round of unimpeachable alibis. So more of a borderline impossibility than anything else. However, the trick behind had more to it than initially expected.

The Seiren Island Murder Case has more than enough to offer to mystery fans who love picking apart locked room mysteries and demolishing alibis, but don't overlook how craftily these tricks interact with their surroundings. Or how the surrounding interacts with the human-made structures on the island. There's some nice and even beautiful synergy in the story between the natural, artificial and even a strange hybrid of the two pertaining to the subplot of the old woman, the unsettling wartime history of the island and the legacy it left behind – given shape in the form of the ghostly wailing. The shrieking of the Siren turned out to contain a code only the original islanders can decipher. Sounds completely nuts, I know, but the answer was surprisingly convincing. Convincing in a detective story, that is. But, on a whole, The Seiren Island Murder Case is a richly told, intricately-plotted and thoroughly enjoyable entry in the series.

Only smudge on the plot is the identity of the killer and accompanying motive, which offered less inspired takes on the series formula, but not enough to demote it as a first-class contribution to the series. Particularly as an excellently conceived and executed howdunit stuffed to the gills with alibis and impossibilities. I enjoyed it so much, I might take a look at The Demon God Ruins Murder Case before too long. So stay tuned!