The Case of the Russian Cross (1957) by Christopher Bush

The Case of the Russian Cross (1957) is Christopher Bush's 50th detective novel and celebrated his Golden Jubilee by dedicating the book, "in sheer astonishment," to himself, which is a little weird, but taking the history of the series into consideration, Bush had ample reason to be self-congratulatory – adapting and changing with the times like few of his contemporaries. Curt Evans wrote in his introduction to the new Dean Street Press reprints that "new fashions in mystery fiction were decidedly afoot in the 1950s." Bush was ahead of the time and slowly began to transform Ludovic Travers from a special consultant, or unofficial expert, to a private investigator beginning with The Case of the Kidnapped Colonel (1942). Finally ending up as the owner of the Broad Street Detective Agency. 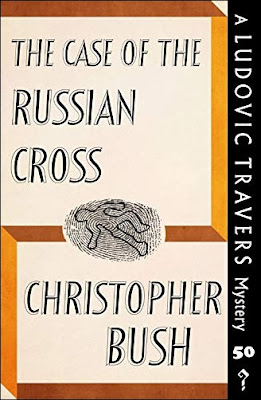 A chance in direction likely influenced by the American hardboiled school of detective fiction and in particular Raymond Chandler's Philip Marlowe novels (see Evans' introduction to The Case of the Magic Mirror, 1943). Unavoidably, there was a transitional period during which the quality of plots took a hit as the series began to shed its Golden Age baroqueness, notably The Case of the Seven Bells (1949) and The Case of the Fourth Detective (1951), but Bush was back in the game by the mid-1950s. The Case of the Three Lost Letters (1954) and The Case of the Flowery Corpse (1956) present a "more modestly decorous but still intriguing and enticing mystery fare," which becomes all the more impressive when you realize the author had turned 70 when he wrote The Case of the Russian Cross.

The Case of the Russian Cross is a good example how time completely changed the world Travers had come up in as that "virgin innocent of those far-off days" when he "first begun working with George Wharton." And how he, and Bush, had to adapt to those changes.

So the opening chapter begins with Travers telling of an unfortunate incident at the Old Bailey, where he had to give evidence in a murder trial and expected that his statement "would be taken, as it usually was, as sheer hard fact," but the defending counsel turned inside out about his status as "an unofficial expert" – calling him "a queer expert, surely, who was unaware of his own speciality." Not at all like the good old days. Even worse, there's a new Commander Crime at the Yard, Forlin, who's "a stickler in the matter of the proper and conventional." Travers not unjustly had a kind of foreboding Forlin would make things difficult, if Wharton or Chief Inspector Jewle would request his cooperation. That's what happened when the Harper Street Case broke and Wharton told him he would not be called in ("I wished the Harper Street Case would be one of the Yard's greatest flops"). So now he only has the small, often mundane and routine cases of his detective agency to occupy his mind.

The first-half of the The Case of the Russian Cross covers three such routine cases, apparently unconnected, but frustratingly full of dead ends and cold trails. Firstly, Travers is approached by the wife of a client, Lady Rose Penford, who's credited by her husband as the power behind the throne. She's hardly a public figure ("a nonentity by a good many standards"). So how did a blackmailer manage to get hold of an obscure, closely-guarded secret between her and a mutual friend? The friend is a now well-known painter and during a period when they were both struggling, Lady Penford posed in the nude while he made sketches. And there was a male model (not while she was there). But he had to turn the sketches into "beastly, horrible things" to decorate the yacht of a rich Greek. Now the sketches were stolen and used as blackmail material. Travers turns down the case after speaking with the artist and concluded "the one thing he didn't want was for the blackmailer to be found." 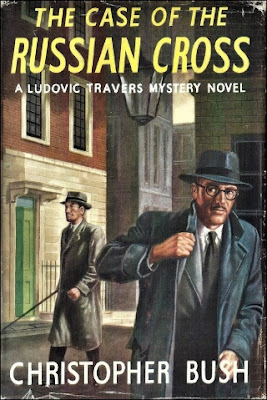 During the second case, Travers acts on behalf of United Assurance to investigate an insurance claim with "several queer points about it." Mrs. Alysia Rimmell is an elderly, but spry, widow who kept her jewelry at the bottom of a trunk in her bedroom and now they were gone. One item is particularly valuable, "a cross of some five inches by three given to a great-great-grandparent by the then Czar of Russia" of "solid gold and set with five very large diamonds in the main stem and one each side on the cross stem" – making seven in all. Mrs. Rimmell hadn't look in the trunk for a good many years and can't tell, exactly, when they were taken. So the trail could be stone cold, but there's an additional, quasi-impossible mystery attached to the Russian Cross. There's a 1893 photograph of a young Mrs. Rimmell wearing the cross at a fancy dress-ball, showing the diamonds were missing, but Mrs. Rimmell swears with "the frankest innocence" the stones were there when the photograph was taken. A 30-year-old valuation report from United Assurance proving the stones were back and "no mention is made of their having been removed and re-set." If this plot-thread had been played up a little more, it would have qualified as full-fledged impossible problem.

So why and how were stones removed sixty years ago and when, exactly, was the cross stolen, but too much time has passed to cost effectively close the case. Travers move on the third and apparently most simply case of the three. Travers is asked to find out where a convicted swindler upon his release is going to lodge, because the Danish widow of his victim wants him to return the money. Travers knows there's something fishy about her accent, but, this time, accepts the assignment. Through all these three cases, minuscule details emerge establishing very slight links between them and turns deadly serious when the charred body of a man is pulled out of a bonfire on Guy Fawkes Day.

Travers never mention in the story he handled a body-in-a-bonfire before, The Case of the Bonfire Body (1936), but he should have as the novels perfectly contrast early-and late period Bush. The Case of the Bonfire Body is an intricately-plotted, golden delicious with two closely-linked murders, faked identities and cast-iron alibis. An unmistakable, 1930s Golden Age detective novel. While having a busy, multi-threaded plot, The Case of the Russian Cross is ultimately simple, straightforward and grounded in the reality of post-Empire Britain – concentrating mostly on reconstructing the past and tracking down people. So more a case of establishing facts than the elaborate theorizing from the 1930s and even '40s novels. In my reviews of The Case of the Counterfeit Colonel (1952) and The Case of the Flowery Corpse, I noted how Bush appeared to have turned to the type of detective fiction he likely enjoyed reading during the 1910s and '20s. Namely the Realist School, of R. Austin Freeman, which dominated the British detective story during those decades. But it turned out to be the perfect vehicle for the direction Bush decided to go into in the fifties.

The Case of the Russian Cross stands as a good example of how Bush applied realism to carry his series into the second-half of the 20th century. For example, I thought it added a lot to the story how Travers had to maneuver as he tried to both assist Jewle and keep one step ahead of him to secure his own, independent position in the case. A very small, seemingly insignificant details, but fascinating considering when and how Travers got his start as a detective in the twenties (e.g. The Perfect Murder Case, 1929). And shows how much things have changed since the war.

So this one is perhaps not to everyone's personal taste (plot purists have been warned), but, if you're a fan of the Bush and Travers, The Case of the Russian Cross has a lot to recommend.