Previously, on Beneath the Stains of Time, I returned to Hake Talbot's two novel-length contributions to the locked room and impossible crime genre, The Hangman's Handyman (1942) and Rim of the Pit (1944), while back in 2020 I reviewed one of two of his short stories that made it to print, "The High House" (1948) – which left me with only one short story to reread and review. A short story with an unusual backstory as fascinating as it's frustrating. 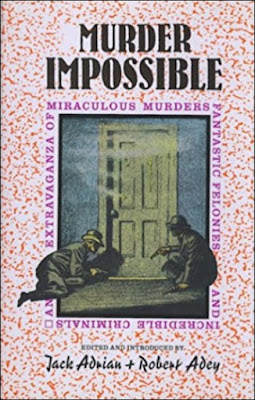 Hake Talbot wrote "The Other Side" sometime in the 1940s, but the manuscript remained unsold and unpublished until it posthumously appeared in Jack Adrian and Robert Adey's Murder Impossible: An Extravaganza of Miraculous Murders, Fantastic Felonies & Incredible Crimes (1990). Nevertheless, the story previously appeared in Swedish to pad out the page-count of a Swedish reprint of Rim of the Pit. Something that very well could have spared "The Other Side" from a similar fate as most of Talbot's short stories. According to Adrian and Adey, Talbot wrote more short stories featuring his professional gambler and ex-convict detective, Rogan Kincaid, but nearly all "remained unsold and were either destroyed by their author or simply disappeared." This also happened, "horrifyingly," to his third detective novel, The Affair of the Half-Witness. One can only imagine the wonderful horrors Talbot conjured up in those now long-lost short stories and novel. But now to the story at hand.

I noted in my previous reviews how Talbot, not unjustly, tends to be closely-linked to John Dickson Carr and "The Other Side" has been compared to one of his famous locked room mysteries. However, I think it's the least Carr-like of all his novels and short stories as it lacks that dark, brooding atmosphere of an omnipresent evil and actually takes place in a sunny, cult-plagued Hollywood, California. So the storytelling, setting and plot, were more reminiscent of G.K. Chesterton's "The Eye of Apollo" (collected in The Innocence of Father Brown, 1911) and Anthony Boucher's Nine Times Nine (1940) than any of Carr's short stories or novels.

"The Other Side" opens at a shooting gallery where Rogan Kincaid and Svetozar Vok, who previously appeared in Rim of the Pit, catch the attention of a young heiress, Daphne Lathrop, who's escorted by two elderly military men in mufti, Colonel Boyd Lathrop and Major Clifford Lathrop – who are her uncles. Colonel Lathrop recognizes Kincaid and asks him to come along with them, because "they felt called upon to explain their niece's interest in Vok." Daphne had been brought up by her normally levelheaded aunt and guardian, Miss Imogene Lathrop, but she had fallen under the influence of a Hungarian cult leader, Ergon. She had made a will appointing Ergon as guardian and instructed her brothers "to obey him without question," which naturally doesn't sit well with her uncles. Even more so when Ergon tells them he has "communed with the Forces" and they decided Daphne "shall be dedicated to the Temple."

Kincaid overhears a heated confrontation between Ergon and Colonel Lathrop, which ends with Ergon cursing the Colonel, "you have spoken your doom. Unless I can intercede for you, you will die by your own hand." Several minutes later, "the bark of a pistol" announced that the colonel had apparently died by his own hand while alone in the living room. Kincaid had the hallway under observation, the windows were latched and the screens were stuck to the paint. Ergon possesses "a hole-proof alibi" as he was heard chanting in the adjacent apartment and three witnesses saw him come out of his own apartment after they heard the shot. So how could he possibly have shot the colonel? I always loved this too rare take on the inverted mystery in which you know whodunit, but not how it was done.

The locked room-trick, or variation on it, is what earned "The Other Side" its comparison with that John Dickson Carr novel, but something tells me Talbot noticed how the principle behind Carr's trick could be used to improve on the impossible situation from Boucher's Nine Times Nine – dashed it down as "The Other Side." So not a blistering original locked room-trick, but serviceable enough and the story's only real problem is the same that can be found in "The High House." Talbot evidently needed a novel-length canvass to work his magic to full effect, especially in the plotting department. Such as the clueing, or lack thereof, which is only vague hint in the direction of how the colonel was shot (ROT13/SPOILER: "...jubyr ebj bs ncnegzragf vf bar ybat ohvyqvat ernyyl. Bayl cnegvgvbaf orgjrra. Urne rirel jbeq ur fnlf"). But it would have been a much bigger help if the reader was told about (MORE ROT13) gur yvtug svkgher gb gur evtug bs gur svercynpr.

So his two short stories have better storytelling than plotting. "The High House" has the same “dabbed-in touches of the macabre” as The Hangman's Handyman with its lore of the oceans and a native curse from a distant island coming back to haunt a seafaring family, but missing the intricate plotting. Similarly, "The Other Side" has better storytelling than plotting with the highlight being a mesmerizing battle-of-the-minds between Vok and Ergon. You can see how much more Talbot could have done with the plot material and how he could have improved on some of its shortcomings. Like the clueing or the messy handling of the gun, which might be another reason why he didn't destroy the manuscript. Maybe he intended to one day expend the story into a full-fledged novel. Either way, I'm grateful "The Other Side," despite its flaws, was preserved long enough to eventually be published by Adrian and Adey.

So, while "The Other Side" is a fun, well-written mystery, it lacks the sheer complexity, fairness and pure showmanship of his two Rogan Kincaid novels and shows Talbot was more adept at writing novels than short stories. Why does "The Updated Mammoth List of My Favorite Locked Room Murders & Impossible Crimes" already feels outdated?