Pushkin Vertigo finally released the eagerly anticipated, English translation of Seishi Yokomizo's celebrated detective novel, Gokumontou (Death on Gokumon Island, 1947/48), which has been on my wishlist to be translated since reading the Stone Bridge edition of Inugamike no ichizoku (The Inugami Clan, 1951) – translated and published all the way back in 2007. Ho-Ling Wong called Death on Gokumon Island the "most respected Japanese mystery novel" with "one of the best hints" as the central clue. Death on Gokumon Island is together with Yatsuhakamura (The Village of Eight Graves, 1949/50) and The Inugami Clan three of Yokomizo's most famous and parodied novels. So it left a sizable footprint on the Japanese detective genre that even non-mystery fans recognize. 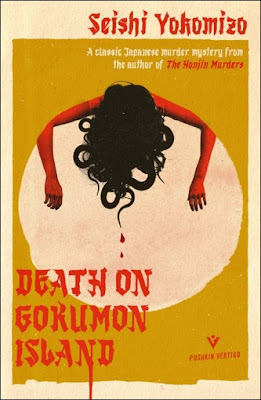 Death on Gokumon Island was originally serialized in Hôseki from January 1947 to October 1948 and only published as a book in 1971. So not a historical mystery, as some reviewers believe, but an authentic, post-WWII Japanese mystery set in 1946 when demobilized soldiers were still returning to a completely uprooted country.

One of these demobilized soldiers journeying back to Japan is the well-known private detective, Kosuke Kindaichi, whose division suffered a crushing defeat in 1943, retreated and met up with other divisions – ending up in Newak, New Guinea. There they found themselves cut-off from their main army and ignored by the Americans who "paid no heed to the little battalion that had been left there" as they were "making great strides elsewhere." During his time stranded in New Guinea, Kosuke Kindaichi befriended Chimata Kito and was tending to him when Chimata had caught a severe kind of malaria. A disease that eventually caught up with him when he was traveling with Kindaichi back to Japan on board of a repatriation vessel. A dying Chimata asks Kindaichi to go to, "please go to Gokumon Island in my place... save my sisters... my three sisters will be murdered." Kindaichi goes with a letter of introduction to that strange, out-of-time island in the middle of the Seto Inland Sea.

Gokumon-to, or Gokumon Island, means Hell's Gate Island and has a history as long as its colorful with as many interpretations of its name. From the Nara Period of the eighth century to the seventeenth century of the Edo Period, the Seto Inland Sea was infested with “daredevil pirates” and Gokumon Island was their northern stronghold. There are remnants of an old pirate fortress on the highest point of the island, which had been put to use during the war for aircraft surveillance and anti-aircraft guns. During the Edo Period, the "isolated island of granite, thick with red pine trees," sparsely populated with fishermen who descended from the pirates of the past, became a place of exile. Every criminal in the district who had their death sentence commuted were imprisoned on this island. And they intermarried with the locals.

So the small, insular and close-minded population with "pirate and prisoner blood running in their veins" became an isolated community where the "bonds of feudalism" between the fishing chief and the fishing folk in the village remain strong – even "stronger than between landowners and tenant farmers" in an old-world village. The most powerful fishing boss and patriarch of the Kito family, Kaemon, passed away as his two beloved grandsons, Chimata and Hitoshi, were drafted to fight abroad. So the Kito household was left in the hands of Chimata's cousin, Sanae, but the household can be described as a troubled one. Yosamatsu is Chimata's father and should have succeeded Kaemon as head of the Kito family, but his mind became unhinged and now lives locked up in "a kind of caged cell they made specially for him" in the house. Chimata has three half-sisters, Tsukiyo, Yukie and Hanako, who at best are incredibly immature and at worst slightly unhinged themselves. Kaemon's former mistress, Okatsu, still lives with the family, but there's also a branch Kito family headed the second most powerful fishing boss on the island and his wife, Gihei and Oshiho. They have been extending their hospitality with a handsome-looking ex-soldier, Shozo Ukai, who had been stationed on the island during the war. And not without setting the village aflame with rumors. 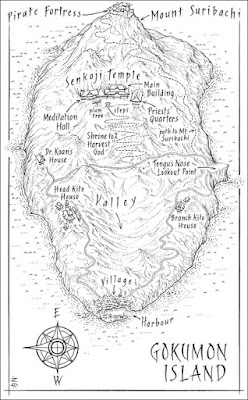 Kosuke Kindaichi arrives on the island with a letter of introduction addressed to "the three elders of the island," Ryonen the priest, Mayor Araki and Doctor Koan Murase, who can also be seen as the three administrator. It doesn't take very long before Kindaichi "felt a wave of foreboding wash over him" and realizes how difficult his mission is going to be.

It's not until an official communiqué arrives informing them of Chimata's death that things begin to kick off. A formal funeral ceremony is going to be held the next day and a funeral wake to be held that very night, but, during the wake, Hanako simply disappears. Hanako's body is found after a brief search "hanging head down from the branches of the plum tree" on the temple grounds. A "crazy, utterly insane" murder, but Kindaichi suspects "the island's peculiar ways must have had some profound effect on both the murderer's motive and method." Hanako is not the last person to be murdered under strange and bizarre circumstances, of which the second and third murder present the reader with two impossibilities. However, I can't say anything about the circumstances qualifying them as (minor) impossible crimes, because they have a very different function here than your normal, traditional locked room mystery – namely (SPOILER/ROT13) cebivqvat gur zheqrere jvgu ebpx fbyvq nyvovf. One of those murders is going to be contentious as (MORE ROT13) gurer'f ab pbafrafhf ba jung dhnyvsvrf nf na vzcbffvoyr nyvov, but the phrase (ROT13) “culfvpnyyl vzcbffvoyr” was used. So I think it's save to say Yokomizo agreed with my point of view.

There is, however, more to the plot of Death on Gokumon Island than the well-hidden impossible angles to two of the murders than can openly be discussed without spoiling the story.

First of all, I've now read four of the best-known Kosuke Kindaichi mysteries and while I've no idea how representative they're of the seventy-two other novels in the series, Yokomizo is beginning to emerge in these translations as a regionalist mystery writer. Just like S.H. Courtier, Todd Downing, Elsepth Huxley and Arthur W. Upfield, Yokomizo's fiction drips with local color, culture and history in addition to creating a murder mystery that feels exclusive to the setting. The murders in Death on Gokumon Island genuinely feel like they're indigenous to the titular island and could not have taken place anywhere else on the planet. That greatly benefited the who-and why, which under different circumstances circumstances would have come across as contrived and slightly unbelievable. But here, it worked like a charm! Secondly, there's that all-time great clue Ho-Ling mentioned. If I'm thinking of the right clue, Louise Heal Kawai delivered an inspired piece of translation deserving of some praise. Ho-Ling has written on his blog before about how important language is in the Japanese detective story and how difficult it can be to translate certain linguistic elements in languages like Dutch or English. But is it one of the all-time greatest clues? It certainly is a good clue, perhaps even a great clue, but undoubtedly worked even better in Japanese. Regardless, it's a good clue and not the only one to be found in this well-clued detective story. Lastly, I loved the fitting ending to the story. After the case is tied-up, the island braces itself to face a new tomorrow ("if Japan is revolutionized, then Gokumon Island will be too") as a departing Kindaichi "placed his hands together in a posture of prayer as he bade farewell to Gokumon Island" ("bless you") as he sailed out of sight of the island. Almost as if the traditionally-dressed Kindaichi had to be present to close a chapter of history. I can see why the series struck a chord of nostalgia during the Yokomizo Boom of the 1970s.

So, all in all, Death on Gokumon Island is a beautiful, intricately-plotted detective novel full with unbalanced characters, bizarre murders, strange clues and local color with my review only touching on a fraction of the plot. An first-class translation of a giant landmark of the Japanese detective story that had been long overdue. Highly recommended!

A note for the curious: I hastily crammed this review in between scheduled blog-posts and came at the expense of the previous post, "Curiosity is Killing the Cat," in which I dumped my personal wishlist of rare, out-of-print detective novels that sound too good not to reprint. So you might find something on there for your own wishlist.