Ruthven Campbell Todd was a Scottish-born artist, critic and poet who wrote eight lighthearted, tongue-in-cheek detective novels in the mid-1940s, published as by "R.T. Campbell," which mostly star his botanist and amateur meddler, Professor John Stubbs – a character who was obviously modeled on John Dickson Carr's Dr. Gideon Fell and Sir Henry Merrivale. These amusing takes on the detective story seemed to be well on their way to being forgotten, until Dover Publications started reprinting the series in 2018. 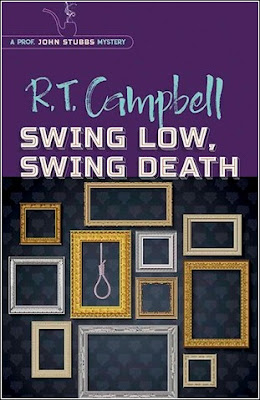 I've already read and reviewed Unholy Dying (1945) and Death for Madame (1946), which left me with Swing Low, Swing Death (1946), but the book turned out to be, for better and worse, the weirdest, most unorthodox, of the lot. Now, before I can get to the good stuff, I need to talk about the bad first.

Firstly, there's a continuity issue that really bugged me. Peter Main wrote an introduction for the new Dover editions and provided a list of all published Professor Stubbs novels "in the order they were presumably written," based "on references that appear within them to previously occurring events," but Swing Low, Swing Death is listed last and introduces a character, Ben Carr, who had a prominent role in a previous novel – namely Death for Madame. So it can't have been a very close examination of the series, because this continuity error stands out the moment his name is mentioned. There's another character, Douglas Newsome, who previously appeared in The Death Cap (1946), which has its solution (name of murderer + method) spoiled on the third page "Part 2-Chapter 1: The Joy of Return." So the reader has been warned!

Sure, these are very minor issues, smudges really, which should not negatively affect the overall story, or plot, but that's where the biggest problem of the book rears its ugly snout: Swing Low, Swing Death is not a detective novel.

Technically speaking, Swing Low, Swing Death qualifies as a detective novel, but it really is a satire on modern art cloaked in the feathers of a detective story. There's a body, a murderer, a closed circle of suspects and a detective with his Dr. Watson in tow, but there are barely any clues to mull over and the murderer stands out like a jarring piece of modern architecture. And the body doesn't make a public appearance until the second half of the story. Something that will grate and test the patience of readers who detest long buildups to the murder.

So what happens until the murder finally happens? Campbell shows the reader the preparations for the opening of Miss Emily Wallenstein's Museum of Modern Art and takes the piss out of the whole situation and the characters. You would almost get the impression he hated modern art and its puffy champions. 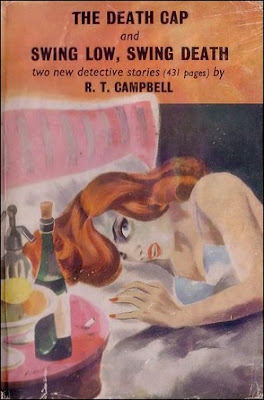 Miss Wallenstein is a millionaire's daughter with "a penchant for all that was modern" and surrounded herself with all kinds of modern monstrosities, such as fur-lined teacups, colored tubes of sand and pieces of junk, but she's about to open Pandora's Box on the unsuspecting populace of London with her Museum of Modern Art – first of its kind in London. She's advised by a pompous art-critic and "fashionable arbiter of taste," Cornelius Bellamy, who believes that his books are "the absolute essentials to anything in the way of an understanding of, say, a Miró, a Klee, or a Picasso." Bellamy latest discovery is Ben Carr, now an interior decorator, who festoons walls with disregarded rubbish. Carr himself "could not quite understand how he had become an interior decorator," but, if people wanted to pay him to cover their walls with rubbish, "he saw no reason why he should not humour them in their fancy." A job's a job. Douglas Newsome is a quasi-alcoholic poet who, somehow, became the gloomy librarian of the museum and tries to complete a catalog before the opening. The cast is rounded out by a gallery owner, Julian Ambleside, and an art expert, Francis Varley.

So, while they prepare a "brutal and forthright" exhibition with the sole aim to leave the visitors "insulted and outraged" and "to commit a mental rape upon their virgin security," the authenticity of a Chirico painting is questioned. A file is taken from the library archive, photographs disappear and a painting is slashed to ribbons, which culminates on opening night when the unveiling of a painting reveals a body dangling from a picture hook. This is the point where Chief Inspector Bishop, Professor John Stubbs and his long-suffering chronicler, Max Boyle, enter the picture. But don't expect much in the way of an actual detective story.

I suspect Campbell probably would have preferred continuing his satire of the modern art scene as his heart just wasn't in it during the second act. There a few bright spots. Such as Ben Carr's centenarian, gin-soaked mother and her "crazy logic," a cameo by Ruthven Todd and the final confrontation with murderer on the rooftop of the museum, but nothing more than that. Professor Stubbs was not as lively, or disruptive, as in previous novels and Boyle futilely hacked up his familiar lines ("I want a quiet life with nothing going faster than the germination of a seed"). The only real clue is a slip-of-the-tongue that could have had a perfectly normal explanation, which Bishop pointed out in the last chapter. Not that you needed that clue to spot the murderer, but it's all a little disappointing coming after Unholy Dying and Death for Madame. Luckily, I still have Take Thee a Sharp Knife (1946) and Adventure with a Goat (1946) to look forward to.

So, purely as a detective novel, I can't recommend Swing Low, Swing Death unless you're a fan of the series, British comedy or hate modern art. And, in the last case, you don't have to read the second act.
Geplaatst door TomCat on 10/30/2020