"Before turning to those moral and mental aspects of the matter which present the greatest difficulties, let the inquirer begin by mastering more elementary problems."
- Sherlock Holmes (A Study in Scarlet, 1887)

"Sidney Miles" is the nom-de-plum adopted by a former resident of Blackfield on his return home, in the spring of 1887, to gather material for the novel he has been contemplating to write and intends to draw from a nine year old, unsolved murder case – which could've been ripped from the pages of an Edgar Allan Poe story.

The problem of a murder perpetrated in a sealed room fascinates "Miles," convinced one day studies will be devoted to the subject, and hopes future scholars will be poring over his fictionalized account of the impossible death of the local philanthropist. Richard Morstan had converted his study in a makeshift performance stage, partitioned by a curtain, to treat a group of children to a magic show. While Morstan is behind the curtain, someone, somehow, enters the room and the only evidence this person left behind was a body. 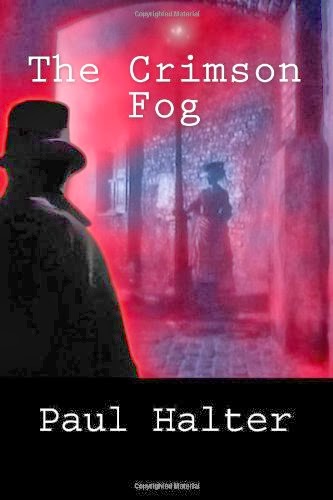 This is a conventional, but cautious, description of the opening of Le brouillard rouge (The Crimson Fog, 1988) and arguably Paul Halter's most ambitious detective/crime-thriller to be introduced into the English language by John Pugmire's Locked Room International to date. Reviewing detective stories can be a tricky business, but in this case I can barely allow myself to comment on a single plot-thread, because I don't want to give anything away. I would further recommend avoiding reading the back cover. It gives away information you should discover on your own. Like three-ways through the book.

Anyhow, "Miles" teams-up with Major Daniel Morstan, eager to do justice to the name of his brother, and the daughter of the local inn-keeper, Cora, who picked up maturing in his absence – and they decide he should pose as a detective from Scotland Yard. However, the murder of Richard Morstan is as a problematic as penning this review and was astonished at the possible solutions Halter left unmentioned. There was a door in Morstan's curtained-off section of the study, but it was nailed shut with three beams to eliminate any cheating and suggested (to me) the door could be prepped beforehand to open in-and outwards – and a stagehand/killer could squeeze between two of the three wooden bars. I could mention another one involving the open and watched window, but, again, I don't want to give away too much. I'll say this for Halter... he knew here how to keep clued-up mystery readers busy with multiple possibilities. For a while, I suspected the book of being a cleverly disguised homage to Carter Dickson's The Skeleton in the Clock (1948), with the titular crimson fog being a reference to "the pink flash," which gave me the idea for the open-window solution. 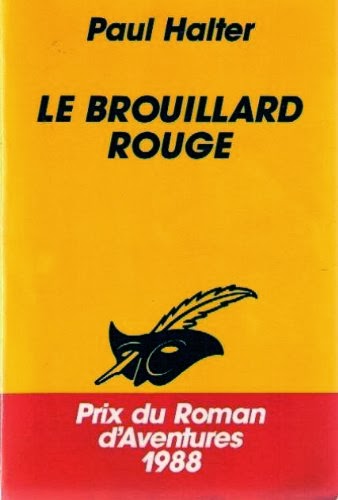 Naturally, their rooting around in the village and questioning witnesses has repercussions in a detective story, and before long, the phantom-like killer strikes again and manages to vanish from its pursuers under baffling circumstances. This impossible angle is repeated in the latter half of the book, but they're childishly simple, however, the impossibilities aren't the reason you should pick up a copy of The Crimson Fog. It's a modern take on those grand, France-feuilletons (e.g. Gaston Leroux's The Mystery of the Yellow Room, 1907), but Halter (as an Anglophile) placed this English-set mystery/thriller closer to American-style delirium tremens, such as Joel Townsley Rogers' The Red Right Hand (1945) and Fredric Brown's Night of the Jabberwock (1950), than to the British Golden Age serial killer novels – think Philip McDonald's Murder Gone Mad (1931) and Agatha Christie's The A.B.C. Murders (1936).

Nevertheless, Halter deals a fair hand to the reader (more than usual as far as I remember) and successfully walks the fine tightrope between a traditional whodunit and a Victorian slasher. The Crimson Fog is probably not everyone's poison of choice, but it's one of those books you have to sample for yourself.

One thing I want to point out, SPOILER (select to read): Halter's general weakness to breath life in his historical settings could've been a strength here by withholding the period until the Jack the Ripper-part came into play. The way Blackfield is described could've been anywhere between the late 1800s right up to the actual Golden Age and all that talk about early locked room mysteries would be clue as to the date of the story. I'm just saying.