Not Everything is Ancient History

The Friends of Cattesmoor are jubilant over their victory in court on the right-of-way and restoration of the Possel Way, a medieval pilgrim's footpath carving a route from west of Stoneham to the seaside resort of Biddle Bay, which partly runs through the grounds of Starbarrow Farm – reconditioned by the current owner, Jeffrey Ling, who bought the place for its remoteness. 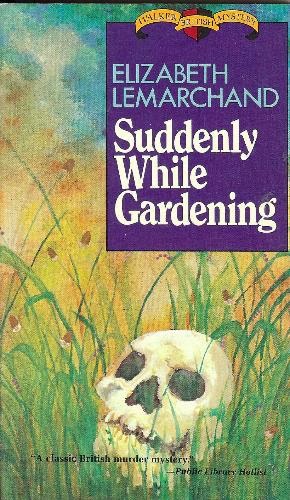 Suddenly While Gardening (1978) was published midway Elizabeth Lemarchand's career as a mystery novelist, taking the plunge with Death of An Old Girl (1967) and bowing out after The Glade Manor Murder (1988), but is virtually unknown today. Some scraps of information, here and there, qualify Lemarchand as a tradition, British writer of unchallenging, but nonetheless competent, cozies. Not my usual cup of tea, however, I was intrigued by reported use of archeology and history in her plots and the description also made me suspect Lemarchand may be an acquired taste like Gladys Mitchell. What I found could very well have been Caroline Graham's original Midsomer Murder novels, of which The Killings at Badger's Drift (1987) was the first. A year before Lemarchand published her final mystery. Interestingly, Lemarchand's series character, DSI Tom Pollard, has a DI named Gregory Toye and Graham's DCI Tom Barnaby has DS Gavin Troy.

The plot of Suddenly While Gardening would be easily translated to an episode of Midsomer Murders, in which Tom Pollard takes the family for a holiday in the countryside to visit his aunt, Isabel Dennis, who’s a member of the Friends of Cattesmoor – and from whom he learns about the Possel Way. Being a good tourist, Pollard takes the hike himself, but is stopped when he sees a group of walkers gathered around a Bronze Age grave (kistvaen) containing the skeletal remains of a human being. Pollard hands the case over to the local authorities, but is called back after returning home from holiday when a post-mortem revealed the bones belonged to a young man dead for no longer than fourteen months.

I found the idea of a police investigation focusing on the question of how and when the remains were disposed at the gravesite an interesting change, because Pollard and Toye were unable to concern themselves with possible motives. A lack of identity and cause of death made this mainly a case of opportunity for the body dump. Unfortunately, this never went further than tracking people's movements and the pace of the story made it feel as if Pollard was still enjoying his holiday. Pleasantly written? Yes. But it lacked a pinch of urgency. And the book is basically a novella-length short story (143 pages)! Anyhow, Pollard and Toye uncover another crime buried in the town, but the main trick was even when the book was published way behind its time.

Suddenly While Gardening is pleasantly written, leisurely paced, and, on a whole, not terrible as a (modern) detective story, but, if I ever return to Pollard and Toye, it'll be on account of their possible (literary) kinship to Barnaby and Troy from the Midsomer Murders. Yes. The title of the book is a bit of a misnomer.

To end this post on a positive note... BBC has released an episode title, The Letters of Septimus Noone, and synopsis for the new Jonathan Creek episode. The plot sure's enticing: an impossible murder during a West End musical production of Gaston Leroux's The Mystery of the Yellow Room in the locked dressing room of the theatre. It also sounds like the idea of David Cargill's currently working with for his third locked room mystery. Oh, ghost of Harry Stephen Keeler, will you ever grow tired of these pranks?
Geplaatst door TomCat on 2/07/2014