"And yet, who knows of Athelstan today..."
- Michael Woods (In Search of the Dark Ages).

I'll return to the trail of obscurity in the near future, which, knowing myself, will probably be somewhere next month, because there's still a slew of contemporary detective stories vying on the slopes of Mt.-to-be-Read for attention – and February is hardly enough to cover them all. So that's the program for now.

The Nightingale Gallery (1991) is the first tale from "The Sorrowing Mysteries of Brother Athelstan," set in the 13th century during the reign of Richard II of England, published under the byline Paul Harding. Of course, "Paul Harding" is the now discarded penname of historian Paul Doherty, who already garnered praise under his own name with the Sir Hugh Corbett-series, but the Brother Athelstan stories has the potential to become one of my favorite series of historical mysteries.

Prelude of The Nightingale Gallery is the passing of the old king, Edward III, which leaves the throne to a mere child, Richard II, but the question is how the passing of kings affected a domestic tragedy at the home of an affluent gold merchant. 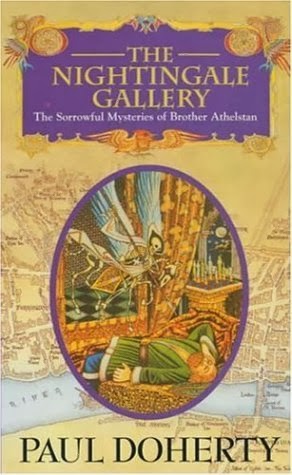 Sir Thomas Springall held a banquet on the night of his death, however, the poison that killed the merchant wasn't administrated during the feast, but in the claret of wine his servant Brampton brought him every night. Springhall was overheard arguing with Brampton and the latter was found swinging at the end of a rope in a garret. It's a neat and tidy case of murder/suicide, but Sir John Cranston, Coroner of London, has his own views on the deaths as does Brother Athelstan – a friar basically assigned to Sir John as part of his penance for his past sins. Nevertheless, there is a valid objection to their hypothesis of a double murder: the hallway to Springall's bedroom is named the Nightingale Gallery for the acoustic quality of the floorboards and they "sing" if you walk on them. It's a medieval burglar alarm, but one you can't temper with and they didn't sing on the night of the murder – except when Brampton brought Spingall's customary goblet of wine. Yes, it's another one of those pesky, locked room mysteries!

I first want to say I really enjoyed the main characters who were being introduced here and was particular interested in Sir John, who may've been modeled on John Gaunt from John Dickson Carr's The Bowstring Murders (1933) on the (bodily) scale of Dr. Gideon Fell. Someone who can withstand enormous amounts of alcohol without it effecting its thinking and there's one scene in which Sir John demonstrated he could listen attentively to a conversation, while apparently in an alcohol-induced coma. Brother Athelstan is an unusual character for Doherty, because, unlike Sir Hugh Corbett or Chief Judge Amerotke, there isn't a wife with children hovering in the background. There aren't loved ones here to treasure and protect. Just atone for the ones he allowed himself to lose.

The plot of The Nightingale Gallery also diverges from the later-period Doherty novels I have read in that it concentrates on the raffles of a single plot-thread, instead of multiple ones (e.g. Ancient Egypt-series), with clues, riddles and suspects abound! There's even a second poisoning in a locked room with an obscure potion.

Steve, a.k.a. "Puzzle Doctor," holding regular visiting hours at In Search of a Classic Mystery Novel, who probably introduced most of us to Paul Doherty, reviewed this book in 2011 and called it "one of the best mysteries that I've read for a while," adding "the impossible murder is very well done... there's enough here to work it out, but I bet you won't." Well, I solved the locked room angle and identity of the murderer without much difficulty, but I would put that down on having mostly read the later-period Doherty novels.

That withstanding, The Nightingale Gallery still stands as an excellently crafted mystery, which Doherty cloaked in the period setting of the story without attempting to romanticize history, which gives the story a great touch of the macabre when Doherty draws on his artistic license. For example, the part where Athelstan and Sir John meet Robert Burdon, a gate-tower constable, who, every morning, combs the hair of the rotting heads placed on spikes as a warning to other traitors and sings Lullaby's to them. You can understand the sequel, The House of the Red Slayer (1992), has ascended on my TBR pile.
Geplaatst door TomCat on 2/15/2014