A Fling With a Ghostly Thing

"This world is far more mysterious than we give it credit for."
- Victoria Coren (Q.I.: J Series, "Jargon")

Back in late November of 2011, I was handed the scoop on a new, collaborative series of mystery novels, concocted between Bill Pronzini and Marcia Muller, starring their 1890s San Francisco-based gumshoes from Carpenter and Quincannon: Professional Detective Services (1998) – among other uncollected short stories and some earlier, full-length adventures (e.g. Beyond the Grave, 1986).

Despite being the one who broke the news, I was fairly late with actually reading The Bughouse Affair (2013) and I didn't do much better with The Spook Lights Affair (2013). In my defense, however, the book wasn't supposed to be published until this year. But enough of this palaver and lets see if I can add anything of substance to the pile of reviews of this still recent release. 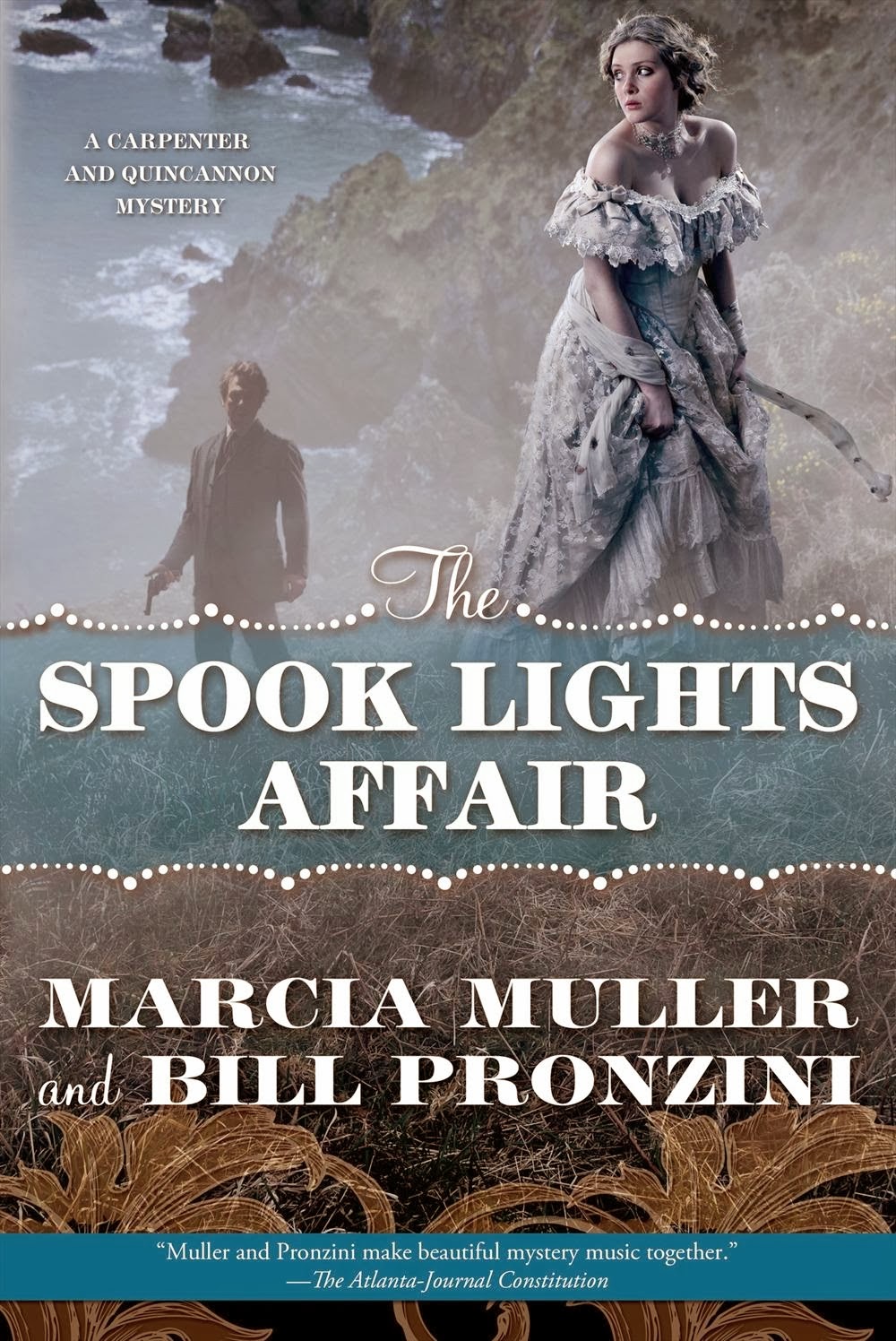 The Spook Lights Affair has John Quincannon, formerly attached to the U.S. Secret Service, and Sabina Carpenter, an ex-Pinkerton detective, assigned (once again) to separate cases, but you can't complain in what are still economic rough times – especially if your clients can afford to squander money on a private-eye. Sabina finds herself in the role of matron and has to "baby-sit" Virginia St. Ives, who's being watched by her family to prevent her sneaking off with Lucas Whiffing. The family does not approve of the young family, but the surveillance of Virginia cumulates in a confrontation at a fancy dress party and storms outside with Sabina in hot pursuit. Unfortunately, the only thing Sabina can do for Virginia is getting help after watching her jump to her death from a fog-enwrapped parapet, however, a search beneath the spot only turns up a handbag containing a suicide note and a piece of cloth. The body is nowhere to be found!

Somewhere, around the same time, the ghosts of Quincannon's forebears, who left the Old World for the New One, must've been living vicariously through their descendent as Quincannon goes above and beyond to get his hands on a ten percent reward in the case of the Wells, Fargo Express heist. A daring and masked robber relieved the company of $35,000 and Quincannon is determined to get his $3,500 cut for giving it back to them. Regrettably, a tip from a squeamish gambling addict, Bob Cantwell, leads the detective straight to a days old crime-scene and the traditional scuffles with suspects. I sometimes get the impression detectives related to the Hardboiled School take more bumps than a pro-wrestler on a Pay-Per-View night. All of the (semi)-hardboiled detectives I remember reading ended up trading blows or gunfire with one character or another in pretty much every single story I have read, which sometimes makes them come across as overconfident, street-level Batman's – all they need is alcohol, prospect of a fee, two fists and an ugly mug to land them on. I understand it’s tradition, but, writers, do you have to aim for the head every single time? Can't a guy get a door slammed in his face or his tires slashed every once in a while to get shaken off by his quarry? I'm just suggesting it doesn't always has to be an assault or attempted murder.

A third case is introduced when Mr. Barnaby L. Meekers, from the Western Investment Corporation, wants to engage on a "matter of bizarre nature," which turn out to be spook lights haunting a scattering of abandoned horse-traction cars nearby a beach at a place named Carvill-by-the-Sea (a.k.a. Spook Central). Meeker chased the apparition twice and described as a humanoid shaped, white glow and "the dune crests were unmarked along the thing's path of flight." There weren't impressions of any sort with exception of claw marks on the walls and roofs of the cars "as if the thing had the talons of a beast."

The explanation for the mysterious disappearance of Virginia’s body and the appearances of the Carville Ghost takes a page from the type of impossible crime stories dating from roughly the same period (in mystery terms) in which The Spook Lights Affair is set such as L.T. Meade and Robert Eustace's A Master of Mysteries (1898) and The Thinking Machine's dismissals of the supernatural. However, even though Pronzini and Muller weren’t able to fool me with their seemingly impossible trickery this time (nice try though), they were able to herd every part of the plot into a coherent narrative and The Spook Lights Affair simply works as a well put together mystery novel brimming with fascinating characters, exciting scenes and places from a by-gone time now forever altered by time. The brief interruption from the bughouse Holmes, which annoy Quincannon to no end, were also more than welcome and it's still funny picturing him as Jeremy Brett – playing the part of the "Scattered-brain" Holmes with the same conviction as that of the original. I hope he'll be back in the next novel.

I couldn't fit this in anywhere else, but if you've read Carpenter and Quincannon: Professional Detective Services, you'll notice that a scene towards the end of The Spook Lights Affair was borrowed from one the stories from that collection. I also posted in December on an actual (solved) spook lights case in my, ahum, popular series of real-life locked room mysteries and you can find that post here.

Well, in closing, I think it was the previous novel with a blurb saying Pronzini and Muller make beautiful music together, but Carpenter and Quincannon, like Sherlock Holmes and Dr. Watson, must be wonderful instruments to play on.
Geplaatst door TomCat on 2/02/2014